Mark Boyle is a passionate man.  Originally from Donegal and with a degree in Business, he had become preoccupied with the problems of the modern world that we are, more or less, all familiar with.  He came to the conclusion that at the root of the world’s troubles lay the fact that we have been cut off from nature, the source of our life’s daily needs, and that our dependence on money is the cause.  He decided to undertake an experiment in which he would live without the use of money for a year – an experience which formed the basis of his first book ‘The Moneyless Man’. 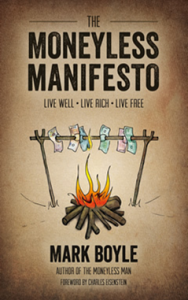 In this, his second book, Boyle looks at various aspects of our lives such as food, clothing, housing, energy, health, education, transport and leisure, and for each of these he suggests ways in which we might acquire or make the things we need without the use of money.  As might be expected, this is no easy task.  Take energy, for example.  Solar panels and wind turbines depend on the existence of the global industrial complex for their production.  They also cost a lot of money, and making them yourself would be somewhat impractical.  To get around these types of problems (for now, at least) the author suggests a hierarchy or ‘Progression of Principles’ model where things that cost nothing to make and which can be produced locally and freely are at the top of the hierarchy, and those which cost money and require industries to produce them are at the bottom.  The idea is to find solutions which rate as highly as possible on this ‘POP’ hierarchy.

A lot of work is involved in doing things like building your own house, making your own furniture, collecting your own wood, making your own candles, building an oven, making your own shoes, powering your own electrical appliances (from a manually operated bicycle, for example), making your own compost toilet, walking, cycling, making your own soap, toothpaste, laundry soap, paper, washing your clothes by hand, foraging, growing your own food, setting up your own grey water system, mending and making clothes, repairing broken objects, and so forth.   There’s a lot to do.  But would we be better off and happier doing these things than working in a job that we hate?  Boyle says we would, pointing out that people were living like this until just a century ago.  They had no electricity, no lighting, no central heating, no communication and no transport system (apart from a horse and carriage), and they still coped very well.

Boyle is a vegan.  However, he does suggest the use of ‘roadkill’ for making things like shoes and clothes, and for food.  Some vegans might be ‘ok’ with this.  Most probably would not.  Other suggestions include fishing, keeping bees for honey and keeping hens for eggs.  As the author lived successfully without any animal products during his time living moneyless, vegans can be assured that these are not in the least necessary for a sustainable way of life.

The book is an easy, enjoyable read and is intelligently written with lots of food for thought and ideas for further research.  It is also free to read online.