Three Levers for Food System Transformation in Support of Nature 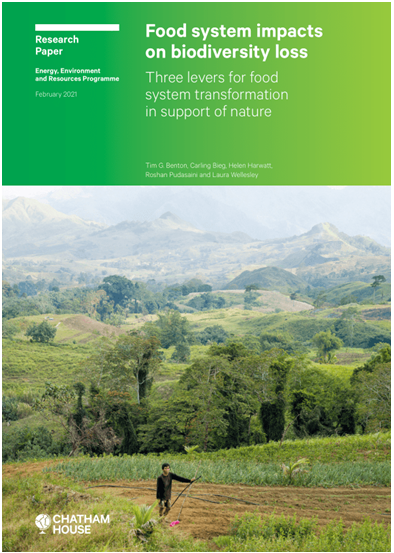 This Report highlights how the global food system is the biggest driver of destruction of the natural world, stating that a shift to predominantly plant-based diets is crucial in halting the damage.

The report highlights recent studies showing that the destruction of biodiversity is accelerating around the world. “The global rate of species extinction today is orders of magnitude higher than the average rate over the past 10 million years.  Over the past 50 years, the conversion of natural ecosystems for crop production or pasture has been the principal cause of habitat loss, in turn reducing biodiversity.”  It’s worth remembering that 77-83% of agricultural land use is for animal agriculture while producing only 18% of food calories consumed.  Just a 1000 years ago, only 4 million square kilometers – less than 4% was used compared to today’s 51%.

The report gives a thorough explanation of how farming destroys ecosystems and biodiversity.  It notes that: “Current food production depends heavily on the use of inputs such as fertilizer, pesticides, energy, land and water, and on unsustainable practices such as monocropping and heavy tilling. This has reduced the variety of landscapes and habitats, threatening or destroying the breeding, feeding and/or nesting of birds, mammals, insects and microbial organisms, and crowding out many native plant species.”

We know that food systems are also major contributors to global greenhouse gas emissions, driving climate change, which further degrades habitats and causes species to disperse to new locations. “In turn, this brings new species into contact and competition with each other, and creates new opportunities for the emergence of infectious disease.”

In its analysis of the underlying paradigm driving our food system the report states that: “Our food system has been shaped over past decades by the ‘cheaper food’ paradigm. Policies and economic structures have aimed to produce ever more food at ever lower cost. Intensified agricultural production degrades soils and ecosystems, driving down the productive capacity of land and necessitating even more intensive food production to keep pace with demand. Growing global consumption of cheaper calories and resource-intensive foods aggravates these pressures.”  While this is true, multiple other factors contributed including fossil fuel use, inappropriate technology (ploughing, pesticides, etc.), population growth, marketing of meat and processed food, etc.  A deeper understanding of our dysfunctional attitudes is presented in the wonderful ‘Rethinking Food and Agriculture‘, which states that we need “radical and fundamental changes in our anthropocentric, speciesist and human supremacist worldview and our attitudes and relationship toward the living world, including our relationships with other animals.”  By changing the food system we create a supportive environment for these attitudes to change.

The report states the simple truth that:

“Without reform of our food system, biodiversity loss will continue to accelerate.  Further destruction of ecosystems and habitats will threaten our ability to sustain human populations.”

The most important point in the report is that: “These three levers are in part interdependent. Most notably, the protection and setting aside of land for nature and the shift to nature-friendly farming both depend on dietary change, and will become increasingly difficult to achieve if continued growth in food demand exerts ever-growing pressure on land resources.”

The report also outlines different outcomes for ecosystems and climate and how business-as-usual will leave no space for other species and no allowable emissions for any other sector, while a plant based food system and tackling food waste would provide huge benefits.

The report’s authors believe that this year is a unique opportunity to reboot our food system.  The UN Global Biodiversity Conference takes place in Kunming, China from May 17 – 30 (COP15).  The first UN Food Systems Summit (UNFSS) takes place in New York in September. The next UN Climate Change Conference takes place in Glasgow from Nov 1 – 12 (COP26).  There will also be huge post COVID-19 pandemic investment to support an economic recovery.  Will these investments focus on an equitable, sustainable and compassionate future?  Finally, the report outlines three steps, which can be taken this year to bring about a healthy food system.

The report’s suggestions on how to establish a biodiversity-supporting food system?

The report is very worthwhile and an important addition to increasing our understanding of how a plant based food system can deliver our global and local health, climate and biodiversity goals and the actions we can take now to bring it about.  In Ireland we are advocating for this transition so vital to all species on our Nature Rising website.

While veganism is a popular and growing movement and the number of vegans has...

Worker Exploitation in Agriculture – the cost of Cheap Food

Slavery is endemic in many industries – in particular the chocolate and fishing industries...

6 Foods that help with Autoimmune Disease

If you or someone you know has an autoimmune disease, you know these illnesses...
Previous articleSave Bees and Farmers – European Citizens Initiative
Next articleRegenerative Vegan Agriculture is the Solution