“The Rebellion is here. We want to live!  Time is Running Out. We Want to live! We’re scared and tired but guess what?   WE’RE NOT DEAD YET!” 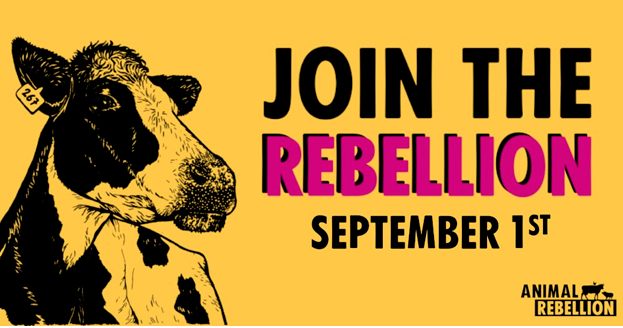 Animal Rebellion is a worldwide movement!

In 2019, a small group of Extinction Rebellion members recognised an omission in climate activism: no one was seriously addressing the relationship between people, animals, and the planet. And so, they formed Animal Rebellion to raise awareness about this gap and expose the impact animal agriculture has on the climate and all animals involved, human and non-human.

Now there are A LOT more of us. We are active in over 30 countries, including France, Spain, Mexico, New Zealand, Poland, Guatemala, South Africa, Israel, South America, North America and Australia. We continue to start new communities in all corners of the world that fight for a just and sustainable future for all: humans, animals, and the planet.

Animal Rebellion continues to fight alongside Extinction Rebellion but we carry our message: to save the planet, we must end animal agriculture and transition to a plant-based food system.

Animal Rebellion is a decentralised organisation run by volunteers. We all share the vision of a just and sustainable world, where animal agriculture has been replaced by plant-based farming and everyone is nourished and free. Animal Rebellion creates an opportunity for us to come together and fight for a food system that will be better for the planet and all those who inhabit it.

Our volunteers are integral to everything we do: they organise actions, communicate with our members, make demands on the Government for a better future, and so much more. Opportunities for volunteering are as diverse as we are, because we build around the passions of everyone involved. We value skills and experience from across the spectrum and are always looking for new people to join us.

An inclusive and regenerative culture is at the very heart of the movement. We are focused on creating system change and so do not require our members to make personal changes. We do not ask people to be vegan. We simply ask that they follow our principles and values, such as using a non-violent strategy to bring about change and not blaming or shaming others. We show compassion for people and animals, this includes standing in solidarity with farmers as we value these strong and positive relationships. Anyone who abides by our principles and values can take action in the name of Animal Rebellion.

Animal Rebellion will join Extinction Rebellion on the 1st September to rebel for animal justice, climate justice, and human justice.

Governments around the world have declared a climate emergency. We need urgent action to tackle this crisis.

In October 2019, Animal Rebellion, Extinction Rebellion, and many others demanded that the UK Government declare a climate emergency and commit to making radical changes to prevent further global warming and mass biodiversity loss. AND WE SUCCEEDED! As a direct result of our actions, a climate emergency was declared.

The October Rebellion began at Smithfield Meat Market with thousands of people peacefully protesting for a just and sustainable future. Smithfield was transformed into a beautiful and colourful fruit and veg market to symbolise what a plant based future would look like. However, the UK continues to ignore the science and are failing to meet their environmental targets. The emergency was declared but radical action STILL hasn’t taken place.

Animal Rebellion demands the UK Government must take urgent action to save human and non-human animals and the planet. To tell the truth about the impact that animal agriculture has on our planet. To act now to address the climate emergency and transition to a plant based food system that is just and sustainable. To go beyond politics by holding a binding citizens assembly to decide how best to transform our food system, to put power back into the hands of our people and upgrade our democracy

Rebel with us this September!

This September, we need to go and disrupt where the decisions are made. The world can’t ignore the link between the animal emergency and the climate emergency any longer. The science is clear but those in power still refuse to act. That’s why, this time, we’re going straight to the top and bringing the animal and climate emergency to the halls of power.

Join us as we march from Smithfield Meat Market to the UK Parliament. From where Animal Rebellion started to where this destruction will end. Join us as we take to the streets to show our Government that we will not let their ignorance and greed destroy animals, people and our planet. We cannot let the UK Government ignore the animal emergency!

This march will only be the start. We are building up to something massive, with 10 full days of actions from the 1st of September to the 10th. Let’s show the UK Government that we’re not dead yet!

Hare coursing is one of the last bloodsports which is still legal in Ireland....

The European Citizens’ Initiative process is a fairly new innovation in the EU which...

In the twentieth century, at the end of the 1960s and in the 1970s,...
Previous articleA Return to Nature and the Cycle of Life: Green Burials in Perspective
Next articleWWF Living Planet Report sends an SOS for Nature as Scientists warn Wildlife is in Freefall