Look out for these vegan ads over the coming months on buses, trains, billboards and street signs around the UK!

A new worldwide advertising campaign educating people about animal rights and veganism was launched in the North East of England on the 27th of June this year. The campaign is being organised by Sandra Higgins of Eden Farmed Animal Sanctuary in Ireland, and is a continuation of the original campaign that began in Ireland last November.

The ads, many of which feature the residents of Eden Farmed Animal Sanctuary, feature slogans such as ‘Humane Milk is a Myth: Don’t Buy It’, ‘They Trust Us, We Betray Them’ and ‘Dairy Takes Babies from Their Mothers’. They are displayed on billboards, in Metro trains, on rail platforms, on bus shelters and street signs throughout the North East of England and in bathrooms across England. I have seen the ads myself first-hand while on my recent trip to Newcastle. Every Metro train carriage I travelled in had five or six of the ads displayed. The messages and photos are very powerful. Sandra has a special interest in Complex Post Traumatic Stress Disorder and Betrayal Trauma in her profession as a psychologist. She features a human hand in many of the ads – emphasising our role in the lives of the animals we use and our ultimate betrayal of them. 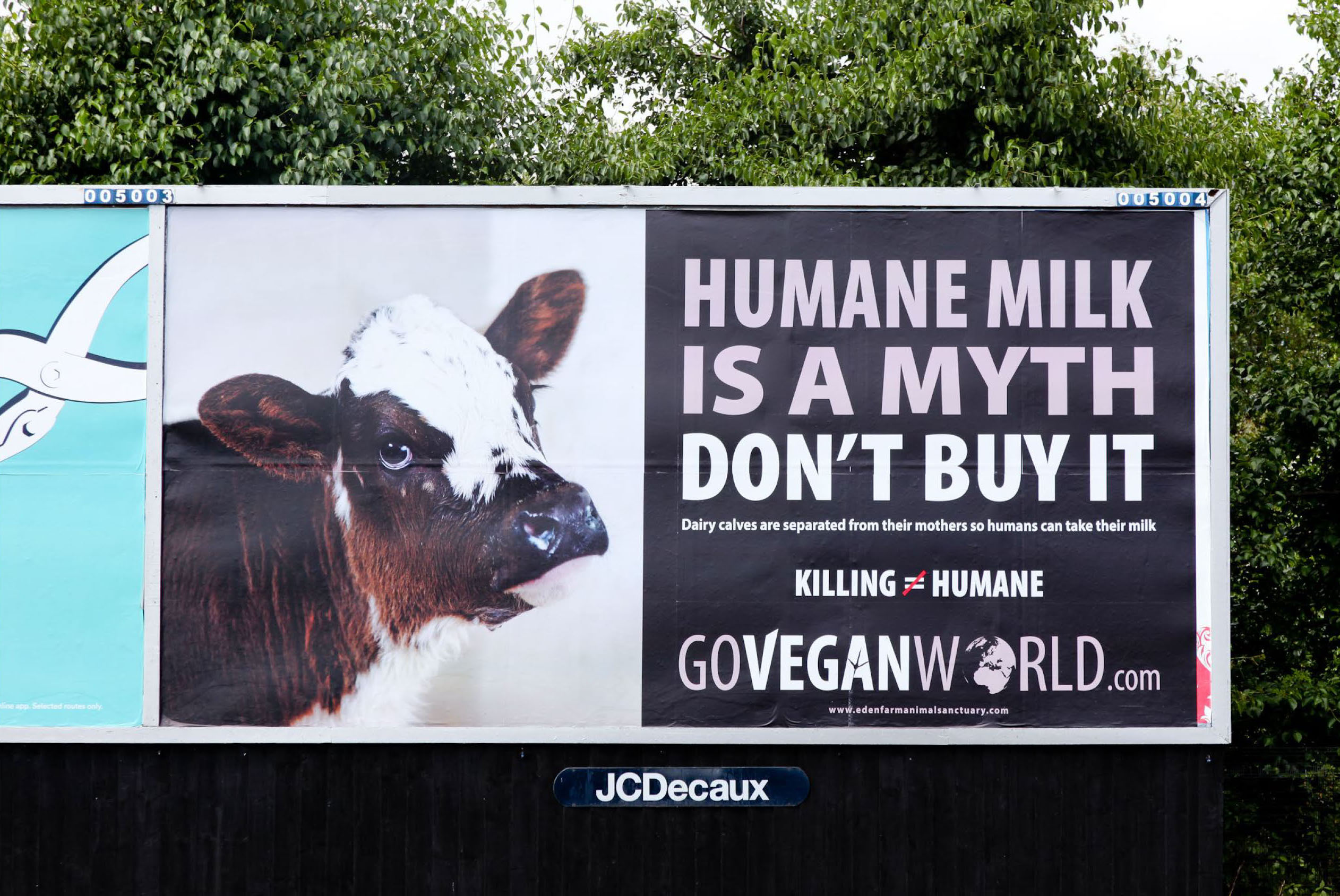 “The plan is to roll the campaign out throughout England, Scotland and Northern Ireland over the next six-to-twelve months”, says Sandra. “The campaign is supported by the Go Vegan World website and Vegan Guide, both of which are designed to give a clear understanding of what veganism is, why we need to be vegan, and how to be vegan. These campaign supports aim to help people transition easily and quickly to veganism, without the need for complication or gradual stages.”

Sandra gave some very interesting talks in Newcastle Upon Tyne to coincide with the launch of the campaign. In “Other Animals: Our Teachers”, she gave an intimate insight into how our use of other animals impacts on them individually. In “Veganism in an Age of Entitlement: Narcissism, Empathy and the Rights of Others”, she outlined her theory that explains speciesism within the framework of cultural narcissism and how she uses the therapeutic technique of empathic confrontation to counter myth with fact. 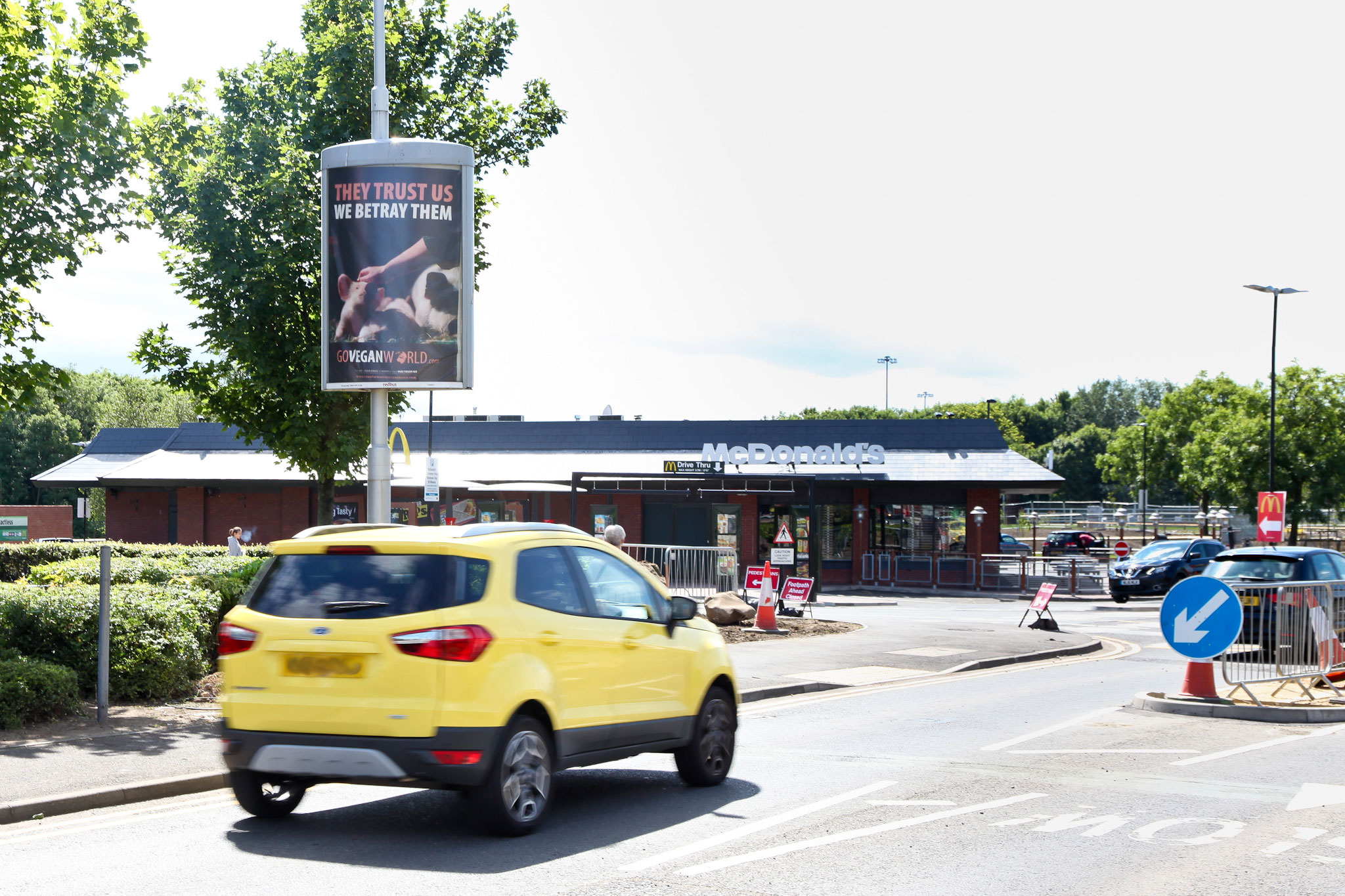 “Veganism concerns much more than what we do or do not consume, wear, and use”, says Sandra. “At its heart it is simply being fair to others. It is the beginning of our journey towards an equal relationship with other animals. I am convinced that in time we will come to see them for who they are: magnificent, courageous, exquisitely sensitive beings with a capacity for feeling that may well exceed our own. The aim of the campaign is to bring the issues of animal rights and veganism to those who are not aware. The campaign also confronts those who are already aware but are not vegan because few of us would harm the animals who feature in the posters or any one of the billions like them. We pay others to harm and kill on our behalf, taking refuge in an image of ourselves as decent, honourable, and humane which our behaviour contradicts.”

As part of the campaign Sandra will speak at a number of events in the coming months. Details are available on the Go Vegan World Facebook Page.