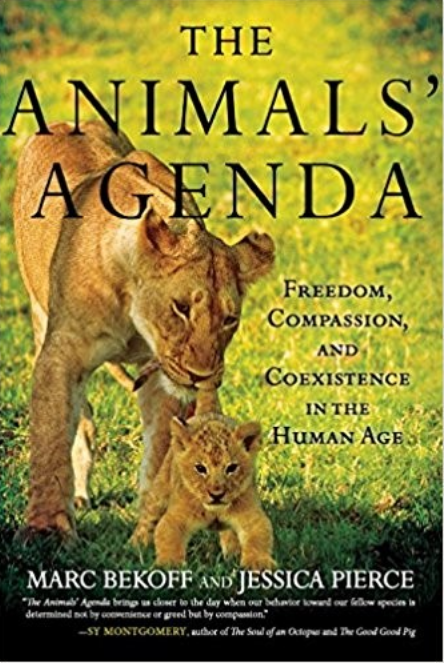 You have both written extensively on the topics of nonhuman animal welfare, ethics and science; The Animals’ Agenda is an excellent, and important addition to your collected works. Can you comment on what your inspiration/vision for writing this book was?

The book took root out of a shared sense of frustration with science—and with a particular kind of science. We had both assumed, earlier in our careers, that the scientific study of the emotional and cognitive lives of animals would lead to a sea change in how humans treat animals—how could it not? Once people see that animals are intelligent and feeling creatures, just like us, they won’t be able, in good conscience, to inflict suffering and deprivations.

It seemed, as we looked around, that the accumulating research into the inner lives of animals had done nothing to help their situation—more animals are being raised and slaughtered for food, more are being held captive in entertainment venues, invasive laboratory research is expanding, and so forth. We had a number of discussions where we puzzled over this seeming paradox: the more we know, the worse things are getting for animals.

The Animals’ Agenda was our attempt to figure out why science is failing animals. The answer, in brief, is that the study of animal emotion and cognition has been channeled into animal welfare science. And “welfare science” is not science in the service of animals, but rather science in the service of industry. Indeed, as we delved into our research for the book, it became pretty clear that the word “welfare” is a dirty little lie: whenever you see the word “welfare” in the literature, you can be pretty sure something unpleasant is being done to animals. (The word “humane” is equally troublesome.)

Good animal welfare just isn’t good enough for the billions of nonhuman animals who are used in a wide variety of human-controlled venues, ranging from so-called factory farms, to laboratories, zoos and circuses, to pets, to wild animals and conservation efforts both in captivity and in more natural settings.

Out of many long, spirited, and wide-ranging discussions, the organizing principle of Freedom emerged—as the antidote to “welfarism.” We revisited the original Five Freedoms that were developed in the 1960s and which form the cornerstone of animal welfare science.

Why do you say that good welfare will never be good enough?

Simply put, animal welfare is not much concerned with the plight of individual animals, and in numerous instances the welfarist approach patronizes animals. Business as usual for welfarists basically boils down to trumping the interests of animals in favor of humans, while trying to give animals a better life as they’re being ruthlessly exploited and abused and often killed in the venues mentioned above.

Among the classic examples is the work of Temple Grandin, on whom we focus on Chapter 3. Grandin is the iconic welfarist in that she tries to make the life of factory farmed animals “better” on their way to the killing floor of slaughterhouses. She feels comfortable calling the chute on which they stumble to their brutal death a “stairway to heaven,” when actually it is a stairway filled with horror until the cows are killed. She refuses to call an end to this practice while maintaining that she’s giving these animals a “better life” than they would have without having the stairway on which to trod as they hear, see, and smell other cows being massacred. Welfarism of this sort allows us to maintain the status quo, as if we’ve done our due diligence, morally speaking. Of course, a “better life” for these cows is not a good life.

So, the bottom line for welfarists is that they’re trying to make life marginally better for animals in the arenas in which animals are exploited, leaving unquestioned the human practices that cause tremendous animal suffering. Welfarism is a salve for our conscience.

What is the knowledge translation gap, and how you would recommend bridging it?

The knowledge translation gap refers to the practice of ignoring tons of science showing that other animals are sentient beings and going ahead and causing intentional harm in human-oriented arenas. On the broad scale, it means that what we now know about animal cognition and emotion has not yet been translated into an evolution in human attitudes and practices. A great example of the knowledge translation gap is found in the wording of the Federal Animal Welfare Act, which explicitly excludes rats and mice from kingdom Animalia (even though a first grader knows that rats and mice are animals). In post-election parlance, we could also call the AWA’s slip up an “alternative fact.” (For more on the idiocy of the AWA’s misclassification of rats, mice, and other animals please see “The Animal Welfare Act Claims Rats and Mice Are Not Animals.”)

The science of animal well-being focuses on individual animals and would not allow animals to be used and abused in the way that welfarism allows. Welfarism puts human needs first, and tries to accommodate animals within the “human needs first” framework. Well-being broadens the question of “what do animals want and need” beyond the welfare box, and tries to understand animal preferences from the animals’ point of view. For example, welfarism asks whether mink on a fur farm would prefer taller or shorter cages; well-being challenges the idea mink should be in battery cages on a fur farm in the first place, because they cannot have true well-being or “good lives” under such conditions—no matter how many welfare modifications we make.

Is the recently-formed partnership between SeaWorld and the Humane Society an example of what you call “Humane Washing”?

It is and it isn’t. While some of the changes at SeaWorld are better for the animals who are locked up there, they are not enough and we would like to see animal welfare societies be much more insistent on further changes. So, while it is a form of “humane washing,” it is not as egregious as it could be. (For more on humane-washing please see “Stairways to Heaven, Temples of Doom, and Humane-Washing.”)

What would you say it means for a cetacean to lose their liberty in an aquarium? Is providing “enrichment” enough to mitigate this loss?

No, enrichment is not enough, and it can’t be in conditions of captivity. Enrichment might provide a “better life,” but it cannot provide a “good life” for these and other magnificent beings who are forced to live in cages of different sizes and who lose freedoms “in the name of entertainment” which boils down to “in the name of humans” or “in the name of money.”

How can the concept of well-being affect animal advocacy, current uses of animals and our everyday interactions with nonhuman individuals?

This is a great question. Well-being means that each and every individual counts, and it may come down to stopping a research project or closing down a venue in which animals are routinely harmed and killed, or not beginning such a project in the first place. Well-being sets a considerably higher bar than welfarism, because human interests don’t simply get to trump what animals want and need.

A note on the cover: The description for the image above, given to us by Thomas D. Mangelsen, Images of Nature, reads: “On the open plain under a lone acacia tree, a small pride of lions – an older female with three younger members protect a precious eight-week-old cub. Each lioness takes on different roles depending on their age and abilities to help ensure the survival of the pride. The cub’s mother, the most powerful and experienced hunter, focuses her attention on the passing wildebeest migration while one of the “aunties” concentrates her energy on babysitting the very precocious and last remaining treasure of the pride.”

We chose our book cover carefully, seeing a young wild lion on the Masai Mara as a symbol of freedom. This cub seems, by his intent expression, to believe that the world is his oyster, and that he’ll be able to do anything that he wants. But his babysitter already seems to be telling him that although he’s wild, he’s not necessarily free.

Bioethicist Jessica Pierce, Ph.D., is the author of the book The Last Walk: Reflections on Our Pets at the Ends of Their Lives (University of Chicago, 2012). Some of the questions she explores are: Do animals have death awareness? Why is euthanasia almost always considered the compassionate end point for our animals, but not for our human companions? Is there ever a good reason to euthanize a healthy dog? Why do people often grieve more deeply for their pets than they do for people? What is animal hospice? Her other books include Wild Justice: The Moral Lives of Animals (written with Marc), Morality Play, Contemporary Bioethics: A Reader with Cases and The Ethics of Environmentally Responsible Health Care. Visit Jessica’s website for more details: www.jessicapierce.net.

Marc Bekoff’s latest books are Jasper’s Story: Saving Moon Bears (with Jill Robinson); Ignoring Nature No More: The Case for Compassionate Conservation; Why Dogs Hump and Bees Get Depressed: The Fascinating Science of Animal Intelligence, Emotions, Friendship, and Conservation; Rewilding Our Hearts: Building Pathways of Compassion and Coexistence; and The Jane Effect: Celebrating Jane Goodall (edited with Dale Peterson). The Animals’ Agenda: Freedom, Compassion, and Coexistence in the Human Age (with Jessica Pierce) will be published in April 2017 and Canine Confidential: An Insider’s Guide to the Best Lives For Dogs and Us will be published in early 2018. His homepage is marcbekoff.com.

If someone were to ask you what veganism is like for communities across the...

The Ghosts in Our Machine is one of the most striking films I have...
Previous articleThe Protein Myth
Next articleMoving to a Vegan Australia – Part 3