The main solution being promoted by both governments and environmental organisations is to transition from fossil fuels to a low carbon energy system.  This will not be easy and will use lot of resources as outlined in the free on line book, Sustainable Energy Without the Hot Air.  A large number of other direct and indirect solutions to climate change are presented in detail in the excellent book and website, Drawdown. This lists food waste, the transition to a plant based diet and reforestation as the third, fourth and fith most important solutions.  They highlight the importance of the food and land use sectors for reversing climate change below. 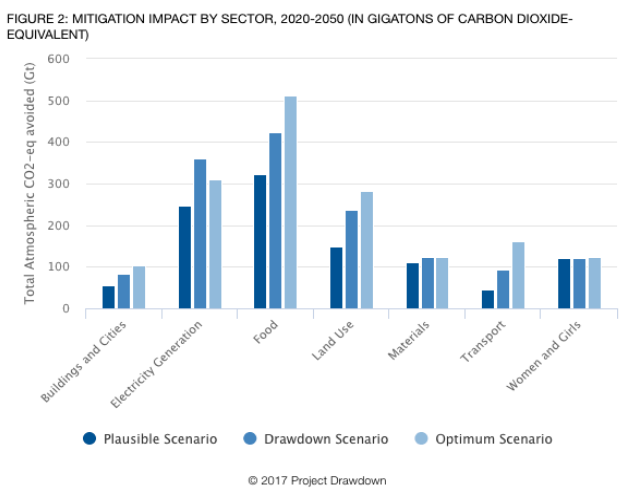 Combined together they become the single most important viable solution available.

Renewable Energy, Costs and Progress by 2016

There are a number of initiatives that are proposed in order to transition from fossil fuels.  Some energy sources labelled as renewable energy have little climate mitigation benefits and some solutions like biomass and biofuels produce greater emissions than fossil fuels;  Some of the proposed transition solutions include the following;

Although there is a lot of news about the growth in the renewable energy market it is still just 3% of global energy consumption as shown below though it can account for up to 50% of new energy investments in some countries. 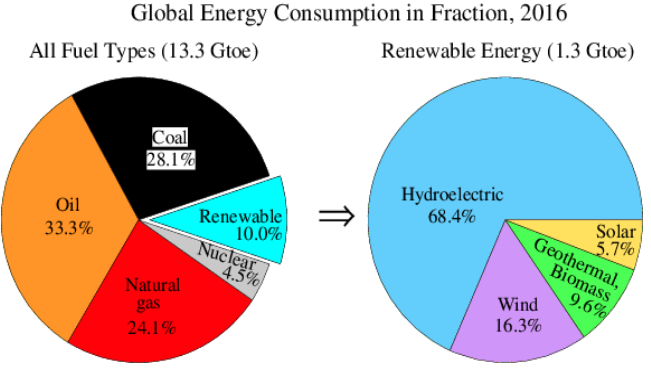 A new study from the International Energy Agency, The World Energy Investment Outlook is a full and comprehensive update of the energy investment picture to 2035 – the first full update since 2003. It states that $53 trillion in cumulative investment in energy supply and in energy efficiency is required to 2035 to get the world onto a 2°C emissions path. Investment of $14 trillion in efficiency helps to lower energy consumption by almost 15% in 2035.“ Currently Global energy use is continuing to increase as can be seen in the below diagram which just shows a contraction in the use of coal. 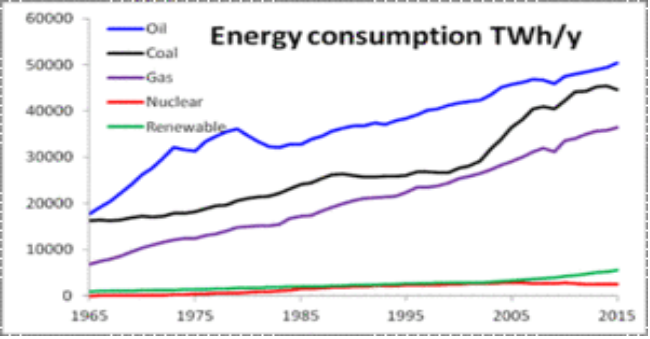 Why Biomass and Biofuels are not a solution to Climate Change

Recently a group of senior scientists criticised an EU directive to double Europe’s current renewable energy by 2030 because it proposes to allow the cutting down and burning of trees to be considered as renewable energy. European wood producers already generate electricity and heat as beneficial by-products, using wood wastes and limited forest residues. Most of this material would decompose releasing CO2 in a few years anyway, so using them to displace fossil fuels can reduce CO2 emissions. Cutting down trees simply to burn them for energy has fundamentally different consequences because the CO2 released into the air would otherwise stay locked up in forests. Typically, around one third or more of each tree is contained in roots and small branches that are left in the forest to protect soils, and most of which decompose, emitting CO2. Compressed pellets increases efficiency but uses energy and creates additional emissions. A power plant burning wood chips will typically emit one and a half times the CO2 of a plant burning coal and at least three times the CO2 emitted by natural gas.

For more than a decade, the increased use of biomass has been supplying roughly half of Europe’s increase in renewable energy. To supply even one third of the additional renewable energy required by 2030, Europe would more than double its current harvest. This would turn a likely 6% decrease in energy emissions by 2050 through solar and wind into at least a 6% increase. To supply just an additional 3% of global energy with wood, the world needs to double its commercial wood harvests at great costs to climate and wildlife. The scientists conservatively estimated that using deliberately harvested wood instead of fossil fuels will release at least twice as much CO2 to the air by 2050 per kilowatt hour. Doing so turns a potential reduction in emissions from solar or wind into a large increase. The solution is to restrict eligible forest biomass to its traditional sources of residues and waste. Previous EU directives to increase the use of Biofuels triggered a wave of deforestion of tropical forests for palm oil plantations which ended up generating more GHG emissions than diesel or petrol. It’s clear that using biomass or biofuels to replace fossil fuels is not in any way a solution. They produce more GHG emissions than fossil fuels while continuing to destroy forests and wildlife.

Veganism – A Social and Cultural Transformation

Currently we are feeding 8,700 Mt of feed to farm animals producing just 310 Mt of meat (2016), 789 Mt of milk (2014) and 70 Mt of eggs (2014). If we just consider the calories lost from grain and soya beans, animal agriculture converts enough healthy food for 7.5 billion people into enough unhealthy food for 1.5 billion people by first feeding it to animals. Despite this while consumption of animal products is declining in some western countries it is increasing globally due to increases in developing countries (as shown below).

“Twenty-five years ago, the Union of Concerned Scientists and more than 1700 independent scientists, including the majority of living Nobel laureates in the sciences, penned the 1992 “World Scientists’ Warning to Humanity”. These concerned scientists called on humankind to curtail environmental destruction and warned that “a great change in our stewardship of the Earth and the life on it is required, if vast human misery is to be avoided.” In their manifesto, they showed that humans were on a collision course with the natural world. 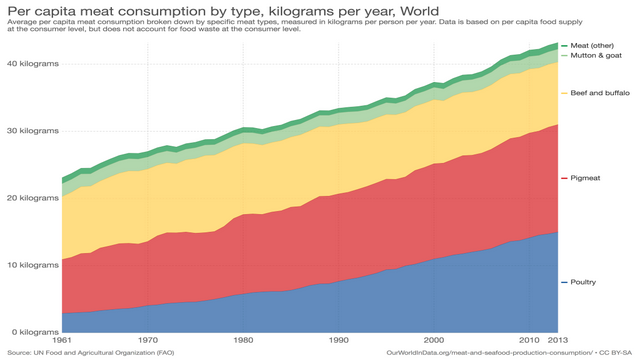 They expressed concern about ozone depletion, freshwater availability, marine life depletion, ocean dead zones, forest loss, biodiversity destruction, climate change, and continued human population growth.”  The principle driver for all of these except ozone depletion and human population is animal agriculture. In 2017 World Scientists issued their 2nd Warning to Humanity (pdf) this time co-signed by over 15,000 of the world’s scientists. They concluded that since 1992 most of these problems (except ozone) have continued to rapidly deteriorate.  They outlined the following steps not in order of importance or urgency to avoid the consequences our present course would bring:

But in order to move to a sustainable society another list of goals based on scientific analysis is insufficient. What is needed is social and cultural transformation. At the UN Climate Summit, COP-17, in Durban, South Africa, in 2011, a group of 40 interfaith leaders made a pledge to Ms. Christiana Figueres, the Executive Secretary of UNFCCC. The pledge read, in part, “While Climate Change is a symptom, the fever that our Earth has contracted, the underlying disease is the disconnection from nature that plagues human societies throughout our Earth. We, the undersigned, pledge to heal this disconnection by promoting and exemplifying compassion for all living beings in all our actions.”

But personal transformation alone is insufficient for the social and cultural transformation that we desperately seek. For that, we need to take inspiration from one of the greatest social transformers of all time, Mahatma Gandhi as described here below by Sailesh Rao.

“A century ago, in 1915,  Mahatma Gandhi landed in India to jump start the Indian Independence movement. Gandhi understood that effective social transformation can occur only when large numbers of people undergo personal transformation together, with discipline and persistence. The Khadi movement that Gandhi initiated in the early 20th century required each participant to wear only simple homespun Khadi clothes. But it created a personal and social transformation powerful enough to bring the mighty British empire to the negotiating table within just a dozen years of its initiation. What Gandhi asked the Indian people to do was sheer genius, because, it was simple, substantial, spiritually uplifting.

It was simple – anyone could join the Khadi movement by simply changing their daily clothes. It was substantial because it was affirmed daily and it impacted the largest industry in England at that time, the textile industry. Within a dozen years of its initiation, the Khadi movement had bankrupted the textile mills of Manchester and brought the mighty British Empire to its knees. It was spiritually uplifting for the people of India because it healed their divisions as they united around a common cause that was larger than themselves. And it was also spiritually uplifting for the people of Great Britain for it began relieving them of their colonial pretensions. One hundred years later, we are faced with a greater challenge in climate change and this time, it is not about changing our clothes, but changing what we eat: we need to stop consuming animal products of any kind.

Veganism is simple to do – just stop eating fish, meat, eggs and dairy or wearing fur and leather. It is substantial because it is affirmed daily and it impacts the most destructive industry with the largest footprint on Earth today. It is substantial because recovering forests can sequester 265 GtC if everyone goes vegan, which is more carbon than the 240 GtC that humans have added to the atmosphere in the entire industrial era! Finally, it is spiritually uplifting as it unites the whole world in a concerted act towards a common cause that is larger than ourselves.

Veganism, or more broadly, Ahimsa, the path of nonviolence, is one of the most powerful personal responses to climate change. Veganism is a lifestyle where we seek “to exclude as far as is possible or practical, all forms of exploitation and cruelty to animals for food, clothing or any purpose whatsoever.” Ahimsa, a concept that was introduced in the Vedas a few millennia ago, extends such consideration to all beings, not just animals. However, in the final analysis, Veganism and Ahimsa turn out to be equivalent. Therefore, five years ago, the UN Environment Program’s international panel on sustainable resource management had concluded that, “a global shift towards a vegan diet is vital to save the world from hunger, fuel poverty and the worst impacts of climate change.”

The UN IPCC AR5 WG3 report states that livestock systems are occupying nearly 45% of the land area of the planet, while providing less than 20% of the calorific intake for human consumption. When the whole world goes vegan, as it inevitably must, most of this precious land resource can be reverted back to native ecosystems to sequester carbon and begin healing the Earth’s climate. And it can happen quickly! A team of researchers at Oxford showed that dietary changes would have huge economic benefits, leading to savings of US$700-1,000 billion per year globally in healthcare, unpaid informal care and lost working days. The value that society places on the reduced risk of dying could even be as high as 9-13% of global GDP, or US$20-$30 trillion. Avoided climate change damages from reduced food-related greenhouse gas emissions could be as much as US$570 billion.  Food-related greenhouse gas emissions would also be cut by more than two thirds.

Just as our early 20th century Indian ancestors changed what they wore to cast off the worst effects of colonialism within a dozen years, people the world over can change what we consume in the early 21st century to cast off the worst effects of climate change quickly. And just as the Khadi movement of the 20th century led to the end of British colonialism in India, the Vegan – Ahimsan movement of the 21st century will lead to a civilizational transformation of our global human family. Imagine living in a world where all animals, birds and fishes are routinely treated as if they were our cousins. Because they are. Let’s not continue imagining our current world where animals are routinely enslaved, tortured and exploited by the billions each day.

Imagine a world in which the forests are thriving and every year we measure how much land is being afforested, not deforested! Let’s not continue imagining our current world where we pat ourselves on the back when we destroy a little less forests this year than what we destroyed last year.  So what are we waiting for? “ (by Sailesh Rao)