Sailesh Rao of Climate Healers imagines a different future where our mission is to heal the Earth’s climate and to accomplish that, we ask ground-breaking questions such as: 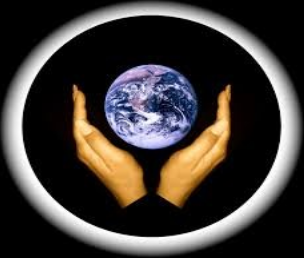 Imagine going to a doctor with a persistent, mild fever. The doctor examines you and says that you have cancer and that your fever is going to get worse! That the best he can do is to stabilize your fever at a high level while the cancer rages on. Or in the worst case, the fever would be terminal. Later, you discover that the doctor was not entirely truthful to you. That he omitted to tell you that if you change your lifestyle, stop smoking cigarettes and start eating healthily, the cancer would be reversed and the fever would subside. But he never gave you that option because he simply assumed that you were too much of an addict and could never give up smoking. In the best case, he was assuming that you would be smoking half a pack of cigarettes a day while in the worst case, he was assuming that you would be smoking 2 packs of cigarettes a day. How would you feel?

Why would we wish such suffering upon the rest of the world? And who, except for the truly rabid among the corporate sector, sees these as desirable traits?

At Climate Healers, we imagine differently. Our mission is to heal the Earth’s climate and to accomplish that, we ask ground-breaking questions such as:

And we partner with NGOs and educational institutions to answer these questions and implement the answers in real world settings. After all, it is clear from the breakdown of the weight of land mammals on Earth that the livestock sector is a huge albatross around our necks today. The biomass of humans today, is already 1.8 times the biomass of wild megafauna that was sustained in native ecosystems for millions of years prior to human ascendance. Therefore, why would we continue supporting livestock megafauna whose biomass is additionally triple that of humans? 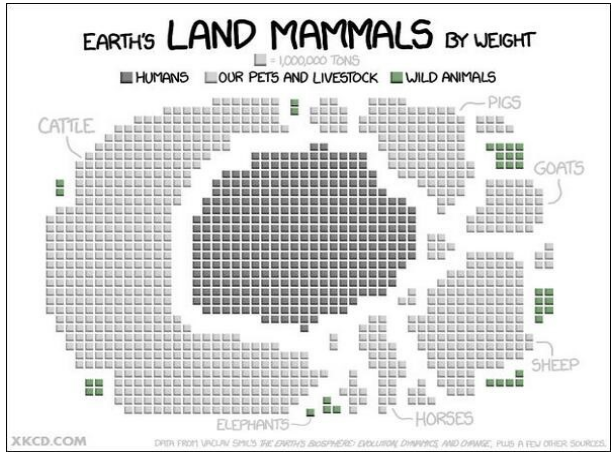 As such, the sustainable and manageable level of livestock production on planet Earth today is precisely ZERO as the UNEP has already admitted. Therefore, why not assume that this has happened and ask what would happen to the Earth’s climate when we make that transformation towards sustainability?

And to do so, it turns out that we merely need to keep in mind three simple principles that we can learn from our children, e.g., from the Walt Disney movie, Cinderella:

Courage and loving kindness or Compassion is at the heart of all the faith traditions of the world. At the UN Climate Summit, COP-17, in Durban, South Africa, in 2011, a group of 40 interfaith leaders made a pledge to Ms. Christiana Figueres, the Executive Secretary of UNFCCC. The pledge read, in part,

“While Climate Change is a symptom, the fever that our Earth has contracted, the underlying disease is the disconnection from creation that plagues human societies throughout our Earth. We, the undersigned, pledge to heal this disconnection by promoting and exemplifying compassion for all creation in all our actions.” 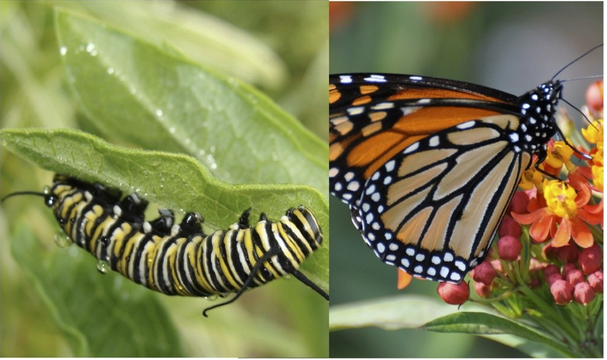 A century ago, in 1915,  Mahatma Gandhi landed in India to jump start the Indian Independence movement. Gandhi understood that effective social transformation can occur only when large numbers of people undergo personal transformation together, with discipline and persistence. The Khadi movement that Gandhi initiated in the early 20th century required each participant to wear only simple homespun Khadi clothes. But it created a personal and social transformation powerful enough to bring the mighty British empire to the negotiating table within just a dozen years of its initiation.

What Gandhi asked the Indian people to do was sheer genius, because;

It was simple – anyone could join the Khadi movement by simply changing their daily clothes.

It was substantial because it was affirmed daily and it impacted the largest industry in England at that time, the textile industry. Within a dozen years of its initiation, the Khadi movement had bankrupted the textile mills of Manchester and brought the mighty British Empire to its knees.

It was spiritually uplifting for the people of India because it healed their divisions as they united around a common cause that was larger than themselves. And it was also spiritually uplifting for the people of Great Britain for it began relieving them of their colonial pretensions. As Jean-Jacques Rousseau said, “Man is born free and everywhere he’s in chains. He who is a master of others is more a slave than they!” Therefore, our British ancestors were probably more enslaved than our Indian ancestors of that era.

One hundred years later, we are faced with a greater challenge in climate change and this time, it is not about changing our clothes, but changing what we eat: we need to stop consuming animal products of any kind.

It is simple to do – just stop eating fish, meat, eggs and dairy or wearing fur and leather.

It is substantial because it is affirmed daily and it impacts the most destructive industry with the largest footprint on Earth today. In fact, Prof. Atul Jain and his graduate student, Shiije Shu, who are land carbon experts with the IPCC at the University of Illinois, have used their ISAM model to estimate that recovering forests can sequester 265 GtC if everyone goes vegan, which is more carbon than the 240 GtC that humans have added to the atmosphere in the entire industrial era!

Finally, it is spiritually uplifting as it unites the whole world in a concerted act towards a common cause that is larger than ourselves.

As Pope Francis laid out in Laudato Si, “It is contrary to human dignity to cause animals to suffer or die needlessly!” And the scientific experts at the American Dietetic Association have said that it is absolutely unnecessary to eat animal foods of any kind at any stage of our life-cycle. Therefore, how can we, in good conscience, continue to consume their flesh or secretions?

Veganism, or more broadly, Ahimsa, the path of nonviolence, is one of the most powerful personal responses to climate change. Veganism is a lifestyle where we seek “to exclude all forms of exploitation and cruelty to animals for food, clothing or any purpose whatsoever.” Ahimsa, a concept that was introduced in the Vedas a few millennia ago, extends such consideration to all beings, not just animals. However, in the final analysis, Veganism and Ahimsa turn out to be equivalent. While Ahimsa or compassion for all creation is infinitely sustainable, sustained violence to any part of creation is fundamentally unsustainable. Such violence will stop either when that part of creation is destroyed or we are destroyed. Therefore, five years ago, the UN Environment Program’s international panel on sustainable resource management concluded that, “a global shift towards a vegan diet is vital to save the world from hunger, fuel poverty and the worst impacts of climate change.”

Our current livestock production systems are unsustainable since the global biomass of livestock mega fauna today is more then FIVE times the biomass of all wild mega fauna that existed for millennia in native ecosystems prior to human ascendance.

To make matters worse, the biomass of human beings today is already nearly twice the biomass of all wild mega fauna that existed for millennia in native ecosystems. Therefore, it is inconceivable that human land use systems can beat Nature at her pristine best by a factor of 7, except on an unsustainable, short-term basis.  The UN IPCC AR5 WG3 report states that livestock systems are occupying nearly 45% of the land area of the planet, while providing less than 20% of the calorific intake for human consumption. 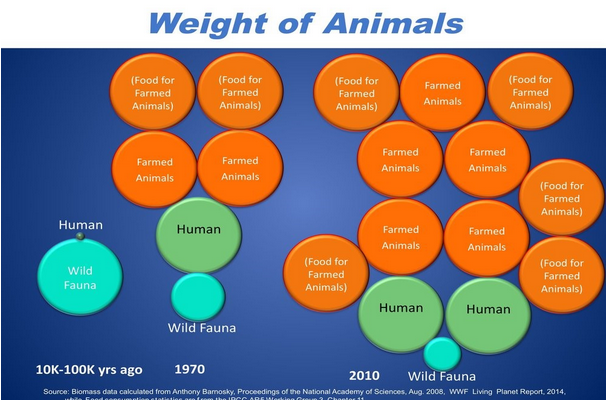 When the whole world goes vegan, as it inevitably must, most of this precious land resource can be reverted back to native ecosystems to sequester carbon and begin healing the Earth’s climate. And it can happen quickly!

Just as our early 20th century Indian ancestors changed what they wore to cast off the worst effects of colonialism within a dozen years, people the world over can change what we consume in the early 21st century to cast off the worst effects of climate change quickly. And just as the Khadi movement of the 20th century led to the end of British colonialism in India, the Ahimsa movement of the 21st century will lead to a civilizational transformation of our global human family.

Imagine living in a world where all animals, birds and fishes are routinely treated as if they were our cousins. Because they are. Let’s not continue imagining our current world where animals are routinely enslaved, tortured and exploited by the billions each day.

Imagine a world in which the forests are thriving and every year we measure how much land is being afforested, not deforested! Let’s not continue imagining our current world where we pat ourselves on the back when we destroy a little less forests this year than what we destroyed last year.

So what are we waiting for?

Dr. Sailesh Rao is an electrical engineer and was a key developer of Gigabit Ethernet. Drawn by the climate crisis to form Climate Healers in Phoenix, Arizona, he seeks to revolutionize biomass consumption in the southern hemisphere. He has been a member of Al Gore’s Climate Reality Leadership Corps and was an executive producer of Cowspiracy: The Sustainability Secret. He is the author of two books on the compassionate solution to climate change called Carbon Dharma and Carbon Yoga.  You can watch a number of his talks on the Climate Vegan youtube channel here (which we highly recommend) or listen to a fascinating interview by Rich Roll here.