Diet and Climate Change: Cooking up a Storm

How can we eat to combat disease and greenhouse gas emissions at the same time?

By Dr. Michael Greger at nutritionfacts.org

One of the most prestigious medical journals in the world commented that climate change represents the biggest global health threat of the 21st century, and currently, chronic diseases are, by far, the leading cause of death. Might there be a way to combat both at the same time? For example, riding our bikes instead of driving is a win-win-win for people, planet, and pocketbook. Good for us, the environment, and cheaper too. Are there similar win-win situations when it comes to diet?

The same foods that create the most greenhouse gases appear to be the same foods that are contributing to many of our chronic diseases. Meat, fish, eggs, and dairy were found to have the greatest environmental impact, whereas grains, beans, fruits and vegetables had the least impact. And, not only did the foods with the heaviest environmental impact tend to have lower nutritional quality, but also a higher price per pound, thereby scoring that win-win-win scenario.

The European Commission, the governing body of the European Union, commissioned a study on what individuals can do to help the climate. In terms of transport, if Europeans started driving electric cars, it could prevent as much as 174 million tons of carbon from getting released. We could also turn down the thermostat a bit, maybe put on a sweater. But, the most powerful thing people can do is shift to a meat-free diet. What we eat may have more of an impact on global warming than what we drive. Even just cutting out animal protein intake one day of the week could have a powerful effect. Even just Meatless Mondays could beat out working from home all week and not commuting. 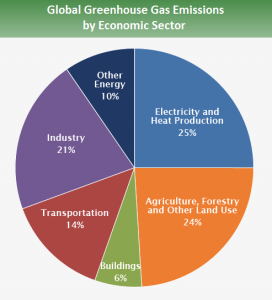 And, a strictly plant-based diet may be better still, responsible for only about half the greenhouse gas emissions. Overall, studies have suggested that moderate dietary changes are not enough to reduce impacts from food consumption drastically. Changes to healthier diets, without significant meat and dairy intake reductions, may result only in rather minor reductions of environmental impacts. This is because the average fossil energy input for animal protein production systems is approx. 25 calories of fossil energy input for every one calorie produced—more than 11 times greater than that for grain protein production, for example, which is down around two to one.

Researchers in Italy compared seven different diets to see which one was the environmentally friendliest. They compared a conventional, omnivorous diet adhering to dietary guidelines, to an organic, omnivorous diet, conventional vegetarian, organic vegetarian, conventional vegan, and organic vegan to what the average person actually eats. For each dietary pattern, they looked at carcinogens, air pollution, climate change, effects on the ozone layer, the ecosystem, acid rain, and land, mineral, and fossil fuel use. This is what they came up with. This is how many resources it took to feed people on their current diets. These are the negative effects the diet is having on the ecosystem, and the adverse effects on human health. If they were eating a healthier diet, conforming to the dietary recommendations, the environmental impact would be significantly less. An organic omnivorous diet would be better, similar to a vegetarian diet of conventional foods, beaten out by an organic vegetarian diet, conventional vegan and organic vegan diet.

But many aren’t aware of the cow in the room. It seems that very few people are aware that the livestock sector is one of the largest contributors to greenhouse gas emissions. But that’s changing.

The UK’s National Health Service is taking a leading role in reducing carbon emissions. Patients, visitors, and staff can look forward to healthy low carbon menus with much less meat, dairy, and eggs, for evidence shows that as far as the climate is concerned, meat is heat.

The Swedish Government recently amended their dietary recommendations to encourage citizens to eat less meat. Even if we seek only to achieve the conservative objective of avoiding further long-term increases in greenhouse gas emissions from livestock, we are still led to rather radical recommendations such as cutting current consumption levels in half in affluent countries—an unlikely outcome if there were no direct rewards to citizens for doing so. Fortunately, there are such rewards: important health benefits. By helping the planet we can help ourselves. 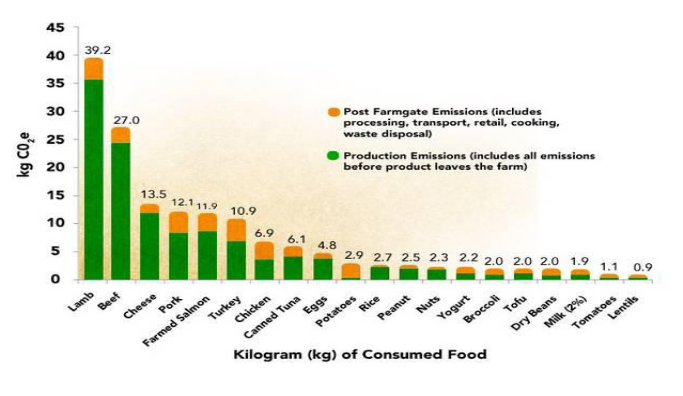