As we are well aware, human activity has been detrimental to the earth’s ecosystems and biodiversity.  Agriculture, and animal agriculture in particular, is the cause of deforestation (both locally and in areas such as the Amazon) and it is also the primary cause of species loss.  60% of wild animal populations have been lost in the past 40 years.  In addition, farming contributes to CO2 buildup in the atmosphere leading to climate change.  It also results in soil degradation, and water and air pollution.

In 1986 the EU introduced the first agri-environment scheme which was carried out in the UK.  Agri-environment schemes now operate throughout the EU.  These are schemes which pay farmers to carry out ecosystem services and biodiversity renewal on their land.  Examples include afforestation grants, restoration of bogs and wetlands, carbon sequestration and measures to increase the population of pollinators.  (A full list and description of ecosystem services can be found below).

EU agri-environmental legislation provides that every Member State may enact its own regulations specifying standards and environmentally sensitive areas.  Thus Member States have substantial scope for adapting basic principles and implementing them in their own way. 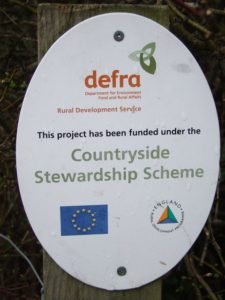 ‘Glastir’ is a sustainable land management scheme in Wales launched in 2012.  Its goals include “combating climate change, improving water management and maintaining and enhancing biodiversity.”  It aims to deliver measurable outcomes at both a farm and landscape level in a cost effective way.

All these schemes allow farmers to continue to raise animals on their land.  In our recent publication ‘Transition to an Irish Vegan Agricultural System’ we recommended that subsidies should ideally only be granted to farmers who divest from animal farming and transition to ecosystems services and plant-based farming.

The following is a list of examples of Ecosystems Services, followed by a brief explanation of each: 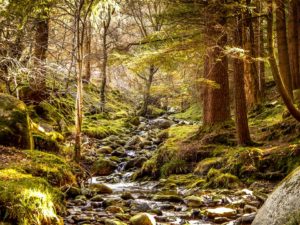 Much of the world’s native forests were originally cut down in order to create pasture for grazing animals.  Today the average forest cover in the EU is 34%.  In the UK it is 13%, in Ireland 11%, Australia 17% and in the US it is 33%.

Forests are powerful carbon dioxide sinks.  Cutting down forests simply adds to the buildup of CO2 in the atmosphere.  Most countries now have afforestation projects which incentivise farmers to plant trees on their land.

This is the practice of renewing and restoring degraded, damaged, or destroyed ecosystems and habitats.  Restored habitats help to increase the populations of wild species which are currently in major decline such as birds, bees, butterflies, aquatic species and wild animals.

Bogs are of high importance for biodiversity and have distinctive assemblages of animal, fungal and plant species.  The peat in bogs is an important place for the storage of carbon.  If the peat decays, carbon dioxide would be released to the atmosphere, contributing to global warming. Undisturbed, bogs function as a carbon sink.

Wetlands are areas where water covers the soil, or is present either at or near the surface of the soil all year or for varying periods of time during the year, including during the growing season.  Water saturation largely determines how the soil develops and the types of plant and animal communities living in and on the soil.  Wetlands may support both aquatic and terrestrial species.  The prolonged presence of water also creates conditions that favour the growth of specially adapted plants.

Native grasslands are areas where the vegetation is dominated by grasses.  Sedge, rush, clover, herbs and native wildflowers also thrive in grasslands.

Soil, forests, peat bogs and wetlands all play a part in carbon sequestration.  Soils hold four times the amount of carbon stored in the atmosphere.  About half of this is found deep within soils.  Globally, soils are estimated to contain approximately 1,500 gigatons of organic carbon to 1m depth, more than the amount in vegetation and the atmosphere.  The total carbon reservoir in Irish forestry exceeds 1 billion tonnes, most of which is in the soil. 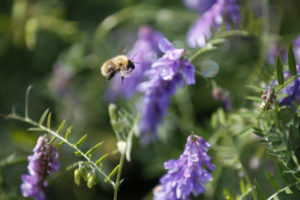 In the days prior to mechanisation and intensification farming was very pollinator friendly because it was rich in flowering plants, hay meadows and annual flowers in cereal crops.  There were more wildflowers along lanes and in field corners due to less spraying.  There were more flowers in hedgerows due to less mechanisation, and countries grew more of their own fruits and vegetables.  In the past 50 years, advances in farming have reduced the amount of flowers and the result is that we now have fewer bees.

Actions that can be taken to encourage pollinators include:

Drinking water can become contaminated as the result of runoff from agricultural land.  This runoff may include slurry, antibiotics, pesticides, fertilisers and other chemicals.  Slurry is a source of E.coli contamination which can be fatal.

Excessive quantities of Nitrogen and Phosphorous (contained in fertilisers) can reach the water causing eutrophication (ie. the overabundant growth of green plant material in water).

It is important that farmers switch to organic farming methods which avoid the use of both chemicals and artificial fertilisers.  By divesting from animal farming the problem of slurry and antibiotic contamination is eliminated.

Measures that can be taken to help mitigate or prevent flooding include :

Soil is a living ecosystem, essential for human and environmental health.  Soil is a biological engine where micro-organisms play a fundamental role in the decomposition of organic matter into nutrients available for plants, animals and humans.  Together with larger organisms, such as earthworms, these micro-organisms contribute to the structure of the soil making it more permeable to water and gases which is very important in recharging surface and ground water resources and preventing flooding.  Besides providing a habitat for below-ground biodiversity, soil is essential for the survival of most above-ground species.  Chemical pollution by fertilizers, pesticides, and antibiotics can destabilize the population dynamics of soil organisms, by affecting their reproduction, growth and survival. 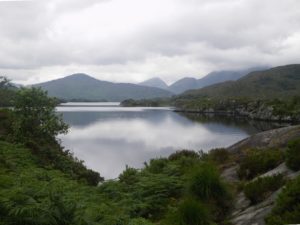 Food production is another service provided by the ecosystem.  Modern methods of growing food crops involve mono-cropping and the use of pesticides, fertilizers and heavy machinery – all of which have detrimental effects.  Ideally, food production should be organic, thereby eliminating the use of chemicals.

Vegan organic food production methods have demonstrated huge yields when compared to traditional methods.  In 2018 The Humane Party in the US produced a report comparing the productivity of a small-scale vegan-organic farm to conventional and organic agriculture outputs.  Their findings were as follows: