The fishing industry is the leading cause of species and ecosystem destruction in the world's oceans, killing trillions of marine animals directly and as by catch.  Over the last year a substantial number of research papers have come out shining a light on this clandestine industry which is completely unregulated in the open ocean, and when operating within the National Exclusive Economic Zones it is recklessly (legally) destructive. 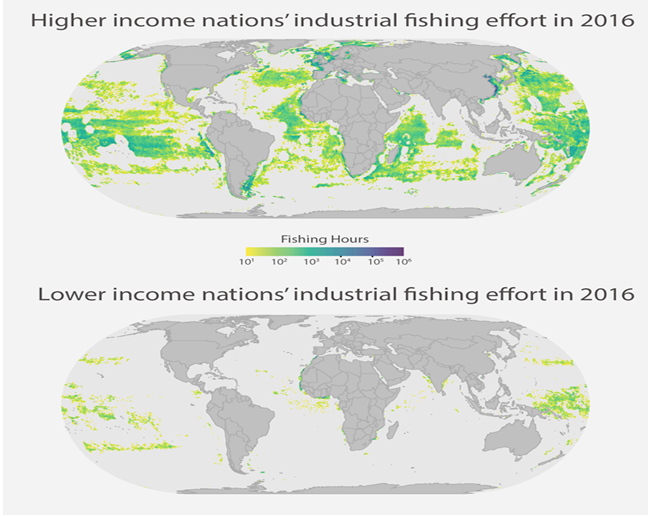 FAO State of the World’s Fisheries

In July 2018 the FAO released its biannual report on the State of the World’s Fisheries.  The report noted that:

When estimates for illegal fishing are included then research has shown that wild fish stocks are declining faster than FAO data suggest and half the world’s oceans are now industrially fished as can be seen in the below map of Global Fishing Activity.  Two thirds of fish species are overexploited in the Mediterranean and Black Seas and the Southeast Pacific.

The FAO estimates that 93% of the world’s fish are either fished at the so called ‘maximum sustainable level’ (60%) or are overfished (33%).  But when countries have fished at this so called ‘maximum sustainable level’ it has led to fish populations collapsing.  It has also caused the elimination of 70% of the populations of marine bird species around the world.  Perhaps they just mean ‘maximum sustainable profits’.  Despite this, the FAO estimates that almost 20% more fish will be eaten by 2030 and many countries are unfolding their Blue Growth Plans which are in fact detailed expensive Blue Destruction Plans.

Despite the obvious signs that ocean ecosystems are being decimated the UN agencies continue to ignore how fishing is disrupting the ocean’s biodiversity and the climate which depends on the health of the ocean ecosystems.  Knowing that all the ocean species are sentient and intelligent and deserving of our care and compassion it’s the easiest step in the world to go vegan.  This could result in the entire ocean becoming an astonishing marine sanctuary.  As consumers in the wealthy countries go vegan this will have a big impact on the fishing fleets of these countries which are by far the most destructive.

During April, people across the world celebrated the Christian holiday of Easter. For many,...

Two recent global studies give a clear indication how the fishing industry is massively...
Previous article6 Foods that help with Autoimmune Disease
Next articleWhat is the most important step – Go Solar or Go Vegan?