In The Blue Zones Solution author Dan Buettner outlines how cultural evolution in five different regions (he called Blue Zones) had developed societies that supported exceptional health and well-being. He describes how North Karelia in Finland managed to manufacture a healthy culture and give a remarkable ten year boost to people’s life expectancy. Inspired by their success, Buettner set up a grass roots programme to improve the health of the people in a rural agricultural town, Albert Lea, in Iowa, and then in three suburbs in Los Angeles.  He the moved on to a three year programme in the State of Iowa.

After just ten months, participants in Albert Lea had achieved an average increase in life expectancy of 3.1 years and had lost an average of 2.8 pounds; work sites became tobacco free; absenteeism was down by 20%; and new bike paths were planned. In three suburbs of Los Angeles at the end of three years communities reported a 14% drop in obesity, a 30% drop in smoking, a 10% increase in people exercising, and the incidence of both diabetes and high blood pressure was down. In addition City councils approved a plan to increase bike lanes by 300%.

Buettner’s programme also showed encouraging results in the state of Iowa.  After two years the state had jumped from nineteenth to tenth place in the Nationwide Well-Being rankings; the number of non-smokers had increased by 8.8%; and produce consumption had increased by 10.5%.

More than 75% of the deaths in Ireland and most developed countries are caused by chronic diseases that can be prevented by healthy lifestyles supported by healthy cultures. Instead we are spending billions on a health care system (or rather a disease management system) that is straining at the seams. If the Blue Zones Solution was applied it would have huge benefits reversing current trends of obesity, diabetes, heart disease and some cancers.

2013 IRISH DEATHS BY PRINCIPAL CAUSES, PERCENTAGE, AGES 65 AND OVER 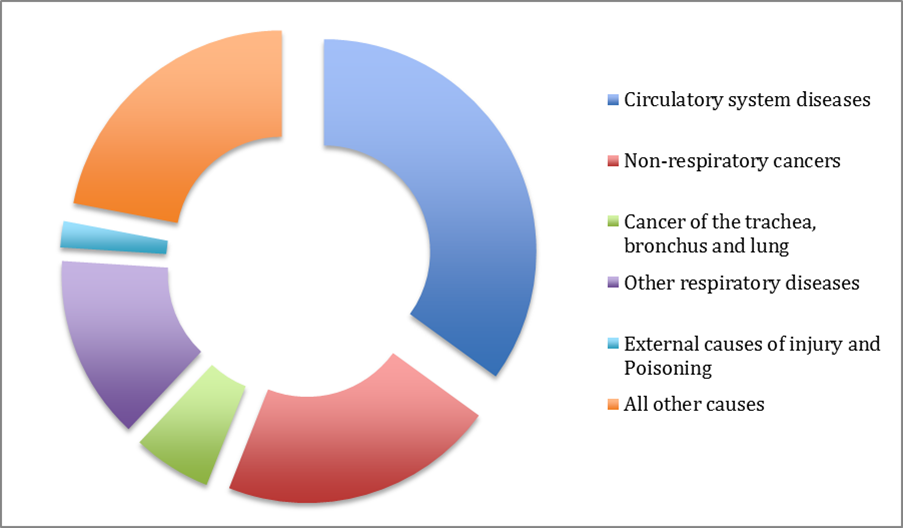 Most of us spend about 80% of our lives within a 30 km zone. Looking at this region we can ask, is it very easy to buy sodas and fast foods or are local fresh vegetables and farmers markets available and affordable? Is the public transport system efficient and affordable? Are there non-commercial spaces where people can meet and socialise together? Is good quality housing affordable and near schools? How are the elderly cared for and are children raised by professionals or by family members? Do schools encourage children to spend time in nature? How culturally acceptable are tobacco and alcohol? Today the Irish Government collects about 1.5 billion in taxes from tobacco and spends two billion on health costs related to tobacco. But how much is one life worth? Every night in Ireland 2,000 beds are occupied by people with alcohol-related illnesses.

The secret to longevity – for individuals and communities – does not lie with the government. Nor does it lie with the medical community, pharmaceutical or scientific community. The answer lies with the people in our community, the local politicians, restaurant owners, school administrators, employers, city planners, and so on. If we can educate these people with the proven strategies for health and well-being then we will all benefit. A gradual move towards a wholefood plant based diet, the integration of activity into our daily routine, the building and strengthening of families, friendships and social ties, and the investigation of our values, gifts and passion that will allow us to uncover a clearer purpose that can energise our life.

What is needed is change in the social and cultural ecosystem, that make healthy living the easiest choice. The Blue Zones solution offers a tried and tested programme that could be adopted to the specific conditions of any country. The evidence is there – all that is needed is to give it a trial.