Animal agriculture contributes to species extinction by converting species-rich natural ecosystems to arable land and pastures. Typically, this eliminates 30-90% of the biodiversity depending on the agricultural intensity and local cultural practices such as hunting and eating wild animals. The World Wildlife Fund (WWF) concludes that “Habitat loss is the greatest threat to the variety of life on this planet today and is identified as a main threat to 85% of all species described in the IUCN’s Red List (those species officially classified as “Threatened” and “Endangered”).”

The main reason for the conversion of forests and wild grass lands to agricultural land is for animal farming which occupies 80% of all agricultural land (see below).  Since industrial times, forests have been reduced by about 20 million square kilometres and large areas of the world’s grasslands have been converted to grazing land. The below map shows the increasing intensity of agricultural crop production from the year 1700 to 2000. 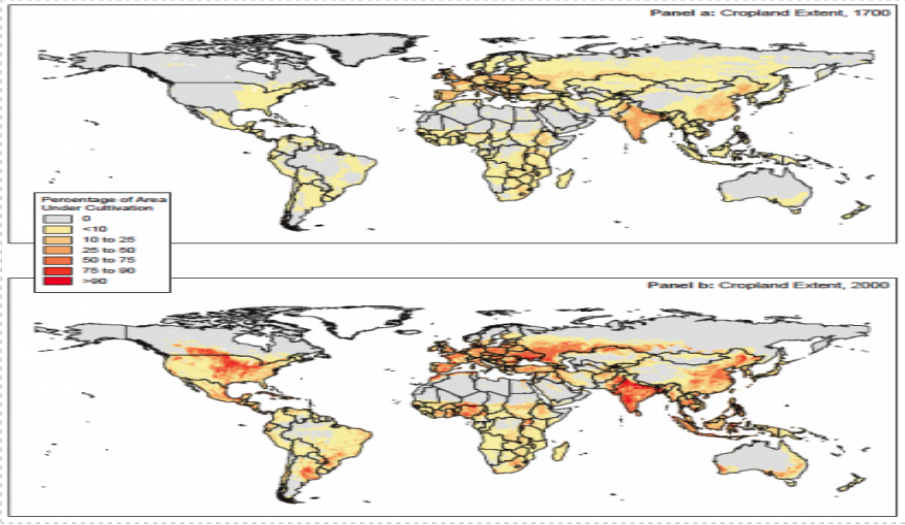 In 1700 in North and South America, Africa, Australia and Russia less than 10% of the land was intensively cultivated for crops and – more importantly – grazing occupied a much smaller area of land, allowing biodiversity to prosper. Today, outside of the deserts and the remaining forests, 15.5 million square kilometres are used for arable and permanent crops which is 11.5% of the planet’s land surface.  But today 25% of the total land surface is used for grazing. South America (except for parts of Argentina and Brazil), Western North America, Africa, Central Asia, and Australia are dominated by grazing (see below map).  Eastern and Central North America and Europe are dominated by crops occupying 70-90% of the land and over 70% of the crops produced in the US and the EU are fed to animals.  India and East Asia predominately produce crops for people but also have large animal agriculture sectors. 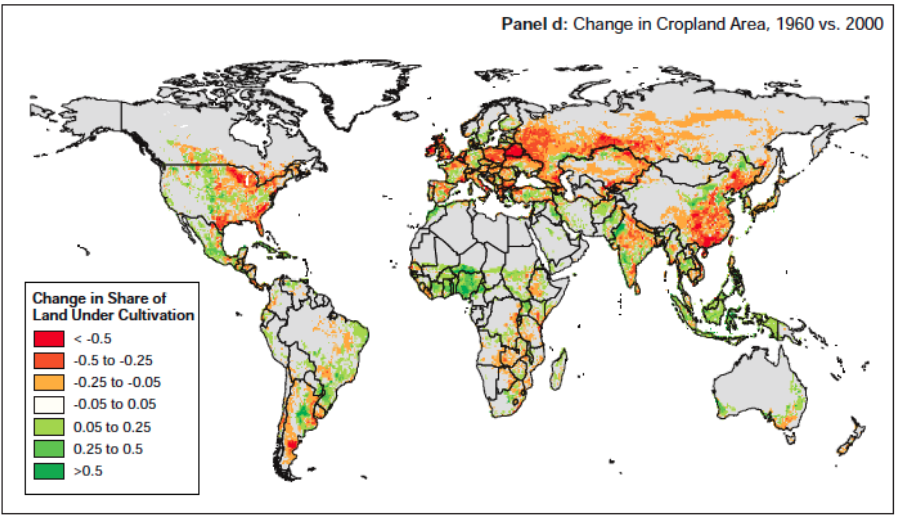 When ecosystems are converted to agricultural land for crops or grazing, predators are hunted and today they have been eliminated from vast areas of agricultural land because they are seen as a threat to livestock or a potential source of disease.  The US based non-governmental organisation, The Centre for Biological Diversity, highlights how a department within the U.S. Department of Agriculture known as Wildlife Services killed more than 2.7 million wild animals during 2016, according to their own data. This included “415 gray wolves; 76,963 adult coyotes, plus an unknown number of coyote pups in 430 destroyed dens; 407 black bears; 334 mountain lions; 997 bobcats; 535 river otters, including 415 killed “unintentionally”; 3,791 foxes, plus an unknown number of fox pups in 128 dens; and 21,184 beavers. The program also killed 14,654 prairie dogs outright, as well as an unknown number killed in more than 68,000 burrows that were destroyed or fumigated.”  In the UK, a program to kill 70% of the badgers killed 10,000 badgers in 2016. “Competing grazing” species are also eliminated (by hunting or starvation) because they eat the same food as the grazing farm animals and so compete with potential profits.  As human populations grow, the biodiversity in the remaining wild habitat are hunted for food and for the massive wildlife trade.

So how much of the planet does Agriculture occupy?

The total land area of the earth is 149 million square kilometres. Excluding Antartica it is 135 million km2. Today approx. 43 million km2 are deserts and arid lands (definitions vary depending on rainfall). These are barren areas of land with little rainfall and much lower concentrations of biodiversity.  Forests cover approx. 30 percent of the world’s land surface at just under 40 million km2. (3 million km2 are planted forests.) All the cities, towns, villages, roads, airports, etc. occupy a surprisingly small 2.3% of the land.  Agricultural land occupies 49 million km2 which now includes most of the world’s grasslands and ecologically productive lands. 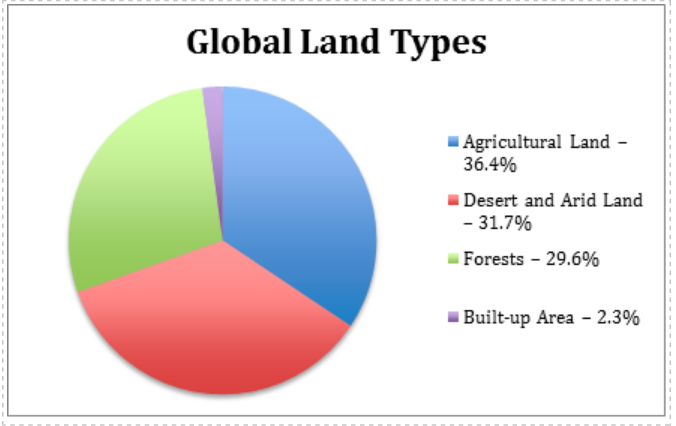 Today agricultural land covers 36% of the planet.  If you exclude Antarctica and deserts and arid regions, which support only a tiny fraction of the biodiversity, then agriculture covers 53% of the productive land.

And how much of this Agricultural Land is for Animal Agriculture?

According to the FAO the specific agricultural areas around the globe as of 2011 were;

80% of all global agricultural land is used to produce meat.

What has been the impact on the planet’s biodiversity?

Current biodiversity assessments (including Global Ecosystem Assessment, the IUCN Red List, and the WWF 2016 Living Planet Report) all agree that land use change from agriculture is the most significant driver of biodiversity change and loss of species. What they don’t clarify is that 80% of land use changes is for animal agriculture. Animal agriculture is the primary driver, by a huge margin, of global species extinctions and loss of biodiversity on the planet.  The World Wildlife Fund Living Planet Report for 2016 shows how and why biodiversity has declined in just the past 40 years.

Biodiversity intactness is the average proportion of natural biodiversity remaining in local ecosystems. In a 2016 study Newbold et al estimated that “land use and related pressures have already reduced local biodiversity intactness beyond its recently proposed planetary boundary across 58.1% of the world’s land surface.” Agricultural land now occupies 53% of the planet’s productive ecosystems and 80% of this is for animal agriculture. Perhaps animal agriculture is feeding the world and preventing malnutrition and famine?  No, I’m afraid not. In 2016 from the 1,308 million tons of coarse grain produced, a billion tons were used for feed (the remainder used primarily for the production of ethanol fuel). According to the International Feed Industry Federation an additional “around 300 million tonnes of feed is produced directly by on farm mixing” but is not included in the FAO figures.  Giving a total of 1.3 billion tons of feed-grain being fed to animals in 2016.

In addition an astonishing 2.3 billion tons of grass and alfalfa and a further 1.1 billion tons of other crops (legumes, turnips, kale, etc.) and stovers (the leaves and stalks of field crops) are consumed by farm animals.

What will the future hold?

A 2013 paper from the Institute on the Environment at the University of Minnesota, stated: “The world’s croplands could feed 4 billion more people than they do now just by shifting from producing animal feed and biofuels to producing food exclusively for human consumption”. My calculations above show that we could feed 6 billion people (this does not allow for food lost due to food waste which can be as high as 40%) by just eating a healthy plant based diet. We could easily feed everyone on the planet in 2050 (when the population is projected to be 9-10 billion) just using the current area of arable land and permanent crops.  This would allow us to return the pastures and grazing land (69% of the agricultural land) back to nature and other species.  This would allow us to rewild 25% of the Earth’s land surface and perhaps halt the accelerating 6th global mass extinction, while employing millions of people to reforest 20 million km2. This process of rewilding would eliminate the majority of methane production (from cattle and sheep) while naturally sequestering enough greenhouse gases to significantly reverse climate change. If we don’t make this change then the WWF predicts by 2020 – in just three years time – we will have lost two thirds (66%) of global wildlife populations.  The earlier we make the change the better. This change is necessary but it will take time as animals will have to be allowed to live out their full life span.

In the next issue of Vegan Sustainability we will highlight how the overexploitation of wild species through commercial fishing is the principal driver of biodiversity loss and ecosystem changes in the oceans, and how excess nutrients, freshwater abstraction (dams) and ecosystem destruction for animal agriculture (e.g. draining wetlands) are driving biodiversity loss in wetlands, rivers and lakes.