New Book Shows How 90% of Alzheimer’s Cases Are Preventable. 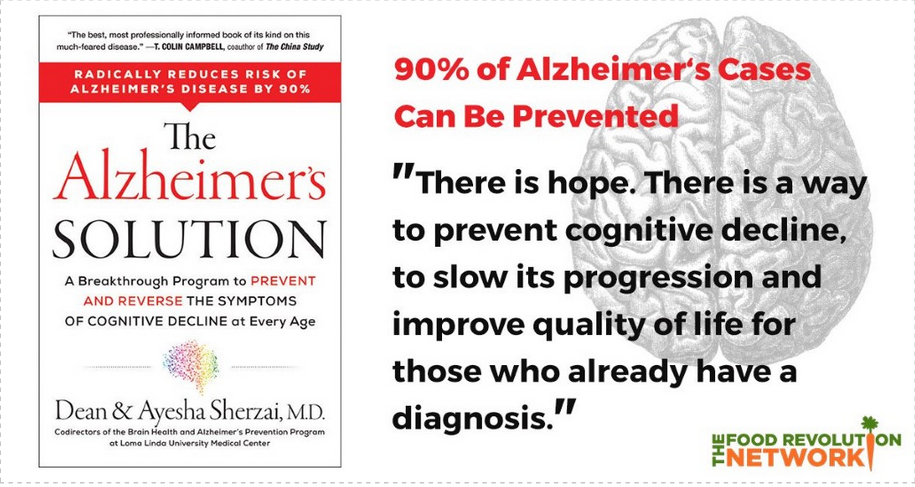 Excerpted from The Alzheimer’s Solution: A Breakthrough Program to Prevent and Reverse the Symptoms of Cognitive Decline at Every Age.

Get the whole book here.

If you would have told us fifteen years ago that we’d be writing the first book about the only scientifically proven solution to the international epidemic of Alzheimer’s disease, we never would have believed you.

Fifteen years ago, we were young neurologists practicing medicine the way we’d been taught. We were hopeful that the billions of dollars donated to fund Alzheimer’s research would soon result in a cure, some kind of pill that could affect the pathology we’d learned so much about. We pursued the most prestigious fellowships in our field—at the National Institutes of Health and University of California, San Diego—and worked with leading researchers at the forefront of the fight against Alzheimer’s. We wanted to find a solution. And we did, eventually—just not the solution we expected.

It was during those fifteen years that we conducted one of the most comprehensive studies on the incidence of dementia, and designed a groundbreaking protocol for Alzheimer’s treatment and prevention.

Our work began at Loma Linda University and then took us to Cedars-Sinai in Los Angeles before we returned to Loma Linda to continue our research and serve communities throughout Southern California and beyond. And it was during those fifteen years that we treated thousands of patients suffering from mild cognitive impairment to Alzheimer’s disease with our innovative NEURO Plan, helping them reverse symptoms, prevent further decline, add years to their lives, and change the trajectory of their health.

So many of these patients shared their stories with us. They told us that their parents or grandparents had Alzheimer’s and that developing the disease themselves was their single greatest fear. They told us about the humiliation of having to rely on caregivers to meet their basic needs.

They’d assumed there was no treatment, that they would be ostracized if others found out about their condition. Some of these patients were having trouble remembering names or had gotten lost in a familiar place. Some of them already had a formal Alzheimer’s diagnosis when they arrived at our clinic, unable to express themselves or recognize their loved ones.

If this sounds familiar to you, we want you to know there is hope. There is a way to prevent cognitive decline, to slow its progression and improve quality of life for those who already have a diagnosis.

This figure bears repeating: 90 percent of grandparents, parents, husbands, and wives should have been spared. Ninety percent of people living with Alzheimer’s or dementia didn’t have the resources or knowledge they needed to prevent this devastating disease.

Ninety percent of us can avoid ever getting Alzheimer’s, and for the rest of us, the 10 percent with strong genetic risk for cognitive decline, the disease can potentially be delayed by ten to fifteen years.

This isn’t just an estimate or wishful thinking: it’s a figure based on rigorous science and the remarkable results we’ve seen in our clinic.

As it turns out, the solution to Alzheimer’s has been hiding in plain sight. We now know that Alzheimer’s disease and overall cognitive health are deeply influenced by five main lifestyle factors represented by the acronym NEURO—Nutrition, Exercise, Unwind, Restore, and Optimize.

Direct links exist between poor nutrition, lack of exercise, chronic stress, poor sleep, the extent to which we challenge and engage our brains and neurodegenerative disease.

The truth is that the choices we make every day determine our cognitive fate—but there is almost no awareness of this crucial fact, despite the veritable crisis we’re in when it comes to Alzheimer’s.

The 5 aspects of a healthy lifestyle that form the heart of our unique NEURO Plan:

While it may be easier to blame a devastating disease like Alzheimer’s on a single gene, this false belief is killing millions. The truth is much harder to accept—that we are bringing Alzheimer’s disease into our households through the choices we make every day. But the truth is also liberating because it puts control back in our hands.

There were also other findings at the clinic—results that were almost unbelievable. We worked with a patient who had a bad habit of eating cookies and cake. Her glycated hemoglobin level was 13 (as revealed by an HbA1c blood test, which measures average blood sugar over a period of three months); a score of 6.5 or above is considered diabetic. She was beginning to forget names and struggle with simple tasks at her job, both of which were creating great anxiety. We helped her reform her diet and after three months, her HbA1c had plummeted to 6. Even more shockingly, she said her brain fog had lifted.

Another patient started walking around his neighborhood each morning and reported that he was thinking more clearly than he had in decades. A follow-up neuropsychological test confirmed that his memory had in fact improved. One woman in the early stages of cognitive decline was suffering from white matter disease (deterioration of white matter, a type of brain tissue). One year after she adopted a plant-based diet, an MRI revealed improvements in the size of her hippocampus. Our patients were showing us over and over that lifestyle could not only slow the progression of Alzheimer’s disease, but even reverse cognitive symptoms. Lifestyle was not just prevention: it was a potential treatment.

As the co-directors of the Brain Health and Alzheimer’s Prevention Program at Loma Linda University, we’ve guided thousands of people through the highly personalized process of lifestyle change.

We now have hundreds of these remarkable stories.

Behind all the science, behind all the statistical analysis and the papers published year after year in well-respected journals, is the plate of food on the table. The biggest factor in our long-term health is what we choose to eat three to four times per day.

Food determines the fate of our bodies—how we grow, how we age, and how we die. What we eat every day creates and re-creates both our cells and their supporting structures. What we fail to eat causes deficiencies that stress and traumatize the body. Though the brain comprises only 2 percent of the body by weight, it uses up to 25 percent of the body’s energy, and because food is energy, our brains are especially vulnerable to each nutritional choice we make.

Some researchers have argued that Alzheimer’s is essentially a garbage disposal problem, the brain’s inability to cope with what we feed it over a lifetime. Poor nutrition damages the brain in so many ways: it causes inflammation and the buildup of oxidative by-products, clogs blood vessels, and deprives your brain of the nutrients it needs to strengthen neurons, their connections, and critical support structures.

Because of its fundamental role in sustaining and regenerating the body, food is the single greatest tool we have in the fight against Alzheimer’s. As lifestyle physicians and researchers, we cannot overstate the importance of food for brain health: it is by far the most important lifestyle factor.

The dietary choices we make every day influence the prevention, delay, or progression of cognitive decline. Our clinical research has shown again and again, with patients of all ages and degrees of neurodegenerative disease, that adhering to a brain-healthy diet results in better cognition. It’s that simple.

Or is it? We all know we should eat “healthy.” We know that vegetables are a better choice than cake, that we should avoid sodas and sugary drinks and anything called “fast food.”  Most of us know that the steady increase in our consumption of processed foods over the past fifty years has led to an epidemic of obesity, heart disease, and diabetes. But many of us don’t understand the direct connection between food and the brain.

There is an assumption—perpetuated by scientists, researchers, and even doctors—that the brain is too complex to be influenced by our daily actions, that it’s somehow not part of the physical body. Many of our patients accept that alcohol consumption poisons the liver. Studies have proven that smoking causes lung cancer. Yet most patients have trouble accepting that the cognitive symptoms they’re experiencing could be the result of something as simple as food.

The brain is damaged exponentially by poor nutritional choices, more so than all other bodily systems given how hard it works, how much energy it consumes, and how much waste it’s responsible for clearing. Cognitive health is intrinsically linked to overall health, and when we fail to nourish our bodies, we also fail to nourish our brains. The inverse is true as well: giving our bodies the right foods protects and strengthens our brains.

Nutrition is unique in that it creates more anxiety and confusion than any other lifestyle factor in the NEURO Plan. With all of the overwhelming and contradictory information about nutrition, it might seem nearly impossible to come up with a plan that you feel confident is contributing to your overall health, let alone your brain health.

One website tells you to cut out carbohydrates. Your doctor, in a hurried appointment without much time for questions, says you should eat less meat—but how much is “less”?  Then you read a book that says some, but not all carbohydrates, are essential. A good friend tells you that fat is now considered healthy. A magazine article claims that vegetarian diets don’t provide all the protein you need.

Despite your frustrations and your very busy life, you do the best you can. You adopt a heart-healthy diet. You try to lose weight. You make a concerted effort to eat more vegetables and buy fewer pre-packaged foods, and hope that will be enough. If you’re in the midst of this struggle yourself, you’ve come to the right place.

Though current research points to an ideal diet for brain health—a whole-food, plant-based, low-sugar diet with little meat and dairy—numerous studies have also proven that incremental steps toward brain-healthy eating have tremendous benefits. Please keep this important concept in mind as you read. The goal is not necessarily to eat perfectly for the brain, but to figure out the best, most sustainable diet for you based on verified research and your unique circumstances.

Wondering which foods you should eat to protect your brain health?  Here are 10 foods that may prevent dementia or Alzheimer’s.

And if you’re inspired, please share this article with your friends and family and your networks. Together, we can change the world for the better!

People often ask me about the best way to detoxify.  Am I a fan of...
Previous articleThe Cetacean Brain and Hominid Perceptions of Cetacean Intelligence
Next articleThe Lifestyle Carbon Dividend