Could virtual reality be the new face of activism? Animal Equality’s ‘iAnimal’ is a game changer not only for animal rights, but for any outreach.

Animal Equality may have just changed the future of outreach with their new iAnimal campaign. By using virtual reality technology, viewers are transported into the life of a pig raised for meat. With the headset strapped on, the viewer cannot simply look away as they travel through the life of a pig, starting from birth and ending in the slaughterhouse. You don’t only see the inside of a factory farm: you are transported there, with 360° views allowing you to look anywhere and truly experience being in the environment (at least visually). Unlike many other videos, Animal Equality opted for everyday images: animals lying in excrement, looking around, misery in their eyes. This only contributes to the power of the campaign, as the video is clearly depicting not the extreme or unusual, but the common and everyday practices of animal factory farms. 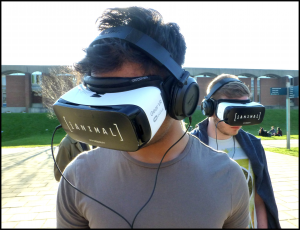 In the UK, I attended the launch screening at Bristol VegFest, where those most sympathetic to the cause were given the opportunity to be the first to view the seven-minute video. I was blown away when I attended one of their all-day outreach events at King’s College in London. Unlike perhaps any other animal advocacy campaign, most people approaching the stand were young men. This particular population is incredibly important: they tend to be the least likely to reduce the amount of animal foods they eat while eating the most of these foods.

The young men approaching rarely knew what the campaign was about and stared as though transfixed at the virtual reality headsets, thrilled to be trying out this new, trendy technology. Even after being told about the campaign, not one person I saw turned away. Seven minutes later, they lowered their headsets and seemed completely transformed. One man talked to me about his vegetarian friend and asked me question after question about how he could get more information about plant-based foods and how to reduce his meat consumption.

The campaign is running across Universities and main streets in eight countries across Europe, America, and Asia and has been translated into English, German, Spanish and Italian. Animal Equality is already planning to produce another iAnimal video in the fall focused on the lives of chickens.