The Plant Based Treaty is a new initiative by members of the Animal Save Movement whichis due to launch on the 31st of August. 10 million individuals, 10,000 organizations and businesses, and 50 cities are invited to endorse the call to action and put pressure on national governments to negotiate an international Plant Based Treaty. 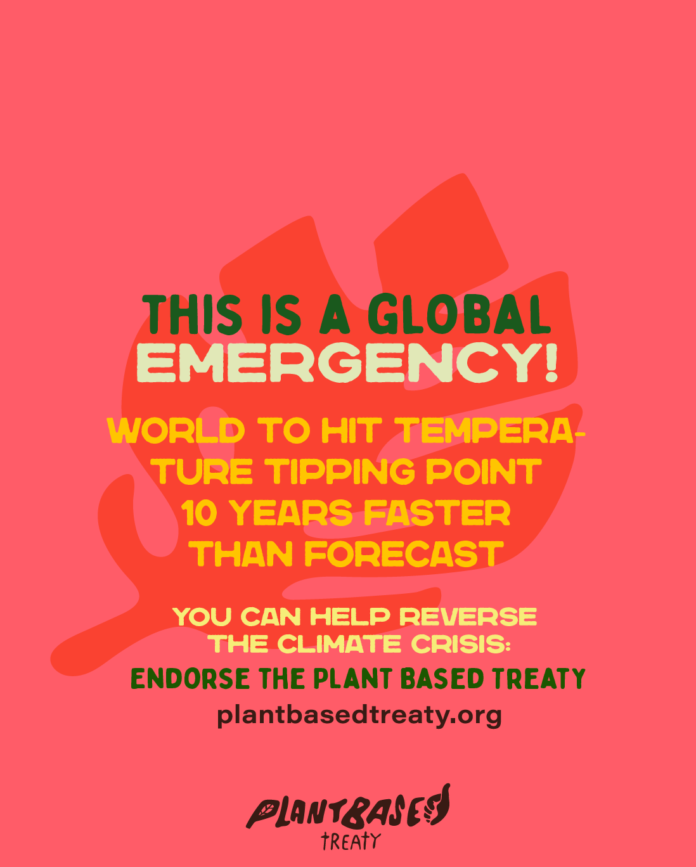 Modelled on the Fossil Fuel Treaty, the Plant Based Treaty aims to combat the current climate crisis by encouraging individuals, groups and political leaders to commit to a move to a plant-based diet, as well as actions to de-incentivise any further expansion of animal agriculture.   The campaign has received widespread support from high-profile campaigners.

Commenting on the recently released IPCC climate report, Nicola Harris, director of communications at Plant Based Treaty, said the report makes it clear that rapid, strong and sustained reductions in greenhouse gases are needed now. “We cannot wait two, five or 10 years. We need to transform to a plant-based food system as a matter of urgency if we are to reduce methane to safe levels and slow global warming,” she said.

The Plant-Based Treaty is based on 3 core principles:

You can read the full text of the Treaty here.

Some of the treaty action points include:

Anita Krajnc (co-founder of Toronto Pig Save) is global campaign coordinator and Nicola Harris (director at Animal Save Movement) is co-director of communications for the Plant Based Treaty.

You can endorse the treaty here as an individual or an organisation:

Here are some of the reasons why we need to move away from animal...

Moving to a Vegan Agricultural System for Australia: Part 2

This article is based on the Vegan Australia "Moving to a vegan agricultural system"...

A vegetarian beef farmer is an unlikely thought, but this is exactly the contradiction...
Previous articleIPCC Sixth Assessment Report (2021)
Next articleEuropean Parliament approves budget to continue the destruction of nature at sea