I attended the first ever vegan festival in the North of Ireland on Saturday the 9th of April at the Ulster Hall, Belfast. The event was organised by Gareth Edwards of Farplace Animal Rescue. Gareth has a great deal of experience organising vegan festivals around the UK and all profits from these events go to animal rescue projects. 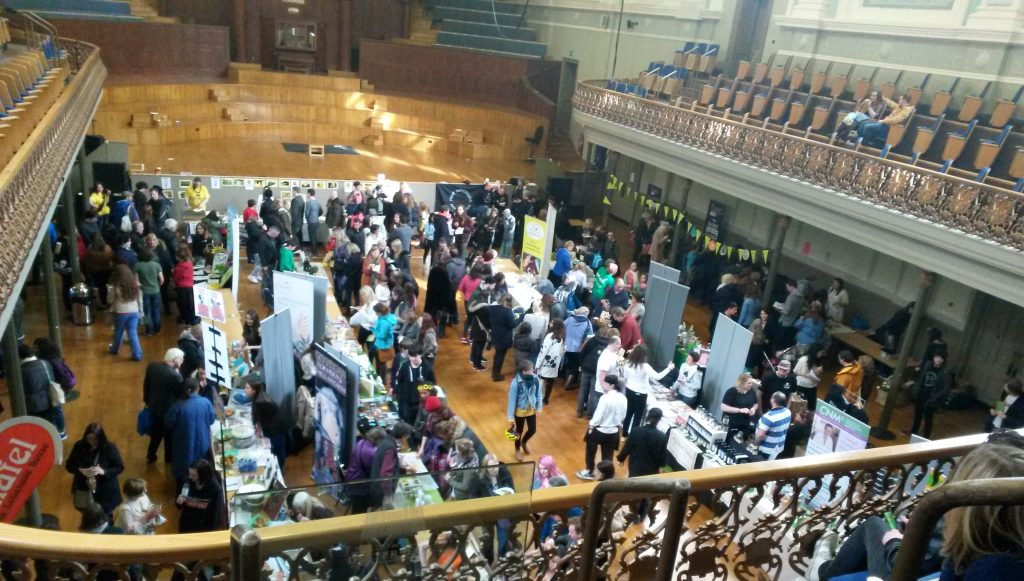 There was a really positive, uplifting atmosphere in the event hall all day and it was literally buzzing with activity, as live bands provided a musical backdrop to the proceedings. The food stalls were a feast for both the eyes and the taste buds offering everything from cupcakes, cream cakes, chocolates, pastries and crepes to hotdogs, falafel, burgers and vegan cheeses. Drinks were also available including fresh juice, kombucha and a new drink called Besos de Oro – a cream liqueur which is both dairy-free and vegan. There were many stalls selling cruelty-free skincare, soaps and toiletries as well. Vegan, animal rights and animal advocacy groups were well represented with stalls organised by the Go Vegan campaign, Hugletts Wood Farm, Cat’s Protection, the League Against Cruel Sports and many more. Upstairs there was a constant stream of inspiring talks, films and cooking demonstrations.

Approximately 2500 people attended the event, with many queuing outside on the street for over an hour. Next year’s event is already being planned and will take place at a much larger venue to accommodate an undoubtedly larger crowd. I must say that I thoroughly enjoyed the day and it was clear that, judging by the event’s popularity, veganism – in the North of Ireland at least – is an idea whose time has finally come.  Well done to all involved and I’m looking forward to next year!