Moving to a Vegan Agricultural System for Australia – Part 1

By Greg McFarlane of Vegan Australia

The road to an ethical Australia, which fully values the interests of all animals, may be long but we can accelerate the move towards this goal if we develop an understanding of what a vegan Australia would look like and what changes would be required. This goal is achievable and by moving towards an animal-free agricultural system, Australia can become an ethical world leader.

The case for moving towards a vegan agricultural system is based on the understanding that the use of animals for food, clothing or any other purpose

This study uses sound economics and agricultural and environmental science to outline the transition and the changes in land use and agriculture are guided by the following principles.

Shared responsibility will be crucial to ensure fairness. Moving to an animal-free agricultural system will result in significant changes to large areas of Australia, potentially impacting the lives and livelihood of a number of people. The changes will result in major benefits to the environment and climate and these benefits will be shared by all Australians. To ensure that rural Australians are not asked to shoulder this burden by themselves, the economic costs of these changes must be shared by society.

Since European settlement, the Australian continent has been extensively modified by animal agriculture, with livestock (mainly cattle, sheep and dairy) grazing native or modified pastures on 56% of the continent. About 3.5% of land is used to grow plant foods for humans.

The area of the Australian continent is about 770 million hectares (Mha). Of this, 429 Mha (56%) are used to graze beef, sheep and dairy. In addition, 3 Mha are used for fodder crops to be fed to farmed animals and 4 Mha are used to grow grain to be fed to farmed animals. This compares to the 20 Mha used to grow plant foods for humans (both domestic consumption and export). About 30% of feed for dairy cattle comes from crops and up to to 90% of the food given to farmed chickens and pigs are grains fit for human consumption.

Animal agriculture uses over 430 Mha (well over half) of Australia’s land mass, consisting of about 300 Mha in the extensive zone and 100 in the intensive zone. We estimate that about 2.9 Mha would be required to grow the extra plant foods for domestic and overseas human consumption. This would leave vast areas of land available for other uses beneficial to people and wildlife. Possible uses include the following. (Note that the suggested areas are very approximate.) 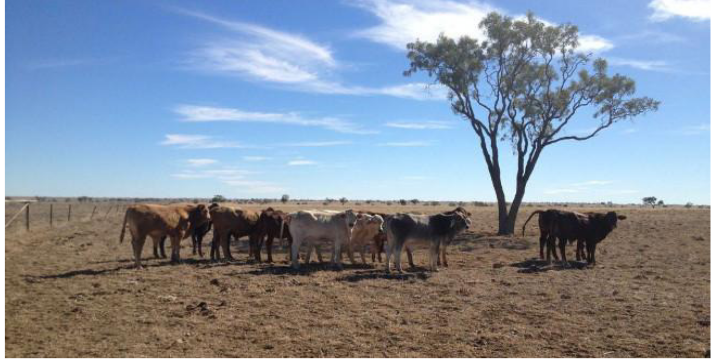 One interesting example of a change in land use in line with a vegan agricultural system is the destocking and regeneration of the rangelands at Wooleen Station in Western Australia. This land had been over-grazed for over 100 years resulting in most of the prime land being in poor or very poor condition with some of it being badly eroded and degraded to the point where it was never expected to recover. The situation at Wooleen is typical of neighbouring areas and in fact of much of the Australian rangelands.

In 2007, the leaseholders of the 200,000 hectare station “Wooleen” decided to completely destock the entire property for four years. The re-establishment of the vegetation “has progressed much better than expected”. A multitude of plants re-appeared, including the slow growing, but sturdy, saltbush. This regrowth occurred because cattle were no longer grazing and despite a long drought. Some plants returned to areas where they were never expected to grow.  Plant and animal species threatened with extinction also began to return. Perennial plants, crucial to restoring the land, were among those re-established.

During the time when no farmed animals grazed, grasses were planted and infrastructure was changed to replicate the natural systems that had been lost, culminating in the Roderick River flowing clear of eroded sediment for the first time in living memory. In just four years, a red river had been turned clear by removing farmed animals from the land and restoring some of the natural systems. “Nature is bouncing back.” Please see video presentation on the regeneration at Wooleen.

The image above shows the transplanting of native grasses into flowing creek lines after good rains.

In Australia, most grazing land is owned by the state and leased to farmers. It is interesting to note that a condition of the lease is that the land must be stocked with farmed animals. The majority of income must come from grazing. Other uses, such as tourism, are not encouraged. In fact, the leaseholders of Wooleen had to wait one year for permission from the Pastoral Lands Board to remove stock from the property. These unhelpful regulations act as barriers to change and will need replacing to be more in line with present day needs of the country. The success of this case study in such a short time suggests that it may be possible to restore land quickly and without great expense in many parts of Australia.

Vegan Australia is supporting this research and are looking for funding to be able to progress this project as quickly as possible. They are also looking for other researchers to work on parts of it. If you can assist in any way, please email Greg McFarlane at greg@veganaustralia.org.au

The next issue of Vegan Sustainability will feature Part 2 of this article where Vegan Australia explore the effects of transitioning to a Vegan Agriculture System from an economic, environmental, and health perspective including what steps need to be taken to make it happen.