Dr. Conor Kerley examines the connection between diet, specifically saturated animal fat, and MS and shows how a plant-based diet provides multiple mechanisms that could be beneficial for preventing and treating MS including changing the gut microbiome and the immune system. 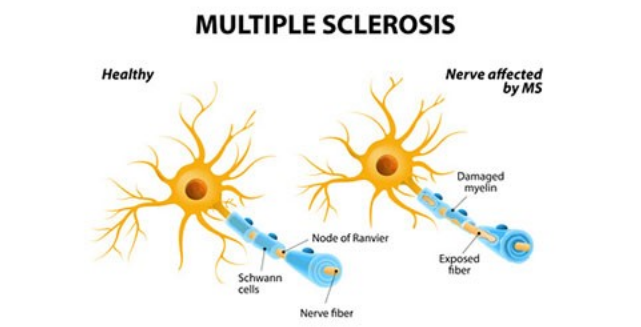 There are several different forms of MS presentation:

Because the brain and spinal cord have so much control over how the body functions, MS can cause many symptoms throughout the body, depending on where the scars occur. Major symptoms include:

Other vague symptoms, such as fatigue or cognitive difficulty may become prominent with time and may correlate with the pathological progression.

What is the Cause of MS?

MS is a complex disease with many contributing factors. Therefore, the exact causes(s) of MS remains unknown. It is known that there are genetics factors and environmental factors. The genetic factors have been estimated to contribute about 25% to MS[1]. This is good news! 75% of MS risk is environmental, which means we can potentially alter our environment and hence the risk of getting MS or of MS getting worse. There are many environmental factors which are of interest in MS, including stress, infections, sunshine and vitamin D. But what about nutrition?

Research dating back to the 1940s demonstrated that MS rates dropped during WWII. Interestingly, MS rates increased after the war. Some scientists and neurologists thought that rationing of foods may have contributed to this. Therefore, studies were designed to see if there was a link between rationed foods (butter, cheese, meat, etc.) and MS rates/severity.

Three more advanced studies were published in the 1990s. A large, American study looked at many aspects of lifestyle (46 in total) in relation to MS. The two most important factors were high meat consumption and a diet high in dairy/low in fish[8]. This was followed by one of the largest studies to date, which involved 36 countries. Once again, high dietary fat and particularly saturated fat (meat, cheese, butter etc.) were strongly associated with MS[9].

All of these studies are observational. Although they are both interesting and consistent, it is possible that being diagnosed with MS could cause somebody to change their diet and eat more meat, butter, cheese, etc. Stronger evidence comes from trials where participants actually changed their dietary habits and researchers examined the effect on MS rates/severity. Unfortunately, there is a lack of these trials but importantly, the trials that do exist report similar findings and are consistent with the studies I’ve introduced above. We will now explore these trials.

Enter Dr. Roy Swank, a neurologist who published almost 300 scientific papers, worked at several leading neurology institutes (until age 94) and lived to be 99! Swank was one of the first to think there was a connection between diet, specifically saturated animal fat, and MS. As such, he conducted some of the early studies associating MS rates with saturated animal fat intake[2][3]. Based on his own research and his own ideas, Swank was the first to put this association to the test. Swank recruited a group of 144 people with MS and asked them all to follow a very low saturated fat diet (15g/day, which is equivalent to 1.5 ounces of cheddar cheese or 1.5 pints of milk). Some people stuck with the diet (compliant) and some did not (non-compliant). Swank published his results 3.5 years, 5 years, 7 years, 20 years, 34 years and 50 years after the study began. This alone is a remarkable achievement – most dietary studies last weeks or months! Further, Swank published in some of the most prominent medical journals. The results showed that for those who complied with the low saturated fat diet, 95% remained physically active. However, for those who did not comply with the diet, only 7% remained physically active. 20% died from MS in the compliant group whereas 80% of those who did not comply with the diet died of MS causes. Regardless of disability at the start of the trial, those who stuck to the diet did not get significantly worse![15][16]

Writing about Swank’s work in the Canadian Journal of Neurological Sciences, one radiologist wrote: “The results of his 34-year study published in The Lancet in 1990 remain the most effective treatment of multiple sclerosis ever reported in the peer review literature”[17].

There is a lack of dietary trials in MS but Swank’s work does not stand alone. A three year trial in the UK called Action into Research in MS (ARMS) demonstrated that those with MS who were able to decrease saturated fat while increasing polyunsaturated fat and antioxidants did not deteriorate while those who didn’t change their diet did deteriorate[18]. Two small, more recent trials demonstrated decreased flare-ups and disability when those with MS decreased their saturated fat intake and increased their omega-3 intake[19][20]. A more recent, ambitious trial was designed by Dr. John McDougall and the Department of Neurology at Oregon University (where Swank did a lot of work) to compare a low fat, plant-based diet to a standard diet. This one year trial did not find any differences in brain MRI outcomes, number of MS relapses or disability. However, the plant-based group did have reductions in body weight, cholesterol and fatigue[21].

In recent years, a group in Australia led by Professor George Jelinek (who himself has MS) conducted five day education sessions for those with MS. The education is similar to the Ornish style program: smoking cessation, daily meditation, exercise and sun exposure/vitamin D supplementation coupled with a mostly plant-based diet. Research on these programs has demonstrated improvements in quality of life one year and five years after these five day education sessions[22][23].

How Could Nutrition Contribute to MS?

We’ve already mentioned that MS is a complex, autoimmune disease. Avoiding smoking, exercising, stress reduction techniques as well as adequate sunshine and vitamin D all seem important. Additionally, nutrition does seem to be important for MS prevention and treatment. The existing evidence regarding nutrition and MS is consistent and demonstrates a link between diets high in saturated animal fat and MS. Evidence also supports a whole foods, plant-based diet to decrease MS severity.

There are multiple mechanisms by which a whole foods, plant-based diet could be beneficial for preventing and treating MS including changing the gut microbiome and the immune system, decreasing oxidative stress and inflammation and increasing blood flow around the body, including to the brain.

A beneficial effect of a plant-based diet on MS has not been conclusively proven. This would require several large, expensive and lengthy randomised, controlled trials. This is why neurologists, dietitians and MS Societies do not routinely recommend a plant-based diet. However, there are several interesting trials ongoing or being planned. While we wait for science to progress, based on consistent and extensive evidence, a whole foods, plant-based diet seems appropriate for those with MS or at risk of MS. As someone with MS, it is what I eat and what I recommend to my MS patients.

You can read more of Dr. Kerley’s articles here including: From Scared School Boy with MS to Doctor of Nutrition

You can find a complete list of the references for this article here.

Conor Kerley, PhD, BSc, H. Dip is an Irish dietitian and nutrition researcher. Dr. Kerley developed an interest in nutrition and lifestyle after becoming ill at age 15. He then went on to study nutrition and dietetics at Trinity College Dublin and the Dublin Institute of Technology. It was during this time that he read The China Study and became interested in plant-based nutrition. After graduating, he earned his PhD from the School of Medicine and Medical Sciences at University College Dublin before completing postdoctoral work with The School of Human Health and Performance at Dublin City University. He is currently a content specialist with the Center for Nutrition Studies. Find Dr. Kerley on Facebook, Twitter, and LinkedIn.

About the T. Colin Campbell Center for Nutrition Studies

Our society is at a critical crossroads. Accepted norms and business interests are at odds with scientific discovery. The work we do strives to educate and awaken as many minds as possible, so that collectively we may choose the wiser path – one of whole nutrition, leading to whole health, and allowing us to live stronger, healthier, happier lives. Whole lives.  What does it mean to live a good life? Is it a life lived as healthy as possible? As energetically as possible? As “alive” as possible? The T. Colin Campbell Center for Nutrition Studies, believe it is all these things. A life lived with less uncertainty about maintaining health and more focus on building happiness – enjoying our work, our leisure, and our loved ones to the fullest. They call this living a whole life — a life scientifically proven to be achieved by doing a very simple thing: understanding and implementing a whole food, plant-based diet. Since 2009 their online Certificate in Plant Based Nutrition education program has empowered thousands of individuals to understand and implement the “live a whole life” philosophy in a broad variety of endeavors. More recently, we have invested in making available very low-cost education for medical students and licensed physicians. Their website has dozens of research based articles as well as great recipies and tips for easy plant based living.

This article was first published in Oct, 2017 in www.nutritionstudies.org – republished here with their kind permission.

This Report highlights how the global food system is the biggest driver of destruction...

The world is changing fast with disruptions of food, commerce and social connection altering...
Previous articleAnimal Agriculture is the key cause of Climate Change and Veganism is the solution
Next articleRestoring China’s Loess Plateau