So, I know its winter, not the foremost time to be thinking about gardening—but a good time to start thinking about hauling that seaweed to compost it in preparation for your spring garden beds! 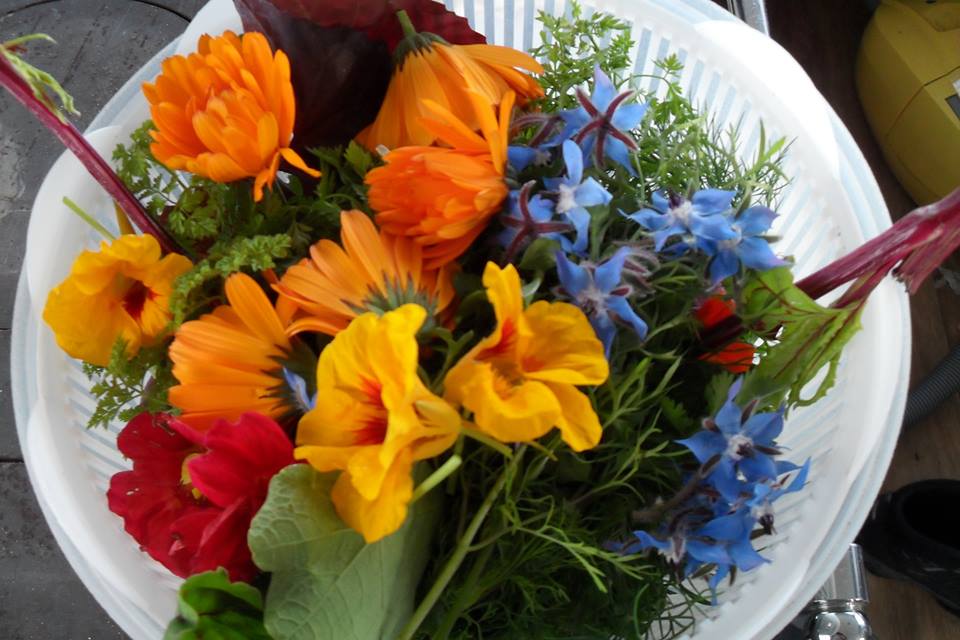 Last year I moved to a caravan site and there is unused land to the back and the sides.  The land is absolutely marginal land, basically pure sand with only couch grass, bindweed, thistle, and bramble trying to take it over, and being only about 200 feet from the sand dunes and the sea it is exposed to the salt air and mist as well as the mad winds that come from all directions on a frequent basis. Not to mention the chronic slug problem. So, I decided to see what (if anything) I could grow that would survive in these conditions.  I was aiming to find stuff that the slugs didn’t like and also that was preferably perennial.  With little experience, late planting, suboptimal soil, slugs constantly looking for dinner, and a lot of neglect and ignorance, I still ended up with a good handful of varieties of greens, herbs, and flowers, enough to make a good mixture for a tasty salad every night.

Gardening—especially for first timers—can either be rewarding—resulting in someone wanting to do it again the next year, or totally disappointing and frustrating—often resulting in a total abandonment of ever wanting to attempt it again, or at least not in the near future.  So I want to give you an idea of at least a few things you can plant that you are likely to have rewarding success with the first year, whether you are new to gardening or just looking for some ideas about types of plants that will grow well and sort of take care of themselves. Basically, I feel like if these types of plants survived under the suboptimal conditions I gave them, they will grow and survive just about anywhere.  I am not an expert gardener, I work mostly through trial and error and chance, but this is what worked for me.

I built frames for raised beds and got in a trailer-load of topsoil, because there was literally just no soil to even work with as a starting point.  Instead of animal manure, I added loads of seaweed as a buried layer.  I then planted seeds in the topsoil, and basically neglected the garden with the exception of a little weeding.  A few varieties were started in trays or pots first, then transplanted (as noted below).  I later learned that the seaweed should already be rotted, preferably mixed in with other compost or soil, before you add it in, and it doesn’t decompose as it should when it’s in a buried layer and not in the presence of oxygen.  Another good option is to use the seaweed as mulch on top of the soil around the plants, then it feeds them as it breaks down.  It is also advised to wash the seaweed in fresh/rainwater or leave it spread out for the rain to wash, so as to not add too much salt to the soil.

I planted 5 beds, but you could certainly start off with just one with a mixture of things in it.  Again, the purpose is to be able grow things that are rewarding and require little care.

Number 1 on my list is edible flowers. These are fabulous as they take little care, keep putting out flowers all season, are pretty to look at, tasty to eat, attract and provide food for bees, make your salads look beautiful, and make you feel like you had gardening success.  If you were going to start off by growing only one thing, I would say that it should be edible flowers. I grew the three most common varieties that I know of:

Calendula:  These were started from seed in April/May, scattered in a rectangular bin filled with soil and compost and then transplanted into the beds.  I planted two rows of them and they totally took off, grew very bushy, and have constantly put out flowers even now into mid-November! The orange flower petals look very pretty in salads, and there are plenty of stems for picking to put in a jar on the table as well.  The calendula produces so abundantly that they can be freely picked and gifted to friends as well. They also produce abundant seed and should either be perennial or self-seed for next year.  No slug interest.

Borage:  Started from seed in April/May and then transplanted into bed. Very pretty little purple or pink star shaped blossoms with a very mild taste. Even a single plant grows loads of branches with tons of buds and there literally seem to be new blossoms every day, even into November. Seems loved by bees. Perennial to my knowledge. Slugs don’t seem interested.

Nasturtium:  Started from seed in April/May and then transplanted. Abundant flowers in a variety of red/orange/yellow tones. Peppery taste with a touch of sweetness. Self-seeds for next year, to my knowledge. Likes to climb. Some slug damage.

Mint:  Started from seed in containers, then transplanted.  Perennial.

Chervil:  Started from seed planted directly in beds. May be short lived (goes to seed), so plant new seeds every few weeks. May self-reseed for you. One of my favourites, tender, liquorice-flavoured green. No slug interest.

Dill:  As with Coriander. No slug interest.

Beets: I grew these primarily for the greens. Planted from seed, direct in beds. Grew lushly. Plant new seed every few weeks. Some slug interest but not decimating.

Sorrel/Red Sorrel:  Sorrel is a wild edible with a tart taste. Red Sorrel I planted direct in beds from seed.  Not much slug interest in the wild sorrel, but they do like the red sorrel, though it is surviving. Perennial.

Parsley: Started in trays then transplanted.  One bed cleared off by slugs as seedlings but the rest is ok and growing fine with no slug interest once it is somewhat mature. Plant a lot and you will have some for winter use.

Kale: (Green Curly and Red Russian) started in containers then transplanted. Slugs love it and cleared off a good few plants when young and are still at the older ones.  Fair amount of slug damage but if you plant enough you will still get some for yourself. Less likely to decimate the plant as it gets older, though still leaves lots of holes in leaves.  Plant a lot and you will have some for winter use.

Minutina: The cutest green I grew this year.  Planted direct from seed into the beds. Salty-tasting narrow-leaved green with cute little horns. Perennial.  Slugs like it but it still keeps on trucking, albeit with a lot of slug nibbles.

Spinach: planted direct, and Cos lettuce; transplanted, also grew OK in this soil/situation, but it gets a LOT of slug damage.

(Look out for volunteer chickweed plants; they are a wild edible that makes a nice addition to the salad mix. Ditto with dandelion and plantain greens.)

Most of these plants can be harvested by taking off a few leaves or stalks or flowers, leaving the plants to keep growing and producing more throughout the season.

How I use these plants

I suppose my salad-making isn’t traditional, but rather than choosing one type of green or a head of something to use for a salad, I take bits and pieces of everything, a few leaves or stalks from each type of green or herb, wash, chop finely, and mix them all together with a few edible flowers sprinkled in oil or tahini and lemon dressing, usually with some chopped fruit or nuts thrown in.  Many of these plants have strong flavours, but they balance one another nicely when finely chopped and mixed.

Kristen Butler is a vegan living in Co. Kerry, Ireland, who hopes to show other gardeners how it’s possible to garden without animal product inputs.

This Poison Cartel is now driving the sixth mass extinction of plant and animal...
Previous articleEnergy Conservation
Next articleThe Blue Zones Solution: Eating and living like the world’s healthiest people