By Navdanya and Seed Freedom

For a century today’s Poison Cartel has engaged in a war against life on earth, against diverse species, against the land, against farmers and society, against our bodies and our health, against stable climate systems, against knowledge, science and scientists, and against democracy and freedom. By continuing on this toxic path, we could be living the last century of human life on earth.

This Poison Cartel is now driving the sixth mass extinction of plant and animal species that form the foundation of our food supply. Poison based industrial agriculture is the biggest driver of species extinction from birds and bees, to forests (the Amazon) to soil organisms and vital species in our gut flora. Industrial monocultures have wiped out the diversity of crops we grew and ate, the bees that pollinate our crops while pesticide producing GMO plants have wiped out 90% of the monarch butterfly. Fossil fuel based toxic agriculture is also responsible for 50% of the greenhouse gases leading to Climate change.

In spite of its vital importance for human survival, agricultural biodiversity is being lost at an alarming rate. We need biodiversity to allow for evolution and thus capacity of adaptation. This diversity has been developed over thousands of generations and our duty is to safeguard it for those in the future. Farming with poisonous chemicals means debt and displacement of peasants and small farmers, leading to the unprecedented epidemic of farmers’ deaths and suicides in India and the refugee crises from Africa, Syria and other vulnerable countries.

Research shows that the poisons in our food and environment are adversely affecting our children through lower IQs, ADHD, autism spectrum disorders, lack of physical coordination, loss of temper/anger management issues, bipolar/schizophrenia spectrum of illnesses, depression and childhood obesity. The research also shows that these poisons are responsible for the epidemic of non-contagious chronic diseases such as liver and kidney damage, reproductive problems, birth defects, cancer, developmental neurotoxicity, endocrine disruption, metabolic disruption and epigenetic mutations.

Products and technologies of the poison cartel are tools of violence, destruction and death.  Agroecology and Regenerative Organic Farming, while providing food and nutrition, are also solutions to the climate crisis, and can halt the current march towards the sixth mass extinction, including the extinction of our own species.

As Gandhi reminded us, the Earth can provide enough for everyone’s needs, but not for a few people’s greed. On Gandhi’s birth anniversary, the International day of nonviolence, we pledge that individually and in our communities we will grow and eat poison free organic food to protect our health and that of other species.

This is the nourishment that humanity needs as a basis for continuing life on Earth.  The shift from a greedy and violence-based paradigm to thinking and living cooperatively and non violently has become a survival imperative. 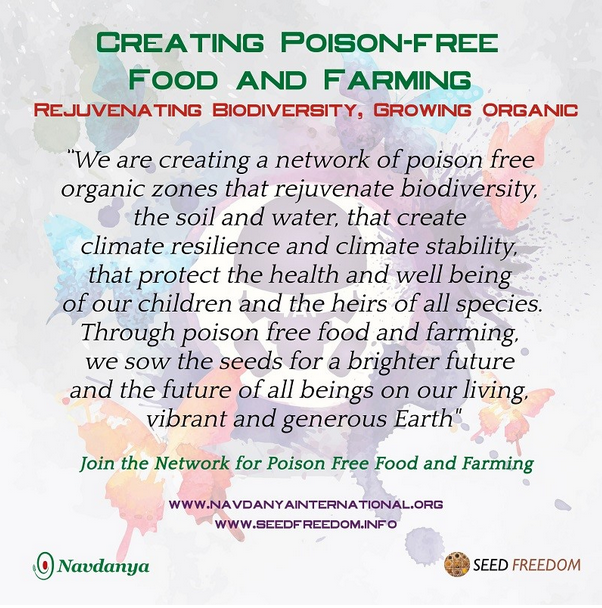 You can join the Network for Poison-free Food & Farming and pledge your support here.

You can read an excellent article, How agricultural chemicals are poisoning our world. And all the (false) myths about them, here.