In China’s Loess Plateau they realised that the crucial step toward eco-system restoration is the understanding that, in the long run, safeguarding ecosystem functions is vastly more valuable than the production and consumption of goods and services.

The birthplace of the largest ethnic group on the planet, China’s Loess Plateau was once an abundant forest and grassland system. One of the central civilisations on Earth grew on the plateau while simultaneously reducing biodiversity, biomass and accumulated organic matter.

Over time, the landscape lost its ability to absorb and retain moisture, causing an area the size of France to dry out. Without the constant nutrient recycling from decaying organic matter, the soil lost its fertility and was eroded away by the wind and water, leaving a vast barren landscape. By 1,000 years ago the site of the magnificent early dynasties in China had been abandoned by the wealthy and powerful. By the mid-1990s the plateau was mainly famous for the recurrent cycle of flooding, drought and famine known as “China’s Sorrow”. 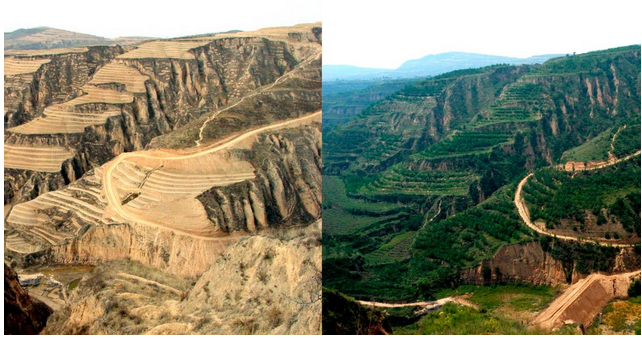 Today, large areas of the Loess Plateau have been restored. The changes have been brought about by differentiating and designating ecological and economic land, terracing, sediment traps, check dams and other methods of infiltrating rainfall. At the same time, efforts have been made to increase biomass and organic material through massive planting of trees in the ecological land and using sustainable, climate-smart agricultural methods in the economic lands. 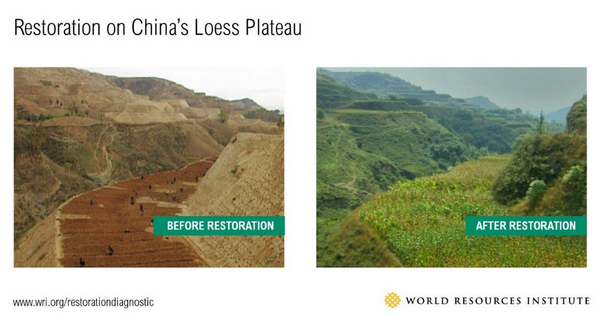 The crucial step toward restoration was the understanding that, in the long run, safeguarding ecosystem functions is vastly more valuable than the production and consumption of goods and services. It therefore made sense to designate as much of the land as possible as ecological land. This also led to a counter-intuitive outcome: concentrating investment and production in smaller areas was found to increase productivity. It’s a clear illustration of how functional ecosystems are more productive than dysfunctional ones.

The work on China’s Loess Plateau shows that it is possible to restore large-scale degraded ecosystems. This helps us adapt to climate impacts, makes the land more resilient and increases productivity. The Loess Plateau also shows that valuing ecosystem function higher than production and consumption provides humanity with the logical framework to choose to make long-term investments and see the positive results of trans-generational thinking.