This report is taken from the following main sources by James O’Donovan (VSM) May, 2018:

In 2016 global production of soybeans was 324 million tonnes on 1.2 million Km2, a 5% increase from 2014.  The US used to be the dominant producer of soy, but low land and labour costs, supportive government policy and a lack of environmental enforcement with, in many cases, illegal deforestation has fuelled explosive growth in South America, initially in Brazil, but now also in Argentina, Paraguay, Bolivia, and Uruguay. 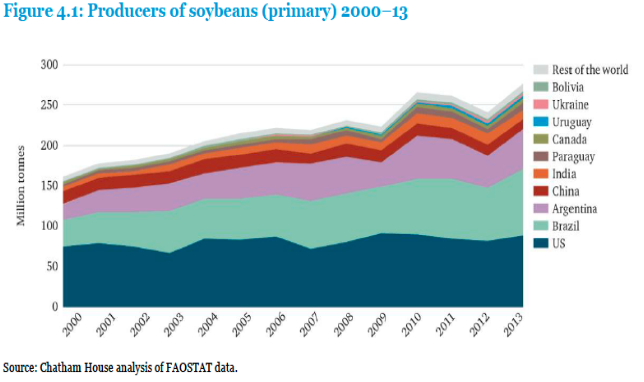 More than half of Argentina’s agricultural area is now used for the cultivation of soy, and 80 per cent of Paraguay’s – a relatively new producer.  Soybeans are the dominant oilseed on world markets, with a projected share of 60% of global oilseed production in 2014/15.

The United States, Brazil and Argentina are the world’s largest soybean producers and represent more than 80% of global soybean production. 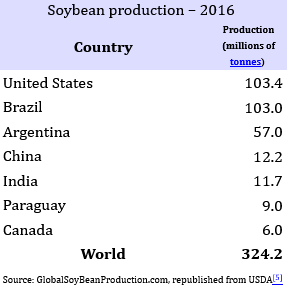 In 2014, the average worldwide yield for soybean crops was 2.6 tonnes/ha.  In 2016 1.2 million km2 of forest, savannah and grassland have been converted to soybean monocultures.

In 1994 the first GM soybean was introduced to the U.S. market, by Monsanto.  It is illegal to grow GM soy in the EU or China but it is imported for animal feed.  Russia has a GMO ban in place.  Soy is genetically modified to tolerate the Roundup herbicide.  GM Soy can be sprayed several times with this herbicide during the growing season and all other plants but the soy will be killed.  Recently more and more weeds have become resistant to this herbicide and new GM soy variations have now been developed with resistance to multiple even more toxic herbicides (like dicamba).

“Although GM soy was introduced largely with the aim of achieving higher yields, the evidence suggests that, if anything, yields have tended to be lower.” (Gurian-Sherman, D., 2009)

What countries use the most soybeans? 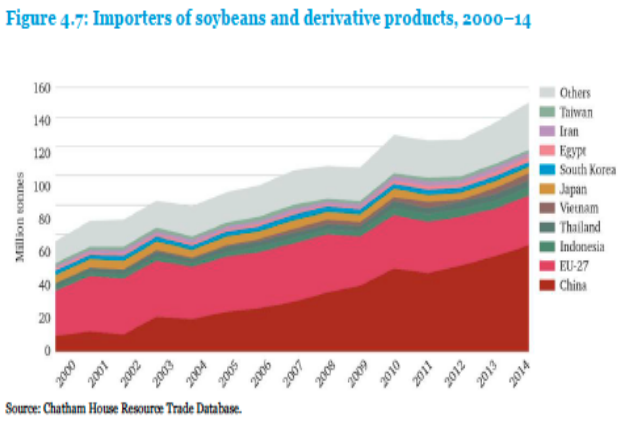 By 2016 European imports increased to 46.8 million tons of soy and soybean products, 27.8 million tons of which came from Latin America and the remainder from the US.  Assuming the average global yield of 2.6 tonnes/ha this amounts to 180,000 km2 of land appropriated from countries where people often suffer from malnourishment.

Why are soybeans so popular?

How are soybeans used?

Most people consume far more soy than they think.  While many people imagine soy is eaten mainly by vegans, meat eaters consume 94% of soy indirectly as meat and as an ingredients in food and other products.  Globally 76% of soybeans are converted to soybean meal (68%) and soy oil (8%).  Soybean meal is use primarily for poultry and pork but also for beef, dairy and factory-farmed fish combined with maize, barley or other grains.  93% of soy in Europe is used for animal feed.  9% are used as ingredients, as a cooking oil, and emulsifier in processed foods.  9% are processed into industrial products (primarily biodiesel).  Only six percent of soybeans are used directly as human food, and this is mostly in Asia where a different non GM strain is grown by millions of small farmers in India and China.

Soy ingredients have become staples in the food manufacturing industry.  Lecithin is widely used as an emulsifier.  Since the 1970s, partially hydrogenated soybean oil has been a mainstay in the production of snacks, baked goods, salad dressings and other foods, although the trans fatty acids it contains has led to its rapid fall from grace in recent years.  Soy protein ingredients can be found in baked foods, processed meats and other products.  Soy oil is consumed as edible oil although the proportion used for biodiesel production is growing rapidly, especially in the U.S.  The rest of the soy is used for industrial products such as fatty acids, soaps and biodiesel.

How fast is Soybean production growing?

China alone has accounted for over 90 per cent of the total growth in imports recorded since 2005, and in 2014 the country accounted for almost 40 per cent of total world imports.  In 2017 the Chinese Government revised its national food guidelines recommending its citizens to reduce meat consumption by 50%.  That hopefully will reduce the use of soy.  Indonesia, Mexico, Japan, Vietnam and Thailand all currently feature among the top 10 soybean meal importers, with a boom driven by increasing demand for meal as a feedstock for the aquaculture industry, as well as increased demand for animal protein by consumers.  Soy has only limited potential for yield increases, owing in part to its nature as a biological nitrogen fixer, which renders it largely unresponsive to fertilizers.  Between 1995 and 2011 aggregate soybean yields increased by just 1 per cent in the major producing countries.  So any increase in consumption will be met by expanding the land area being used to grow soy.  The WWF estimate an increase to 200 million ha by 2050 (assuming global average productivity).

What’s else is driving the growth of Soybean production?

We saw above how the increase in soy production is driven by increasing meat consumption.  From 1961-2013 poultry and pork production increased by 60 million tonnes.  Around 75 per cent of soy worldwide, and 93 per cent of soy in Europe, is used for animal feed.  The below diagram shows the explosive growth in poultry and pork consumption from 1961-2013. 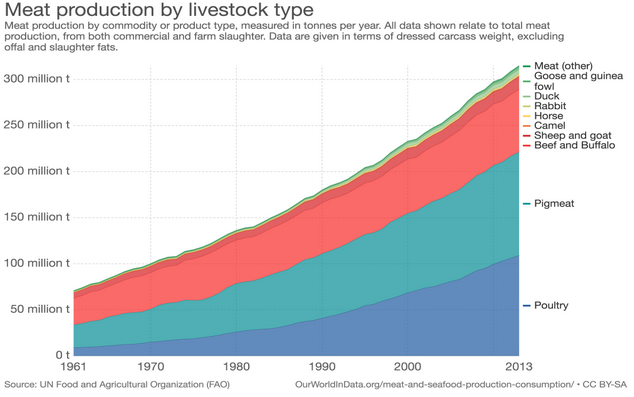 The below graph shows the growth in per capita meat consumption, showing the huge growth in poultry and also to a lesser extent pork and eggs.  Between 1967 and 2007 pork production rose by 294 per cent, egg production by 353 per cent and poultry by 711 per cent (FAO, 2011).  A global average of 10 kg of pork and poultry per person per year to 30 kg per person even as the population increased from 4 to 7.5 billion while per capita beef consumption remained relatively static.  A production increase of 185 million tonnes of meat. 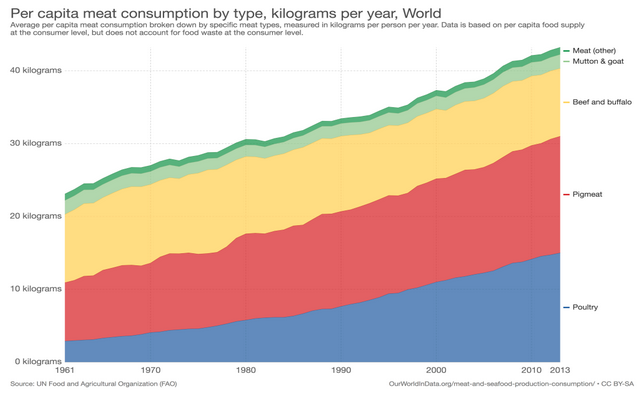 This growth in meat products is viable solely because it is propped up by massive direct subsidies for producers combined with low animal feed import tariffs.  OECD subsidies in 2012 are shown below.  If farmers producing animal products had no subsidies then most would have to shut down.

The EU intensive livestock sector relies on soy, most of it GM soy imported from South America and the US, to produce meat and dairy products.  Imports of soy to the EU appropriates an area of 180,000 Km2.  This is more than Germany’s entire agricultural area.  The main European importers of soy are countries with large industrial-scale pig and chicken production.  The average European consumes over 150kg of soy per year (assuming 93% of the imports used as feed), indirectly in the form of animal products, primarily chicken and pork, but also beef and farmed fish as well as eggs, milk, cheese and yogurt.

Other reasons for the increase in the global production of soy include: