In The Blue Zones Solution author Dan Buettner outlines how people in five different regions (which he calls ‘Blue Zones’) developed a culture and society that supported exceptional health and well-being. The following article contains some extracts from the book that show how it’s possible to create healthy cultural norms – effectively creating a preventative health care system. 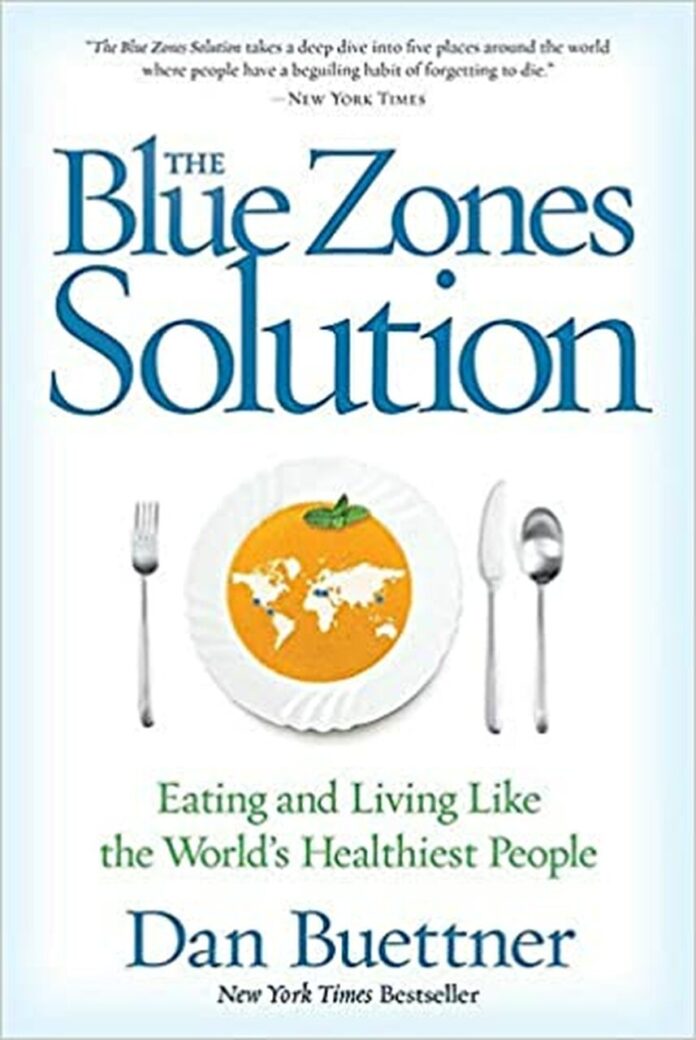 People in the Blue Zones never read labels, counted calories, or went on a diet. Yet they all managed to eat a nearly perfect whole food plant based diet without thinking about it. They lived in an environment where fresh fruits and vegetables were affordable and readily available all year round. Sodas, chips, sweets, and cheap meat products were not available or pushed by advertising. Their homes were set up in a way that made it easy to prepare plant-based foods for the table and they had time-honoured recipes and the cooking skills to make their food taste great. Their faith based organisations supported selecting, preparing, and eating the right kind of foods. Doing things that helped them maintain a healthy weight, stay connected, and keep physically active weren’t just choices – they represented a shared way of life. It turns out that whether you live a short life or a long one is more a consequence of the society and culture you belong to than the quality of your GP or local hospital.

Realising that creating healthy cultures means making changes in lifestyle and environment and not just in menus, Dan Buettner searched the medical health literature to see if any community had intentionally transitioned from unhealthy social and cultural practices to healthy ones. He found only one large-scale public health intervention success story in the North Karelia Region of Finland. Here is the story of how an innovative group of young scientists and public health workers developed a grass roots strategy that resulted in significantly improved health and well being across the population. Over thirty years these changes reduced heart disease by 80% and cancer by 60% among the 170,000 population.

In the sixties national and international surveys were being taken to assess the state of public health around the world. North Karelia, a region of farmers and lumberjacks, was found to have the highest rate of heart disease in the world.  Butter and tall glasses of milk had found their way into every meal, fried pork or meat stew was served for dinner together with butter and bread. Vegetables were considered food for animals. Although the quality of their meat and dairy products were a source of regional pride they were having a major negative impact on people’s health and life expectancy.

They knew that it is far more intelligent and cost effective to prevent disease than to cure it. Pekka Puska was appointed to lead a five year preventative health project in the region. Recent scientific findings in epidemiology had shown that the number of people who die of heart disease was directly proportional to the average blood pressure of the whole population and that for every percentage point you lowered cholesterol in a population you lowered heart disease by two points. The project was based on the understanding that the more animal products people consumed the higher their intake of fats and cholesterol and therefore the higher their rate of heart disease. So they aimed to replace animal products with healthier plant foods.

They realised that the only way to cure North Karelia of heart disease was to change the local culture.  Instead of adopting a top down approach they worked with local health care systems and community organisations to encourage people to adopt a low fat wholefood plant based diet; they set up surveys to capture people’s health information; they worked with a local women’s organisa- tion and with several clubs to spread the message; they held afternoon longevity parties where a member of Puska’s team would give a talk on the link between saturated fat and heart disease. In addition to this they gave locals a recipe book that added vegetables to traditional dishes and organised local cooking classes, which worked much better than countless leaflets.

They recruited 1,500 people (mostly women) as community ambassadors to work as opinion leaders. These opinion leaders encouraged people to replace saturated fat with fruits and vegetables and to reduce salt consumption and to give up smoking and to talk to their friends and spread the word. They spoke at churches, community centres and schools and established cooperatives to grow and process local fruits. They had two slogans “Face to face communication” and “Common interest”. You have to be honest and work with people on the same level. They also started to lobby food producers. At first the powerful dairy industry fought back taking out ads criticising the project. But this sparked a national debate on the relationship between dairy fat and heart disease.

At the end of the five year period they had reduced the heart attack rate among middle aged men by twenty five per cent. Mortality from all cancers dropped by ten per cent.  After thirty years the average life expectancy had jumped by ten years.

The key lessons that had led to the success of the North Karelia intervention include:

Focus on the Ecology of Health – Don’t talk about individual responsibility but focus on making long term changes in the local culture.

Allow different solutions to emerge for different people and places – Don’t try to impose one solution everywhere. Constantly re-evaluate and fine-tune the strategy to  improve on outcomes. Provide a menu of evidence based goals people can choose from.

Work with local health systems – people listen to their doctors and nurses.

Community Ownership – when people see they have a health problem then they are willing to change.

Bottom up and top down – the team worked with people to identify what needed to change in their diet and then worked from the top down on the food policy level to change the food culture.

Measure – the team vigilantly measured a range of population risk factors throughout the project to ensure they had solid stats to show that their strategy had worked.

In a region of dairy farms the number of people consuming high fat milk dropped from 70% to less than 10%.

In Okinawa or Sardinia centuries of cultural evolution had led to a long healthy lifestyle. But North Karelia has managed to manufacture a healthy culture that has given a ten year boost to people’s life expectancy. Seeing this Dan Buettner was convinced that you could do the same elsewhere. In the next issue of Vegan Sustainability we will outline how these programs were introduced in the US.

For more information, check out the Blue Zone’s website.

This article should obviously not be taken as medical advice and you should undertake...

The UN has declared 2016 the International Year of Pulses. What’s so special about...

People often ask me about the best way to detoxify.  Am I a fan of...
Previous articleForks over Knives (movie review)
Next articleViolent Practices protected as ‘Culture’ in Brazil