The Blue Zones Solution: Eating and living like the world’s healthiest people

Highlights of some of the main points from the book by Dan Buettner. 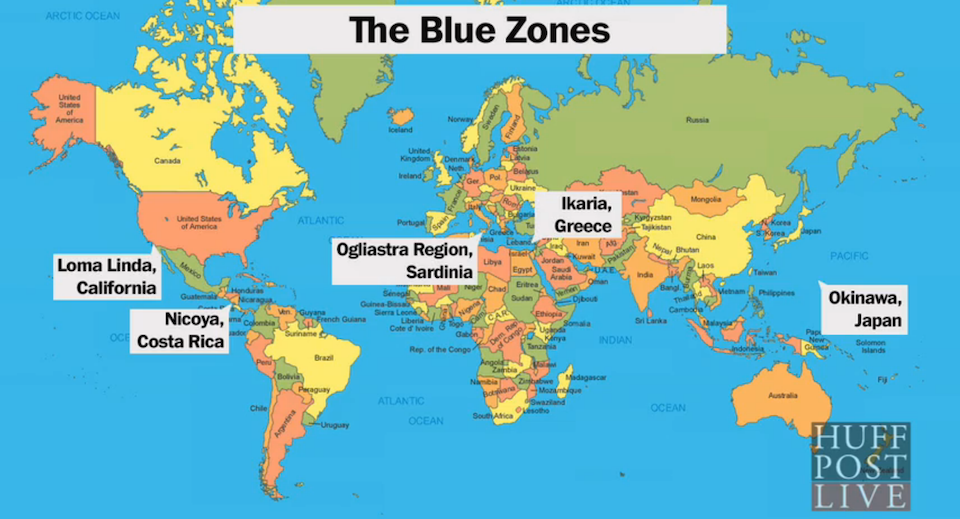 Within a single country or even a single city or town, indicators of health vary substantially even within the same ethnic group.  It’s not that people’s genes vary substantially but the society, culture and services available differ from place to place.  The daily choices that bring us health or illness are influenced by the speed of the traffic where we live, the quantity of advertising we see, our social circle, etc.  Health is not only an individual matter – it is strongly dependent on the cultural beliefs and social practices where we live.  Our environment influences our choices and will support or undermine our well-being.

Journalist, author, health activist, and National Geographic fellow Dan Buettner spent over ten years identifying extraordinary places around the world that he called ‘Blue Zones’ – where people live long, healthy lives all the way to 100 with significantly lower rates of heart disease, obesity, cancer, and diabetes.  The five regions are:

Over ten years a team, including medical researchers, anthropologists, dieticians, demographers, and epidemiologists, identified a core list of lifestyle practices and environmental factors shared among the people living in these different Blue Zones.  These practices can be grouped in four inter-related areas: Outlook, Belonging, Activity, and Food.

I edited Dan Buettner’s list of nine points for health and deleted one point about cultures having small amounts of alcohol.  This is because one of the groups doesn’t take alcohol at all.  But more importantly it is possible that the benefits come from the socialising and not the alcohol.  In Ireland 2,000 hospital beds are occupied every night because of alcohol and 20% of the HSE budget goes on treating illnesses caused by alcohol consumption.  Averaging the consumption of alcohol over the number of drinkers in Ireland means we consume the equivalent of a litre of vodka (40% alcohol by volume) every week.  Finally, any consumption of alcohol is a risk factor for cancer.  So this Christmas keep your mind clear and happy and choose healthy alcohol free alternatives:

In some of these places (like Okinawa) modernisation has brought changes in lifestyle and increased consumption of meat, dairy, sugar, fried foods, and salt.  Consequently the typical western diseases of heart disease, cancer, diabetes, and obesity have grown rapidly and life expectancy has declined.

The Blue Zones solution shows that the healthiest cultures on the planet evolved to live on a 95% whole food plant based diet.  Today we have access to an even wider variety of whole plant based foods.  We know that a vegan diet provides all the nutrients we need except for B12 and since we wish to live ethically and to contribute to a peaceful world for all living beings a fully vegan lifestyle is the happy, peaceful and intelligent choice.

The book The Blue Zones Solution can be found in book stores or online.

You can find more information on the Blue Zones website here including a questionnaire that estimates your life expectancy.

A variety of grains, legumes, and vegetables can provide all of the essential amino...

Being a Raw Vegan in Ireland

I have read many discussions on whether our bodies evolved to be vegan or...
Previous articleMy Veganic Gardening
Next articleAgriculture: The Other Inconvenient Truth