Cultured or ‘in vitro’ meat is a controversial subject among vegans.  Bronwyn Slater lays out the facts about the process and finds that it may be possible in future to remove animals from the equation altogether.

While veganism is a popular and growing movement and the number of vegans has been on the rise for the past few years, most people unfortunately still continue to eat meat.  Meanwhile, the global population is increasing and meat and dairy consumption is growing along with it.  Many people, despite being aware of the suffering of animals on factory farms as well as the environmental degradation associated with meat, still won’t give it up as it is too central to their lives.  Cultured meat has been hailed as the solution – satisfying people’s desire to eat meat without requiring the rearing and slaughter of animals.  As outlined below, the process does (in some cases) require the slaughter of animals, but new methods are also being found to produce cultured meat without animal use. 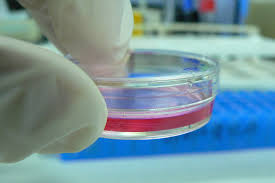 How is it cultured beef created?

First, stem cells are taken from a cow’s muscle during a biopsy – described as ‘a harmless process’.

The second stage is far more distressing.  A pregnant cow is slaughtered and the live foetus has a needle inserted into its heart.  The foetus is then bled to death – a process which takes around 5 minutes.  The blood from the foetus is collected and processed to produce ‘foetal bovine serum’ or FBS.  This serum is used in the cultivation of in vitro meat due to its unique ability to promote the growth, proliferation and cultivation of cells.

There are plans to make the process less dependent on animals using ‘immortal cell lines’ and a plant-based growth medium instead of FBS (see below).

Currently, lab-grown beef can only be produced in small pieces to make ground meat like hamburgers.  To grow something like a steak an edible ‘scaffold’ would be needed.  This is something researchers are still working on.

To produce cultured duck and chicken meat, cells are taken from a duck or a chicken – apparently even a feather will do.  Memphis Meats, a San Francisco-based company who are currently producing cultured meat, say that they have developed lab-grown edible chicken and duck from the stem cells of live animals, saying that ‘no harm was done to the birds’.  The cells they used are self-renewing such that they will divide and grow indefinitely.  They did not reveal, however, the nature of the scaffolding they used to grow the meat.

It is possible to continue producing meat indefinitely without requiring new cells from a living organism.  This involves the establishment of starter cell lines.  These are long-lasting lines called “immortal cell lines” – the idea being that they would multiply in perpetuity.  This means that animals would no longer be needed for the extraction of stem cells (as in stage 1 above).

Scientists at North Carolina State University recently figured out how to create immortal cell lines for turkeys.  In addition, clean-meat scientists at food-tech companies say they’ve made immortal cell lines for other farm animals including chicken, duck and pork.  A study published in the journal Scientific Reports describes research designed to generate muscle from a newly established pig stem-cell line, rather than from primary cells taken directly from a pig.

To avoid the need for FBS (as in Stage 2 above) the use of algae and bacteria has been proposed to produce the main ingredients for the culture media.  Memphis Meats claim they have been able to remove FBS from their process, but won’t give details about what they replaced it with.  Hampton Creek is also attempting to create cultured meat that relies on a plant-based growth medium, and other companies are attempting to do the same.  Pork has been successfully made without foetal serum.

If and when the production of cultured meat becomes large-scale, companies will be forced to find alternatives to foetal serum as it will no longer be practical to use.  A plant-based growth medium would be less expensive when it comes to large-scale production.

30 laboratories from around the world have announced that they are working on cultured meat research.  Both Bill Gates and Richard Branson have invested in Memphis meats, as have Tyson Foods and Cargill – the largest meat companies in the US.

US company Wild Type wants to develop a slaughter-free alternative to salmon.  The company aims to produce salmon grown from stem cells to be used in both sushi and lox dishes.

Josh Tetrick of Hampton Creek (now called ‘Just Inc.’) says that some cultured meat products such as chicken nuggets, sausage and foie gras will be available in restaurants in the US and Asia by the end of 2018.  Hamburgers will be priced at around $11 initially – far too expensive for most people – so these products will only supplant conventional meat when they become cheaper.

One hurdle that cultured meat will have to overcome is what is commonly referred to as the ‘yuck factor’.  People may have an aversion to eating anything that comes from a laboratory.  The term ‘Frankenfood’ has been coined to describe these types of products.

Also, let’s not forget that there is now a large and growing number of plant-based meat analogues or ‘fake meats’ on the market which look and taste similar to the real thing.  For example, Beyond Meat’s plant-based ‘Beyond Burger’ recently outsold meat in a leading supermarket in the US.  If researchers concentrated on improving plant-based alternatives there would be no need to go down the cultured meat route.

In vitro meat is likely to be an expensive item for quite some time.  Plant-based vegan products, on the other hand, are already readily available and need not be expensive.

In vitro meat could also continue to create a demand and a taste for meat on into the future.  Do we really want to perpetuate the meat-eating trend with our kids?  The fact is that meat is an unnecessary and unhealthy part of the human diet.  A vegan diet is far healthier, more natural and more sustainable.

While people are being told to cut back on meat, dairy, and eggs, worldwide consumption is going up.  Consumption of factory-farmed animals is at an all-time high and set to soar far higher for decades to come.  9 billion human beings cannot possibly go on eating meat produced in the traditional way – the planet simply cannot support it.

Research has suggested that the environmental impacts of cultured meat would be significantly lower than those for normally reared and slaughtered animals.  A study by researchers at Oxford and the University of Amsterdam found that cultured meat was “potentially much more efficient and environmentally-friendly, generating only 4% of greenhouse gas emissions, reducing the energy needs of meat generation by up to 45%, and requiring only 2% of the land that the global meat/livestock industry does”.

Despite the much talked about ‘yuck factor’, a 2017 survey showed that nearly a third of people would be willing to eat clean meat regularly or as a replacement for traditional farmed meat.

PETA fully supports the idea of cultured meat, saying that it has the potential to alleviate the slaughter and suffering of billions of animals.  While no animal advocacy organisation has actually denounced cultured meat, most say that it is simply a distraction from veganism and that a plant-based diet is the better solution in any case.

The removal of FBS from the process would be a great step forward in terms of animal welfare as it would remove slaughter from the equation altogether, and this, together with the establishment of immortal stem cell lines, would remove animals from the process completely.  Both of these can be done now according to the companies involved.  For some vegans, this might be sufficient to make the process satisfactory from an animal welfare point of view, while for other vegans, the fact that the cells originated at one time from a living animal would make the process unacceptable.

What do you think?  You can have your say in the comments below.

The Gruesome Truth about Lab-Grown Meat

What are the benefits of cultured meat? – by Bruce Friedrich

Clean Meat: How Growing Meat without animals will revolutionize dinner and the world – by Paul Shapiro