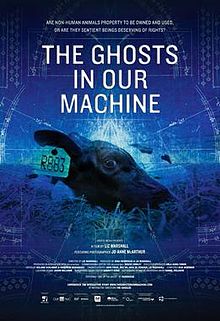 The Ghosts in Our Machine is one of the most striking films I have ever seen and just might be my new favourite documentary. In the film, director Liz Marshall follows photographer Jo-Ann McArthur as she documents exploited animals around the globe. Unlike many other animal rights films, such as Earthlings, the emphasis is not on presenting graphic content; the viewer is drawn in to serve as a witness to the caged foxes waiting to be turned into fur; pigs waiting to have their throats slit in a slaughterhouse; and animals around the globe being treated as property. Ghosts, presented through McArthur’s eyes, offers a beautifully disturbing, yet often subtle, portrayal of animal exploitation.

Marshall combines the trauma of these animals with McArthur’s own anguish, bearing witness to their suffering:

‘Leaving is the reason that I’m haunted.’ Yet the film avoids overwhelming viewers by juxtaposing the misery of captive animals with McArthur’s time spent at an animal sanctuary, which she describes as her own form of therapy. What the film lacks in facts and analysis it more than made up for in the striking images McArthur manages to capture and the visceral connection created between viewer and subject.

The film is currently streaming on Netflix and can be purchased from their website, which also features some of McArthur’s most iconic images and a beautiful interactive version of the story.