The EAT Lancet Comission Report, published in 2019, describes how industrial agriculture is devastating the environment, as forests are destroyed and billions of cattle emit climate-warming methane. 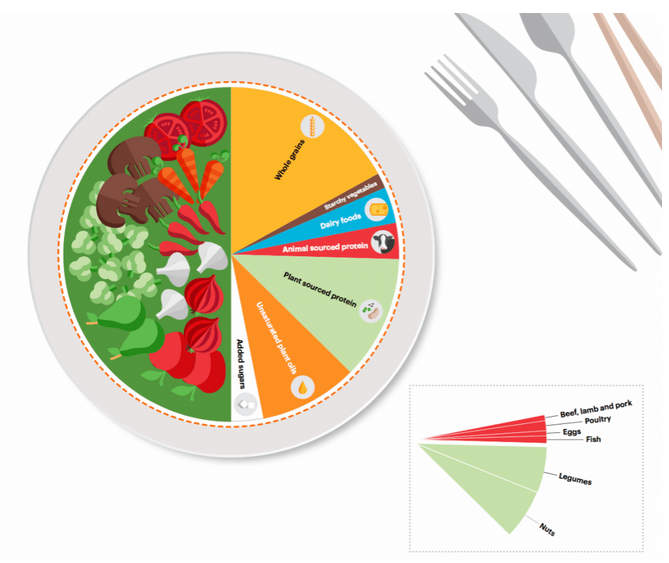 Prof Johan Rockström, one of the report’s lead authors states: “Humanity now poses a threat to the stability of the planet.  Global food production threatens climate stability and ecosystem resilience.  It constitutes the single largest driver of environmental degradation and transgression of planetary boundaries.  Taken together the outcome is dire.  A radical transformation of the global food system is urgently needed.  Without action, the world risks failing to meet the UN Sustainable Development Goals and the Paris Agreement.”

According to the report: “Interacting biogeophysical systems and processes in the Earth system, in particular between the climate system and the biosphere, regulate the state of the planet.  The Commission focuses on six of these, (shown below), which are the main systems and processes affected by food production and for which scientific evidence allows the provision of quantifiable targets.

These systems and processes are being increasingly recognized as necessary parameters for a system-wide definition of sustainable food production.  For each of these, the Commission proposes boundaries that global food production should stay within to decrease the risk of irreversible and potentially catastrophic shifts in the Earth system.  These planetary boundaries for food production conceptually define the upper limit of environmental effects for food production at the global scale.”

The report outlines how “unhealthy diets are the leading cause of ill health worldwide, with 800 million people currently hungry, 2 billion malnourished and a further 2 billion people overweight or obese”.  “The analysis shows that staying within the environmental safe operating space for food systems requires a combination of substantial shifts toward mostly plant-based dietary patterns, dramatic reductions in food losses and waste, and major improvements in food production practices.“  The transformation to healthy diets will require substantial dietary shifts which are presented in the Planetary Health Plate.

“A planetary health plate should consist by volume of approximately half a plate of vegetables and fruits; the other half, displayed by contribution to calories, should consist of primarily whole grains, plant protein sources, unsaturated plant oils, and (optionally) modest amounts of animal sources of protein.”  – EAT Lancet Commission Report, 2019.

The planetary health plate states that animal products have to be minimised or eliminated completely. Globally, these dietary recommendations require red meat and sugar consumption to be cut by half, while vegetables, fruit, pulses and nuts must double.  North Americans need to eat 84% less red meat but six times more beans and lentils.  Europeans should eat 77% less red meat and 15 times more nuts and seeds.  The report does not advocate a vegan diet but clearly the more plant based a diet is the more ecologically sustainable it becomes.  The report says the data are both sufficient and strong enough to warrant immediate action.  “Delaying action will only increase the likelihood of serious, even disastrous, consequences.”  The impacts of these changes are enormous.  The Commission analyzed the potential impacts of dietary change on diet-related disease mortality and concluded that dietary changes from current diets toward healthy diets are likely to result in major health benefits.  This includes preventing approximately 11 million deaths per year, which represent between 19% and 24% of total deaths among adults.