At Vegan Sustainability we recognise that the Living Planet Report (LPR 2018) produced by the World Wide Fund for Nature (WWF) is the most important assessment of global biodiversity.  However, having reviewed the projects that the WWF undertakes we still find that they are unable to advocate for the solution of veganism which is capable of reducing our agricultural footprint by 75% and still feeding the world.  This article is a selection of extracts from the full report.

The Living Planet Index (LPI) is a population biodiversity indicator.  It tracks the state of global biodiversity by measuring the population abundance of thousands of vertebrate species globally.  The latest index shows an overall decline of 60% in population sizes between 1970 and 2014.  Species population declines are the highest in the tropics, with South and Central America suffering the most dramatic decline, an 89% loss compared to 1970.  Freshwater species numbers have also declined dramatically, with the Freshwater Index showing an 83% decline since 1970.

The index starts at a value of 1.  If the LPI and confidence limits move away from this baseline, we can say there has been an increase (above 1) or decline (below 1) compared to 1970.  These values represent the average change in population abundance – based on the relative change and not the absolute change – in population sizes.  The shaded areas show 95% confidence limits.  These illustrate how certain we are about the trend in any given year relative to 1970.

Average abundance of 16,704 populations representing 4,005 species monitored across the globe declined by 60%.  The white line shows the index values and the shaded areas represent the statistical certainty surrounding the trend (range: -50% to -67%).

Freshwater ecosystems provide habitat for at least 126,000, or around 1 in 10, known species of fishes, molluscs, reptiles, insects, plants and mammals despite covering less than 1% of the Earth’s surface.  These ecosystems are also the most threatened – they are strongly affected by habitat modification, fragmentation and destruction; invasive species; overfishing; pollution; forestry practices; disease; and climate change.  In many cases, these combined threats have led to catastrophic declines in freshwater biodiversity.

The 3,358 populations – representing 880 species of mammals, birds, amphibians, reptiles and fishes – in the Freshwater LPI show an 83% decline, equivalent to 4% per year since 1970.  The largest declines are seen in populations in the Neotropics (-94%), the Indo-Pacific (-82%) and the Afrotropics (-75%), especially in reptiles and amphibians, and in fishes. 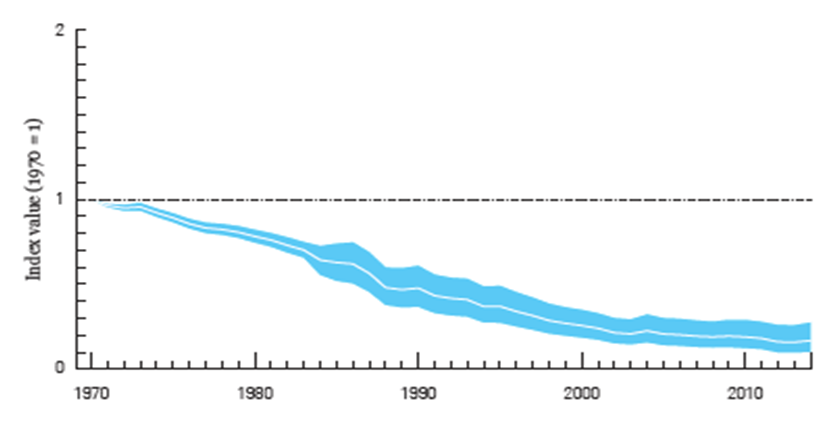 In a recent paper, researchers writing in the journal Nature analysed the most prevalent threats facing more than 8,500 threatened or near-threatened species on the IUCN Red List.  They found that the key drivers of biodiversity decline remain agriculture and overexploitation.  Indeed, of all the plant, amphibian, reptile, bird and mammal species that have gone extinct since AD 1500, 75% were harmed by agricultural activity or overexploitation or both…. according to the IUCN Red List data, whatever the threat category or the species group, agriculture and overexploitation (fishing and hunting) are the ‘big killers’ with the greatest current impact on biodiversity.

Information about threats is available for just over a quarter of all species records in the global LPI – 3,789 populations.  These threats are grouped under five major categories: habitat degradation and loss (agriculture and deforestation), overexploitation (fishing and hunting), invasive species and disease, pollution, and climate change.

The most commonly reported threat category across all LPI populations is habitat degradation and loss.  This accounts for nearly half of all threats within each taxonomic group (45% to 49%) except fish (28%).  The second most commonly reported threat is overexploitation.  At the lower end, it accounts for 17% of threats to bird populations and – at the high end – 55% of threats to fish populations.  Together, habitat loss and degradation plus species overexploitation account for at least two-thirds of all threats recorded for populations within each taxonomic group.

Invasive species and disease are reported most frequently as threats for reptiles and amphibians, and mammals (12% and 9%).  Pollution shows up more for birds (10%) and for amphibians and reptiles (5%) than for the other taxonomic groups.  Within the LPI, climate change was most commonly reported as a threat for bird and fish populations – at 12% and 8% respectively and less frequently for other groups.

This refers to the modification of the environment where a species lives, by complete removal, fragmentation or reduction in quality of key habitat.  Common causes are unsustainable agriculture, logging, transportation, residential or commercial development, energy production and mining.  For freshwater habitats, fragmentation of rivers and streams and abstraction of water are common threats.  Agriculture covers 53% of the biologically productive land area and animal agriculture occupies 83% of this land.

There are both direct and indirect forms of overexploitation.  Direct overexploitation refers to unsustainable fishing, hunting and poaching or harvesting, whether for subsistence or for trade. (Fisheries provide just 2% of the global calorific intake and are not sustainable – the majority of fish are caught by industrialised countries).

Pollution can directly affect a species by making the environment unsuitable for its survival (this is what happens, for example, in the case of an oil spill).  It can also affect a species indirectly, by affecting food availability or reproductive performance, thus reducing population numbers over time.  Excessive use of synthetic agricultural inputs – including pesticides, antibiotics, hormones and fertilizers – often accompanies agricultural land use.  Pesticide use is a well-documented threat to birdlife.  It is also associated with declines in soil and aquatic biodiversity.

Invasive species can compete with native species for space, food and other resources, can turn out to be a predator for native species, or spread diseases that were not previously present in the environment.  Humans also transport new diseases from one area of the globe to another.

As temperatures change, some species will need to adapt by shifting their range to track suitable climate.  The effects of climate change on species are often indirect.  Changes in temperature can confound the signals that trigger seasonal events such as migration and reproduction, causing these events to happen at the wrong time (for example, misaligning reproduction and the period of greater food availability in a specific habitat).

As seen in the map below, populations are in decline in all realms, but declines are especially pronounced in the three tropical realms.  Here, average vertebrate abundance in 2014 was less than half of what it was in 1970.  (The main reason for this is that the species populations had already been eliminated in Eur-Asia and North America by 1970 which is the start date of this report).  The LPI indicates that the Neotropical realm, covering South and Central America, and the Caribbean, has suffered the most dramatic decline at 89% loss compared to 1970.  Nearctic and Palearctic populations are faring slightly better with declines of 23% and 31%. 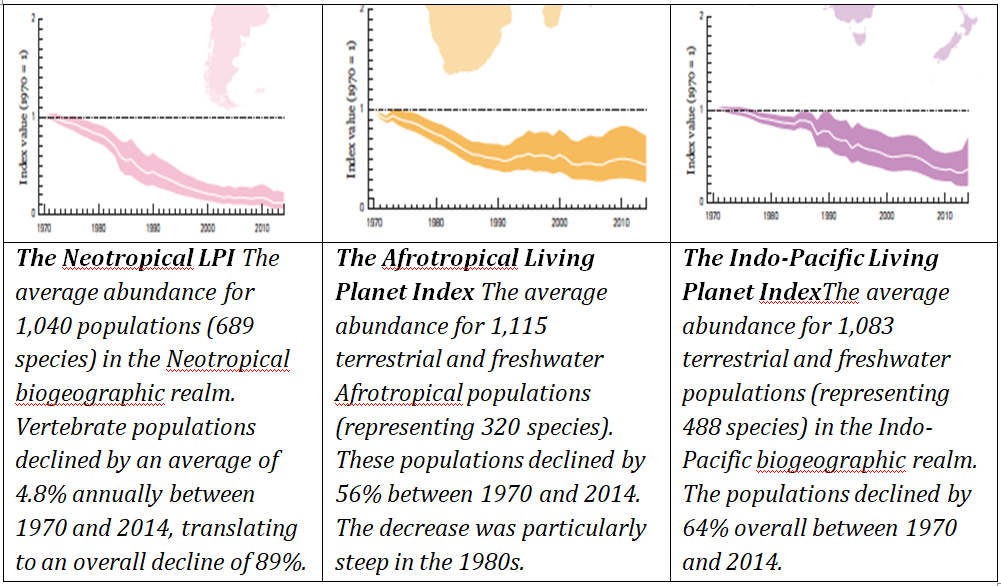 “We are sleepwalking towards the edge of a cliff” said Mike Barrett, executive director of science and conservation at WWF.  “If there was a 60% decline in the human population, that would be equivalent to emptying North America, South America, Africa, Europe, China and Oceania.  That is the scale of what we have done.”  Other recent analyses have revealed that humankind has destroyed 83% of all mammals and half of plants since the dawn of civilisation and that, even if the destruction were to end now, it would take 5-7 million years for the natural world to recover.  Tanya Steele, chief executive at WWF, said: “We are the first generation to know we are destroying our planet and the last one that can do anything about it.”

This article is part of the Creative Commons and is free to reproduce elsewhere.