The Problem with Palm Oil

Palm oil is a major driver of deforestation worldwide, destroying the habitat of already endangered species like the Orangutan, pygmy elephant and Sumatran rhino. It has been estimated that the equivalent of 300 football fields of tropical rainforest is being cleared every hour, much of it for palm oil production. 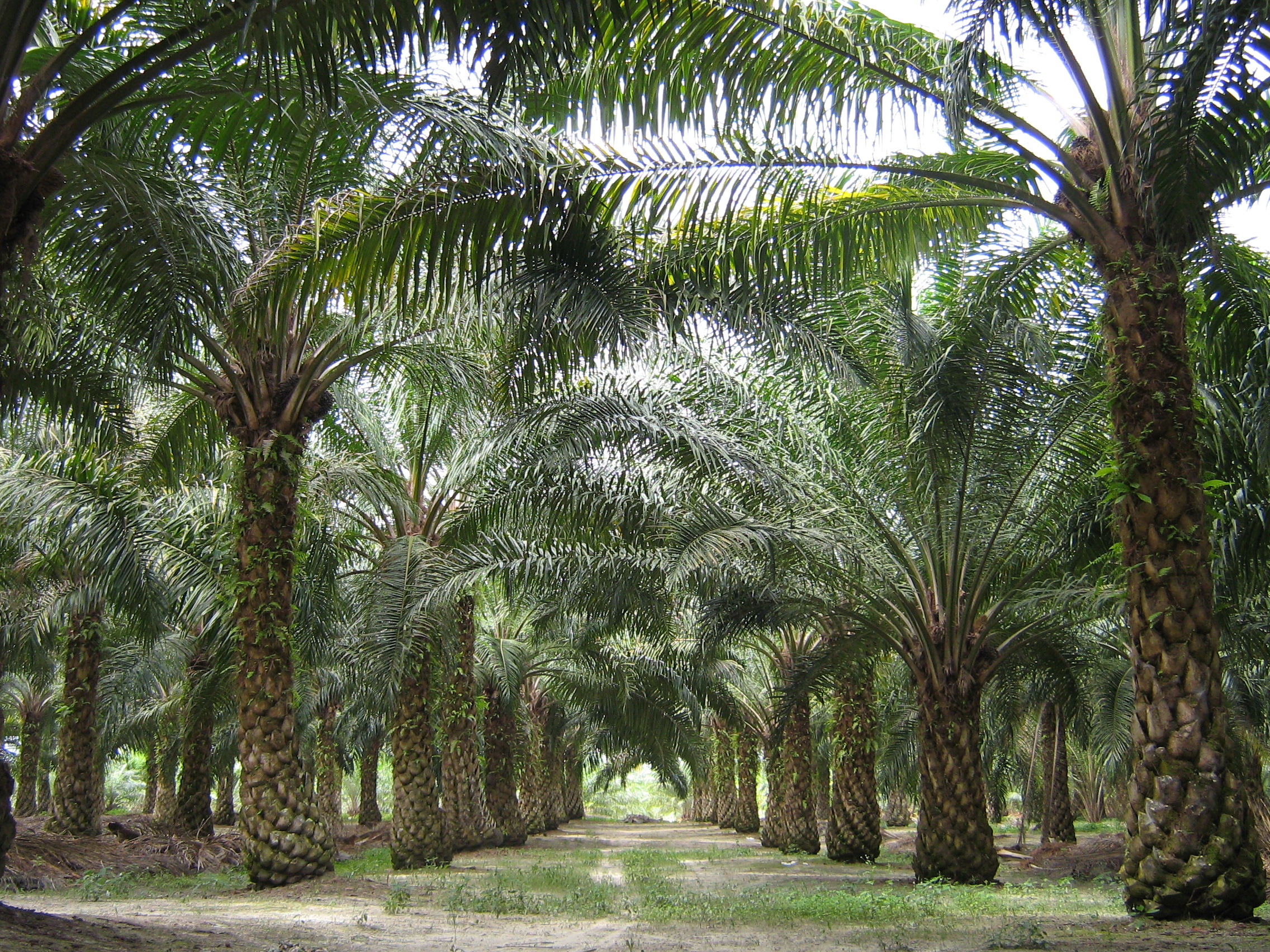 What is palm oil?

Palm oil is a vegetable oil produced from the fruits of the oil palm tree.  There are a few related species of tree but most of the oil generated comes from the African oil palm.  These trees produce a lot of plum-sized fruit from which the fleshy part gives palm oil.  The kernel is also processed into palm kernel oil.

Why is palm oil in everything?

Over half of all products on supermarket shelves contain palm oil.  These include (mainly but not exclusively) processed foods such as cookies, ice cream, pizza dough, margarine, instant noodles, bread, soap, detergent, shampoo, lipstick and a host of other products.  It can also be used as a biofuel.  To make things even more complicated, palm oil is often listed under other names like Sodium Lauryl Sulphate, Glyceryl, Vegetable Oil and many more.  The EU now legally requires it be labelled clearly in food products but not in items like soap or shampoo.

While only 5-10% of the total farmland dedicated to growing oil crops is under palm cultivation, it produces 35% of the world’s vegetable oils.  That’s because Palm is by far the most efficient generator of oil.  Other crops like soy, rapeseed and sunflower need up to 9 times more land to produce the same quantity of oil.  This makes palm oil the cheapest vegetable oil available.

Clearly, being the cheapest option would be enough to encourage companies to use palm oil, but there is more to its ubiquitousness.  In recent years much attention has been focussed on health concerns related to trans fats.  Those are fats which are created by processing vegetable fats at high temperatures to create fats more suitable for processed foods.  It is now agreed that these fats are a major factor in coronary heart disease and under pressure from health authorities in many countries food companies have sought to reduce or eliminate trans fat in favour of alternatives.  Because of its properties, including being a solid at room temperature, palm oil has become the ingredient of choice.  It is not necessarily healthy as it still contains a lot of saturated fat, but it is healthier than the alternatives and allows companies to proclaim “no hydrogenated/trans fats”.

Palm oil has been dubbed the miracle crop by many as it provides opportunities and employment, helping to lift people in rural populations out of poverty.  The oil palm only grows in a tropical climate and 90% of the total global production comes from Indonesia and Malaysia.  In Indonesia the palm oil sector contributes around 4.5% of GDP.  With a 70 billion dollar a year market growing by 7% every year there is a huge incentive to satisfy the demand.  Production has doubled over the last decade and is expected to double again by 2050.

The result has been massive deforestation and draining of peatlands to create huge plantations.  It has been estimated that the equivalent of 300 football fields of tropical rainforest is being cleared every hour, much of it for palm oil production.  While this has created employment, most would question the costs and indeed the benefits.

The peatlands/rainforests have acted as a carbon sink and their destruction is now releasing the carbon back into the environment contributing to global warming.  It’s estimated that 10% of manmade CO2 emissions come from tropical deforestation.

Malaysia and Indonesia have made commitments as part of the Paris climate change talks to work towards reducing deforestation, with Malaysia stating that it will retain 50% of its land as forest and not allow logging in defined forest reserves.  However, concern has been raised that this still means further deforestation, and there is doubt about whether the government can enforce restrictions.

In some cases land has been seized from indigenous peoples and palm oil growers have been accused of using forced labour.  The forests that are being razed host an enormous level of biodiversity with many animal species losing their habitats and some getting closer to extinction.  Tigers, rhinos and elephants have all been put at risk.

In particular there is concern about the Orangutan.  80% of their habitat has been destroyed in the last 20 years and they are on the critically endangered list.  25 orangutans are lost every day.  Nearly 150,000 orangutans from the island of Borneo have disappeared in just 16 years.

Palm oil as a fuel

Despite all the efforts by food and cosmetics consumer brands not to use unsustainable palm oil, drivers in Europe are forced (most of the time without their knowledge) to fill up their diesel cars with palm oil biodiesel.  More than half of all imported palm oil is used to make biodiesel for European cars and trucks.

Since the introduction of an EU law to promote biofuels in 2009, palm oil used to make biofuel has steadily increased from 825,000 tonnes in 2008 to 3.9 million tonnes in 2017.  The use of palm oil for biodiesel dwarfs palm oil use in other products such as cookies, chocolate spreads, shampoo or lipsticks.  In the EU, and in other countries, biofuel is the largest user of palm oil.  However, due to pressure from environmental groups this is now being phased out.

Palm oil alone is not the main driver of deforestation worldwide.  The World Resources Institute estimates that four commodities drive about half of the world’s tropical deforestation.  These are palm oil, beef, soy, and paper.  The other half is due to things like timber production and illegal land use.  Palm oil comprises about 0.4 per cent of the world’s total area under agriculture.  To put it in context, palm oil production accounts for just one tenth of the global deforestation caused by livestock and beef production, and one sixth of that caused by soybeans.  Most oil seeds are pressed for oil (about 30-40% by weight for different crops).  The remaining oil seed cake is usually used for preparing concentrates for animal feed.

The palm oil industry itself, fearful of increasingly bad press, created the RSPO, Roundtable on Sustainable Palm Oil in 2004 to define and promote CSPO, Certified Sustainable Palm Oil.  While this is a step in the right direction, there have been serious issues with compliance and transparency.  Some commentators have accused the RSPO of greenwashing palm oil producers involved in rainforest destruction.  Greenpeace said “neither governments nor the main industry body (RSPO) can currently be relied on to prevent producers from engaging in deforestation or clearing peatland”.

The preferred approach for most organisations is to push for more stringent and transparent certification.  Rather than rely on RSPO, Greenpeace for example is pushing the producers of palm oil products to publish a complete list of producers and processors and then to ensure that all related companies and groups supplying them are sustainable.

Currently around 20% of palm oil is certified as sustainable.  Sustainable palm oil means that:

There is research ongoing to replicate the properties of palm oil with more advanced hydrogenated fats or other oils, but for the near future it seems the demand for palm oil will continue.  Any attempts to ban or boycott palm oil could trigger unintended consequences.  A report by IUCN (International Union for the Conservation of Nature) suggested that a switch from palm to soy for example would lead to increased deforestation in South America.  Iceland Supermarket’s recent move to ban palm oil products could be potentially dangerous because boycotting it may put pressure on other crops that are just as responsible for the world’s environmental problems, if not more so.

What can you do?

Trying to exclude products containing palm oil is going to be difficult since it’s hidden in so many consumer items, however you can reduce your dependence on processed foods.  That will be good for your health and will inevitably reduce your palm oil usage.  On page 41 of Greenpeace’s excellent report Moment of Truth, they list the 16 largest users of palm oil and their responses to Greenpeace’s challenge.  Companies like these are sensitive to public opinion if they think it may threaten profits, so sharing your concerns and avoiding their products (if they are not making progress) can be effective.  Also talk to your friends and family about the issue so that it remains in the public’s eye.  Raise it with politicians if possible as that may be an avenue to better labelling for properly sustainable palm oil.

John McDonnell is an IT Professional based in Cork, Ireland.  He has a keen interest in environmental and sustainability issues.

Rainforest Action Network – campaigns on behalf of Orangutans and practices that destroy the rainforests: https://www.ran.org/?fbclid=IwAR1_AdvzHx71Hkeq5OwLCdPn_FRolo84YiN0JlQK9OLAri83XQJtroUopec

Say ‘No’ to Palm Oil:
http://www.saynotopalmoil.com/index

There are annual burns in Brazil during the dry season.  While some may be...
Previous article101 Million Animals are Killed in Ireland Every Year
Next articleIPCC’s Special Report on the Impact of Global Warming of 1.5°C