The Story of Soy

This article is based on reports and websites listed here.

In 2016 global production of soybeans was 324 million tonnes on 1.2 million Km2, a 5% increase from 2014 and more than three times the size of Germany.  The United States, Brazil and Argentina are the world’s largest soybean producers and represent more than 80% of global soybean production.  More than half of Argentina’s agricultural area is now used for the cultivation of soy, and 80 per cent of Paraguay’s, a relatively new soy producer.  This reduces the food available for locals for the sake of cash crops for EU and Chinese meat consumption.  Soybeans are the dominant oilseed on world markets, with a projected share of 60% of global oilseed production in 2014/15.  In 2014, 90.7 million hectares of GM soy were planted worldwide, 82% of the total soy cultivation area.

China is by far the largest importer of soybeans (61% of total imports, or 55 million tons on 210,000 km2) and the country is expected to increase its soy imports by 5% annually increasing 50% by 2020/21 to reach 110 million metric tons of soybean imports.  By 2016 European imports increased to 46.8 million tons of soy and soybean products, 27.8 million tons of which came from Latin America and the remainder from the US.  Assuming the average global yield of 2.6 tonnes/ha this amounts to 390,000 km2 of land appropriated for Chinese and European meat from countries where people often suffer from malnourishment.

While many people mistakenly believe that soy is eaten by vegans and vegetarians, meat eaters actually consume 85% of soy – mostly indirectly as meat but also as an ingredient in processed food and as a cooking oil.  The below diagram summarises the global uses of soybeans. 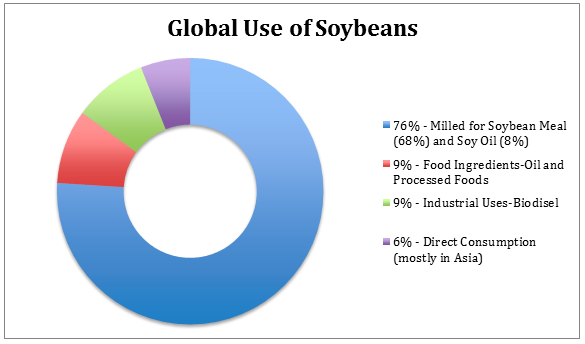 In 2016 1.2 million km2 of forest, savannah and grassland were converted to soybean monocultures.

Soybean meal is used primarily for poultry and pork but also for beef, dairy and factory-farmed fish.  It is usually combined with maize, barley or other grains.  According to the International Feed Industry Federation, globally in 2016 approx. 1.3 billion tons of feed-grain, 242 million tons of soybean meal and approx. 160 million tons of other oil seed meal was used for animal feeds.  In addition, an astonishing 2.3 billion tons of grass and alfalfa and a further 1.1 billion tons of other crops (legumes, turnips, kale, etc.) and stovers (the leaves and stalks of field crops) are consumed by farm animals.  But from all these inputs globally animal agriculture produced just 310 million tons of meat (2016), 789 million tonnes of milk (2014) and 70 million tonnes of eggs (2014).  If we just consider the calories lost from grain and soya beans, animal agriculture manages to convert enough healthy food for 7.5 billion people into enough unhealthy food for 1.5 billion people by first feeding it to animals. 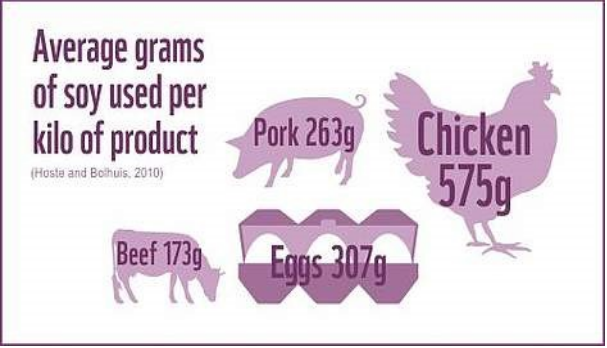 93% of soy imports to Europe are used for animal feed and the remainder is used for biodiesel.

In 2016 The US, Brazil, Argentina and Paraguay produced 85% of the world’s soy.  Growing soybeans often means evicting indigenous people and destroying large areas of natural habitat, packed with biodiversity, to make way for massive agricultural land.  In all of these countries soybean cultivation has taken place at the expense of indigenous people, natural grasslands, and forests.  Biodiversity is in decline in tropical regions.  According to WWF’s Living Planet Index species populations in tropical regions have fallen by an average of 60 per cent since 1970.

In the United States between 2006 and 2008, the area on which corn and soybean was harvested increased by more than 3.2 million ha; nearly one-third of this increase came from converting grass-dominated land.  In South America from 2001-2010, an average of approximately four million hectares of forests were destroyed each year (400,000 km2), mostly for soy and beef production. This has impacted a range of precious ecosystems including the Amazon rainforest, the Cerrado, the Atlantic Forest, the Gran Chaco, and the Chinquitano in Brazil, Argentina, Paraguay and Bolivia, from diverse native ecosystems into soy monocultures.  You can read a detailed description of the impacts on these precious biomes in this Vegan Sustainability Report.

The Human Impact of Soybean Production

Along with the loss of biodiversity and natural ecosystems, soy production causes a number of other environmental and social problems.  The Brazilian Amazon and the Cerrado combined are home to an estimated 60 million indigenous people over four countries.

Opening up new agricultural land to grow soybeans has often led to violent, sometimes fatal, conflicts with local communities and indigenous people.   A study in Argentina’s Chaco region documented 224 land conflicts, including a number related to soy, affecting 127,886 people on more than 2.7 million ha: one quarter of the families were evicted. 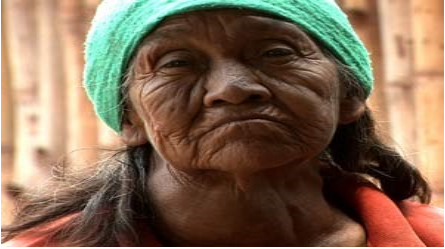 In Brazil, soybean cultivation displaces 11 agricultural workers for each one who finds employment in the sector.  In the 1970s, soybean production displaced 2.5 million people in Paraná state and 0.3 million in Rio Grande do Sul.  Many of these people moved to the Amazon where they cleared pristine forests (Fearnside 2000).  When plantations encroach on nature reserves, or reserves for indigenous people, locals often find it hard to stand up for their rights – regardless of whether they have formal land ownership papers.  Falsification of property contracts, sometimes with the complicity of local authorities, is common practice to “steal” land for agricultural purposes.  Expansion of agricultural and grazing land threatens 650,000 Brazilian Indians in over 200 tribes, according to Survival International.

NGOs have documented cases of land eviction, misuse of pesticides and, in Paraguay, violent suppression of land protests related to soy.  Greenpeace has documented use of slaves in soy farms in the Amazon region, with workers being duped into coming to ranches where their papers are taken away and they are forced to work.  The Brazilian government keeps a ‘dirty list’ of farms successfully prosecuted: in 2004, for example, it intervened in 236 cases of slavery in soy farms involving over 6,000 labourers including 127 children.

Monoculture Soy is an intensively grown crop that uses high quantities of energy, water, herbicides and pesticides.  You can read further about the effects of soy cultivation including soil erosion, water pollution, pesticide and herbicide use, social conflict, climate change and even slavery in this Vegan Sustainability report.

How to stop and reverse the damage of Soybean production?

Soy has only limited potential for yield increases, owing in part to its nature as a biological nitrogen fixer, which renders it largely unresponsive to fertilizers; between 1995 and 2011 aggregate soybean yields increased by just 1 per cent in the major producing countries.  So any increase in consumption will be met by expanding the land area being used to grow soy.  The WWF estimate an increase to 200 million ha by 2050.  Assuming global average productivity that would require a massive two million km2.

Around 75 per cent of soy worldwide, and 93 per cent of soy imported to Europe, is used for animal feed. Between 1967 and 2007 pork production rose by 294 per cent, egg production by 353 per cent and poultry by 711 per cent (FAO, 2011) while per capita beef consumption remained relatively static.  The below diagram shows the explosive growth in poultry and pork consumption from 1961-2013.  Moving from a global average of 10 kg of pork and poultry per person per year to 30 kg per person while the population increased from 4 to 7.5 billion increased pork and poultry production from 40 to 225 million tonnes of meat per year.  Globally as wild fish capture continues to decline aquaculture, especially in Asia, is becoming another user of soy. 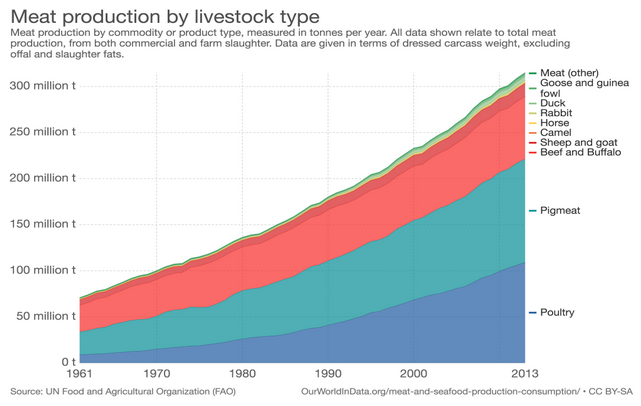 The ecological genocide and massive social disruption caused by soy production is being driven by the violence of our current food system, which is based on the animal agriculture and aquaculture industries.  The only way to restore these precious ecosystems, which stabilise the climate system and sustain the hydrological and other vital cycles of life in a symbiotic relationship with the indigenous people of these regions is to transition to a plant based food system.

Educate yourself and advocate for this transition with your friends and family and local community by reading the full report here.