This book was written in 2005 and since then has become an Amazon number one best seller. Will Tuttle has a Ph.D. in Philosophy and regularly gives talks in the U.S. and elsewhere about the way we treat animals and how this is linked to social justice, peace, spirituality, health and the environment. The book is an exploration of all the reasons why people should adopt a plant-based diet and go vegan. 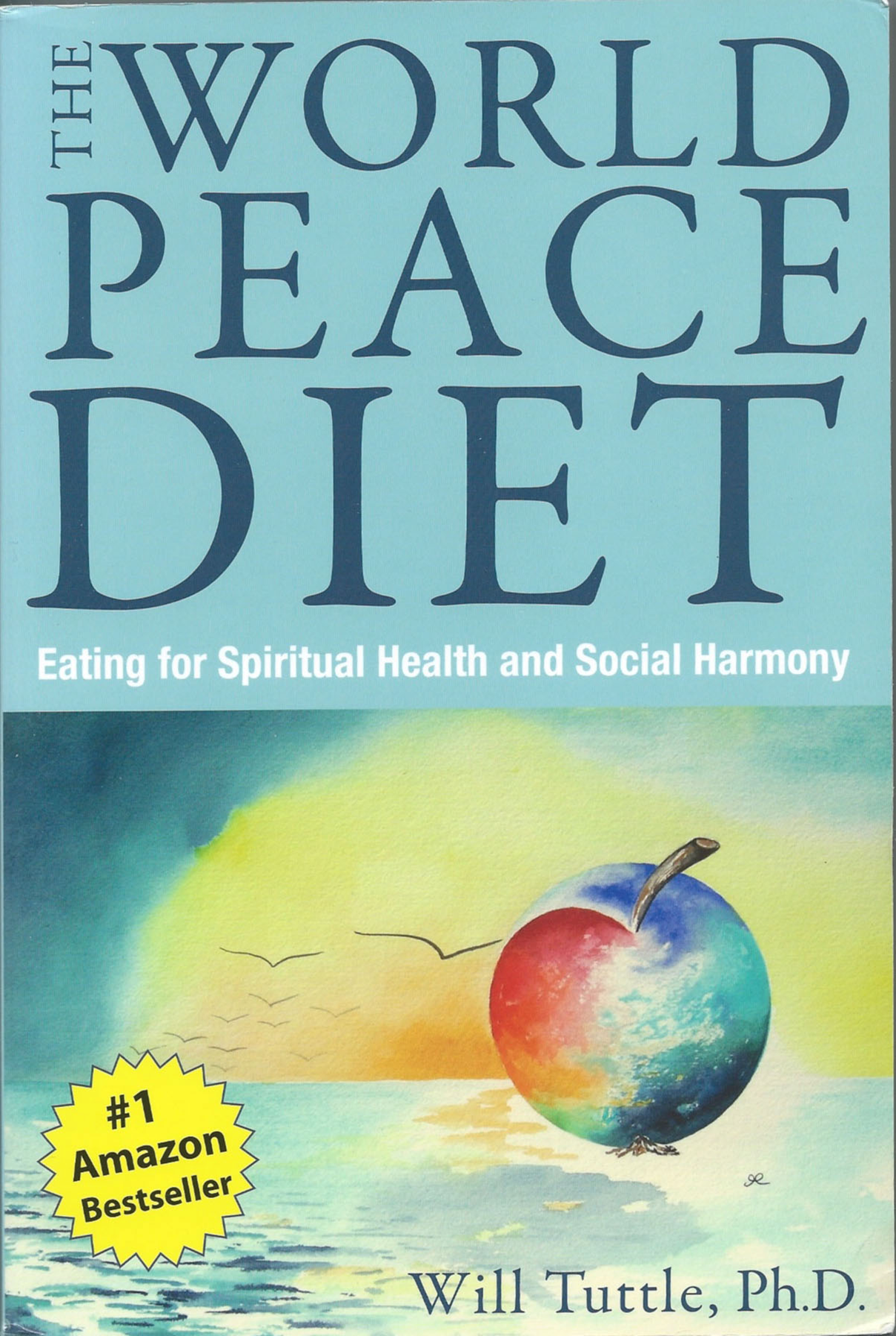 Throughout the book, Tuttle talks about human violence and asserts that this is related to the violence we inflict on animals for our food.  A quote from the first chapter summarises this point: “Being unwilling and unable to see, confront and take responsibility for the hidden ocean of horror that our most basic activity causes to those who are as sentient and vulnerable as we are, we have split ourselves into a schizophrenia of politeness and civility that lives uneasily with the remorseless cruelty that surfaces whenever we obtain or eat animal foods.  I believe this split is the fundamental unrecognised wound we modern humans suffer, and from it many other wounds and divisions naturally and inevitably follow.  It is so deep and terrible that it is taboo to discuss it publicly.”

Tuttle makes numerous references to our herding culture which began about 10,000 years ago, and says that humanity’s violence has its roots in this culture of complete dominion over animals.  When humans first began herding animals they started to control their numbers, their reproduction and the conditions in which they lived.  The lives of these animals came completely under human control, and they began to be seen as mere commodities to be bought, sold, killed, impregnated, milked, mutilated, confined and used for food, furs, entertainment, sport and labour.  This was a male culture of dominance, exclusion and violence which found expression in other areas of life as well such fighting in battle and in the subjugation of women and slaves.  In fact, Tuttle goes so far as to say that the problems which beset modern man such as war, terrorism, drug addiction, depression, child abuse, materialism, racism, poverty and oppression – all have their root causes in the way we treat animals.

Our current epidemics of obesity, diabetes, heart disease and cancer are also caused, in large part, by the animal-based foods that we eat.  Tuttle says: “Our deep urge to evolve to a more spiritually mature level of understanding and living, and to create a social order that promotes more justice, peace, freedom, health, sanity, prosperity, sustainability, and happiness, absolutely requires us to stop viewing animals as food objects to be consumed and to shift to a plant-based way of eating”.

Tuttle explains that we have all been indoctrinated into a meat-eating culture from birth, and so most people never question the ‘rightness’ of what they are doing.  Most do not question the violence that is necessary in order to put this type of food on their plates, and if they do, they dismiss it as something that is natural and necessary.

Tuttle says that when we eat food we are assimilating the ‘vibration’ or energy of that food.  Animals who have been slaughtered are filled with fear and terror and this negative energy is going into our bodies.  He says that as long as we continue to eat the flesh of beings who have suffered and been killed we will not be able to find peace.

This is a great book and it makes its arguments very powerfully.  The book is interesting, well written and I found it compelling reading.  This is a book that should be read by everyone – by vegans and non-vegans alike.  Everyone has something to learn here.   Put simply, the message is ‘go vegan for greater peace for yourself and for the world’.  Highly recommended.

Since 2014, I have been co-instructing the Greater Good Science Center’s free massive open...