If someone were to ask you what veganism is like for communities across the world, would you know what to say? Would you be able to readily make connections outlining how veganism, a movement that opposes the oppression of nonhuman animals, relates to other social justice movements and why? Honestly and openly answering “no” to these questions is nothing to be ashamed of if you are willing to learn and work towards understanding why these concepts are vital to our movement. “No” as an answer can even be expected from a mainstream vegan movement that has forgotten to take into account the ways that a lack of consistent anti-oppression and the awareness of how that in itself keeps it from spreading further holds it back. As a rule, none of us knows what it means to be a vegan from different communities and culture since only those communities can speak for themselves on their own experiences and views. As for the second question, veganism is very much part of the social justice spectrum working to take down an oppressor-oppressed dynamic, but what is often overlooked is that certain communities of vegans also face and must fight their own oppression at the same time that they work to end nonhuman exploitation. 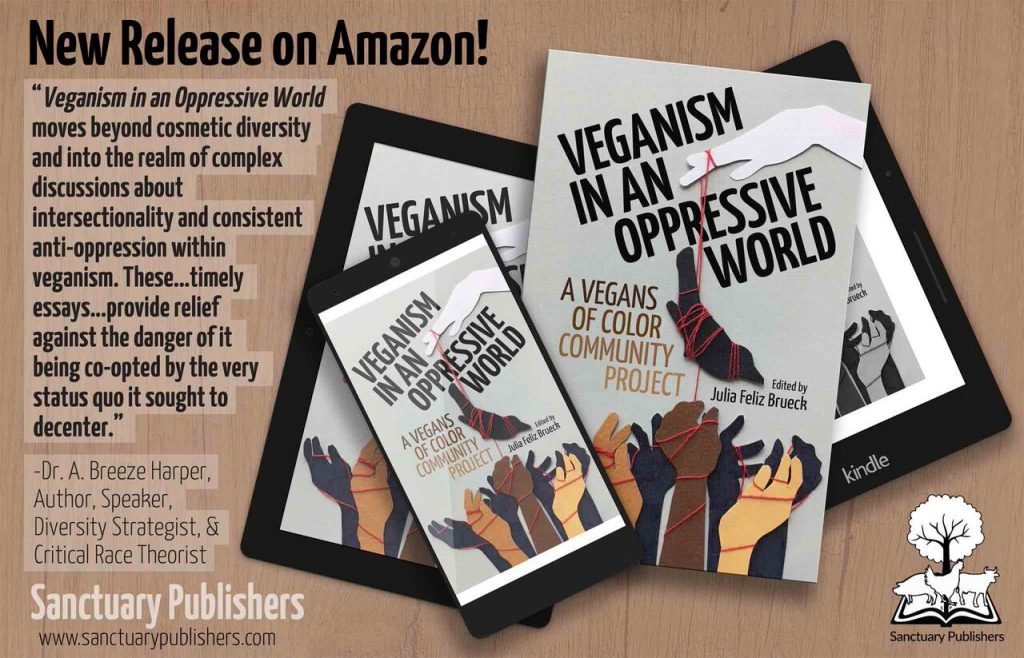 “Veganism in an Oppressive World”, a new book by Sanctuary Publishers, a vegan book publisher committed to raising the voices of nonhumans and other marginalized communities, helps to guide new and seasoned vegans through the intricate connections that has kept veganism a fringe movement. Through the voices of vegans of color from communities around the world, poetry, short reflections, interviews, and scholarly essays provide the reader with the knowledge of what it means to experience veganism outside the accepted mainstream lens that currently defines veganism.

The reality is that without awareness, inclusivity, perspectives from difference lenses, and consistent anti-oppression, veganism will continue on a path of solitude in a world where other social justice movements are banding together to fight against a common root enemy. Movements across the world have realized that oppression is interconnected since “There is no such thing as a single-issue struggle because we do not live single-issue lives (Audre Lorde).” In reality, we do not experience the same struggles, opportunities, access, history, or culture, which means that vegans also experience veganism very differently. A veganism that embraces this consciousness does not mean decentering nonhumans from their own movement or compromising its goals. On the contrary, arming ourselves with the knowledge of what embracing veganism signifies to diverse communities and what it means to be consistently anti-oppression means that veganism will finally give itself the opportunity to expand across barriers that holds it back and will finally become the just, compassionate movement that it claims to be.

So, today, I ask, are you ready to put in the work?

Julia Feliz Brueck is a decade-long vegan, published author & illustrator, as well as the founder of Sanctuary Publishers, www.sanctuarypublishers.com, a vegan publisher helping to raise the voices of nonhumans and other marginalized communities. Sales from “Veganism in an Oppressive World” help support the vegan organization, Food Empowerment Project.

You can buy the book directly from Sanctuary Publishers or on Amazon.