In the run-up to December’s Climate Conference in Paris, James O’Donovan asks if any real change has come about as the result of these climate summits.  Have they really been successful?

This December more than 190 governments will meet in Paris to try to agree a new global agreement to reduce global green house gas (GHG) emissions to avoid further impacts of climate change.  Already countless meetings are happening internationally in the run-up to the conference.

We are currently on track to far exceed a temperature increase of 2°C beyond which global warming will move us past some irreversible environmental tipping points.  Current emissions trajectories have us heading for a rise of about 5°C.  The temperature difference between today’s world and the last ice age was about 5°C.

In 1992, governments met in Rio de Janeiro and established the UN Framework Convention on Climate Change.  That agreement, which is still in force, bound governments to take action to avoid dangerous climate change, but did not specify what actions.

In 1997, the Kyoto Protocol required worldwide cuts in emissions of about 5%, compared with 1990 levels, by 2012, and each developed country was allotted a target on emissions reductions.  But developing countries, including China, South Korea, Mexico and other rapidly emerging economies, were given no targets and allowed to increase their emissions at will.  The US Congress refused to ratify the agreement.  Legally, the protocol could not come into force until countries representing 55% of global emissions had ratified it. So it only became law when Russia ratified it in 2004.

In Bali in 2007 an action plan set the basis for a new agreement to replace the Kyoto Protocol.

In 2008 in Copenhagen all of the world’s developed countries and the biggest developing countries agreed – for the first time – to limits on their greenhouse gas emissions. This was a landmark, as it meant the world’s biggest emitters were united towards a single goal. The emissions reductions agreed on are still not enough to meet scientific advice, but they were a big advance on reducing emissions compared with “business as usual”.

Although the Copenhagen agreement was not fully adopted by the UN in 2009 because of last-minute chaos at the conference, it was ratified the following year in the form of the Cancun agreement.

There will be two main elements to the talks in December.  Firstly, more than 190 nations will try to reach an agreement on carbon emissions.  Secondly, they will try to agree on financing the agreement particularly for poorer countries.

Many other countries including India have yet to come up with their targets – known as Intended Nationally Determined Contributions – despite being asked to meet a deadline of the end of last March.

The issue of finance is hugely contentious.  In Copenhagen, rich countries agreed to supply $30 billion to poorer nations to invest in clean technology and to adapt their infrastructure to adapt to the likely damage from climate change and they said that by 2020, financial flows of at least $100bn a year would be provided.  Poor nations want a similar provision in place beyond 2020, but there is strong disagreement over how this should be done and where the funds will come from.

So how successful have all these massive conferences been?  Carbon dioxide (CO2) emissions from fossil fuel burning and cement production increased by 2.3% in 2013, with a total of 9.9±0.5 GtC (billion tonnes of carbon) (36 GtCO2) emitted to the atmosphere, 61% above 1990 emissions (the Kyoto Protocol reference year). So despite all of these conferences emissions continue to rise steadily globally. 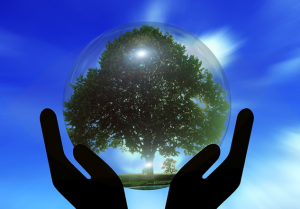 There have been some positive and some negative outcomes from these meetings.  The meetings have also given added impetus to the transition to renewable energies.  Though at times the policies to encourage the elimination of fossil fuels have had harmful effects.  For example, the policy of mandating that 10% of transport fuels in the EU are from biofuels encouraged massive deforestation in SE Asia as Palm Oil Plantations expanded rapidly.  So far, the conferences have not admitted the central role that agriculture plays in GHG emissions.  Some countries have been proactive in reducing their emissions and have been successful in meeting or exceeding their GHG emission reduction targets and have also set up industries and created employment in the emerging renewable energy sector.

It’s important to also remember that reducing GHG is just one environmental problem that does not address deforestation or species extinction driven by animal agriculture.  It is going to take a much profounder change in our lives if we are going to even begin the work of living in harmony with all the other species and ecosystems on the planet.