Vegan Sustainability in the News

A roundup of the main vegan and sustainability news stories from the past few months..

and Bristol. Check out their brilliant free Vegan Guide.

Simultaneously, PETA replaced every advert at Clapham Common tube station with a vegan poster. 60 adverts in total showed photos of pigs, cows and chickens with the slogan “I’m ME, Not MEAT”.

Meanwhile, Veganuary, the charity that encourages people to go vegan for the month of January, had 2,500 ads displayed inside London’s tube trains. The campaign started on the 15th of December and ran until January 2nd.  It was crowdfunded by the vegan community. The ads featured three animals – Rocky the calf, a chick called Little Eric and a piglet named Ernie – who urge passengers to read their stories and join thousands of others around the world who choose to eat no animal products at all in January. The group described it as the biggest vegan campaign ever featured on the London Underground. Veganuary also have a really good Vegan Starter Kit

24 members of the EU parliament signed a letter to the European Commission President insisting on a reduction in animal agriculture and recommending a shift to a plant-based diet. The letter outlines the dangers posed by animal products to human health and the environment.  It also recommends that EU policy should aim at a 30% reduction in the consumption of animal-based foods by 2030, and that the consumption of fruits and vegetables over meat be encouraged by means of an overhaul of the agricultural subsidies system which currently incentivises meat production. The five page letter can be read here.

Fur Farming in Japan and Croatia comes to an end

Since 2006 it has been illegal to establish any new mink farms in Japan. However, existing farms were allowed to continue operating and the Otsuka mink farm was the last remaining fur farm in the country.  Its closure at the end of 2016 marks the end of the industry there.

From the 1st of January 2017 fur farming was also outlawed in Croatia. The introduction of the new law comes after a 10-year-long phase out period. Despite strong resistance from the fur industry, the government listened to concerned citizens and animal rights groups in coming to its decision. Celebrity Sharon Osborne’s video in partnership with PETA was described as instrumental in bringing awareness to the cruel chinchilla fur industry there.

More than 22.5 million poultry were killed amid the worst bird flu epidemic in farms across South Korea in recent times. Korea has suffered several bird flu outbreaks since 2003 but the outbreak in 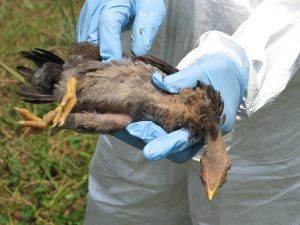 the winter of 2016, caused by the highly pathogenic H5N6 strain of bird flu, has been described as the worst ever. The flu also spread to the local zoo which had to be closed. These diseases can spread to other wildlife and can also kill people. 36 people were killed in the last major outbreak in mainland China in 2013.

In 2014 South Korea culled 14 million birds amid a bird flu outbreak. As of the end of March, 2016 the country had killed more than 156 million chickens and more than 9.5 million ducks, according to government data.