Vegan Sustainability in the News

A roundup of some of the main vegan and sustainability news items over the past few months.. 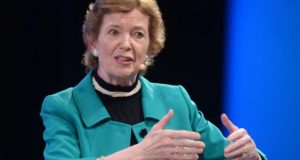 that: “We need each of us to think about our carbon footprint. Eat less meat, or no meat at all. Become vegetarian or vegan.” She also stated that: “We have to change, we cannot go on with business as usual.”

Mrs. Robinson currently runs The Mary Robinson Foundation for Climate Justice. The statement was received with enthusiasm by the vegan community, and with anger and outrage by the meat and dairy farming community, as might have been expected.

Eric Schmidt, executive chairman of Google’s parent company Alphabet, has named the number one “game-changing” trend of the future as the consumption of plant-based proteins instead of meat. 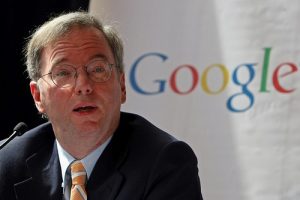 According to Fortune magazine, he revealed what he believes are the six game-changing technologies that will change the world. The six technologies are, in reverse order: tech in education, self-driving cars, mobile medical data, virtual reality, 3D printing in architecture, and—the number one most important trend—plant proteins in place of meat.

Schmidt points out that producing food from plants uses significantly fewer resources. Conventional meat requires many steps which are detrimental to the environment such as raising farmed animals, providing them with food and water,  transporting the animals to slaughter, processing the meat and packaging the meat for sale. A switch to plant protein would remove the animal from the equation altogether and allow harvesting of plants for direct human consumption.

A group of 40 investors managing $1.25 trillion in assets have launched a campaign to encourage 16 global food companies to diversify into plant-based sources of protein in order to help reduce environmental and health risks. Among the companies targeted were Kraft Heinz, Nestle, Unilever, Tesco and Walmart.

“The world’s over reliance on factory farmed livestock to feed the growing global demand for protein is a recipe for a financial, social and environmental crisis,” said Jeremy Coller, founder of the FAIRR initiative and chief investment officer at private equity company Coller Capital.

The investors want to know if major food companies have a strategy to profit from a plant-based protein market set to grow by 8.4 percent annually over the next five years. Forward-looking companies can encourage more sustainable diets by reducing reliance on meat and growing the market for plant-based protein alternatives.

Following the success of its North East Vegan Billboard campaign and nationwide bathroom advertising, Go Vegan World moved to the West Midlands area of the UK in October.  The campaign launched the first ever video billboard campaign in Birmingham and Wolverhampton on October 24th where it ran throughout World Vegan Month. 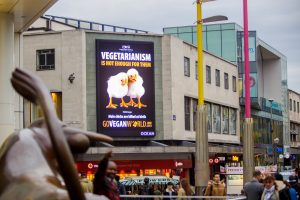 This campaign featured thought provoking ads on hundreds of taxis, motorway billboards and digital screens in cities and and Universities in the West Midlands, UK. In combination with its ongoing social media campaign, the ads were estimated to be viewed over 100 million times during World Vegan month alone, making this the longest running and largest ever vegan billboard campaign.

The campaign – run by Eden Farmed Animal Sanctuary, Ireland  – is due to move to Glasgow in December where you can hear its Director, Sandra Higgins, speak as part of her series of UK lectures on Animal Rights.

You can download the campaign’s Free Vegan Guide here.