Planetary boundaries (see wikipedia) are an attempt to develop a set of indicators to monitor the health of the global planetary system and to provide governments timely information on what activities need to stop or be changed in order to keep the planet in a healthy state.  They are a concept of nine Earth system processes proposed in 2009 by a group of Earth system and environmental scientists led by Johan Rockström and Will Steffen.  The group wanted to define a “safe operating space for humanity” as a precondition for sustainable development.  The scientists assert that once human activity has passed certain thresholds or tipping points, defined as “planetary boundaries”, there is a risk of “irreversible and abrupt environmental change”.  The nine Earth system process boundaries mark a theoretical safe operating zone for the planet. 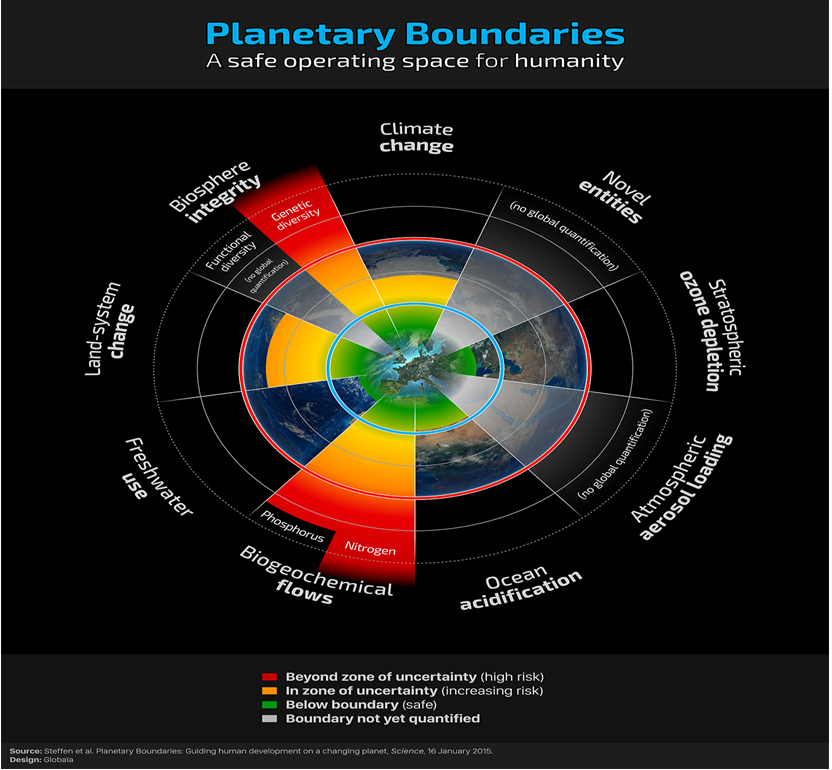 Estimates indicated that three of these boundaries—climate change, biodiversity loss, and the biogeochemical (excess nutrients from agriculture) flow boundary—appear to have been crossed.

From Holocene to Anthropocene

It’s obvious to most people that the planet Earth is a finite system, which means it has limits.  The Holocene began about 12,000 years ago.  It is the current interglacial period, and it has proven to be a relatively stable environment of the Earth during which we developed agriculture, villages, cities, and contemporary civilizations.  There have been natural environmental fluctuations during the Holocene, but the key atmospheric and biogeochemical parameters have been relatively stable.  This stability and resilience has allowed agriculture to develop and complex societies to thrive.

According to Rockström et al., we “must take the range within which Earth System processes varied in the Holocene as a scientific reference point for a desirable planetary state.”  Since the industrial revolution, the planet has entered a new epoch, the Anthropocene.  In the Anthropocene, humans have become the main agents of change to the Earth system.

There have been other well publicised scientific warnings about risks to a range of biophysical processes.  In 1992 scientists issued a warning to humanity using a number of environmental indicators.  This was updated in 2017 as shown below with all but ozone depleting chemicals continuing to deteriorate.

Since the advent of the Anthropocene, the rate at which species are being extinguished is 100 times higher than the background rate, and humans are now the driving force altering global river flows as well as water vapor flows from the land surface.  Continuing pressure on the Earth’s biophysical systems from human activities raises concerns that further pressure could be destabilizing, and precipitate sudden or irreversible changes to the environment.

“Our planet’s ability to provide an accommodating environment for humanity is being challenged by our own activities.  The environment—our life-support system—is changing rapidly…….to an unknown future state of significantly different conditions.” – Steffen, Rockström & Costanza (2011)

The proposed framework lays the groundwork for shifting the approach to governance and management, away from the essentially sectoral analyses of limits to growth aimed at minimizing negative externalities, toward the estimation of the safe space for human development.
Transgressing one or more planetary boundaries may be highly damaging, irreversible, or even catastrophic, due to the risk of crossing thresholds that trigger non-linear, abrupt environmental change within continental – to planetary-scale systems.

Imagine that we are Earth doctors and we are being asked to diagnose the Earth’s condition and prescribe a course of action for healing and reversal.  Let’s take each of the planetary boundaries and examine the root cause for the human induced perturbations in the underlying nine Earth processes.

As Earth physicians, let us imagine that we are asked to write a prescription for each and every human being to fill so that humanity’s overall relationship with the Earth changes to a more benign, safer, steady state version.  What should we tell people to do?  Should we tell them to focus on weaning themselves from fossil fuel use, i.e., go solar, or should we encourage the ongoing transition away from animal products, i.e., go vegan?

Imagine that we wave a magic wand and get everybody to go vegan instantly.  This immediately impacts 8 of the 9 planetary boundaries and instantly begins to reduce the violated safe limits as well.  If everybody went vegan, it would immediately release 35-40% of the land area of the planet back to Nature, to regenerate forests and re-wild the planet.

Next, let us consider a second thought experiment.  Imagine that we can wave the same magic wand and turn our entire energy infrastructure over to solar, wind and other clean sources instantly so that fossil fuels no longer have to be burnt to run the human enterprise.  Let us assume that we leave everything else unchanged as at present so that we continue to eat animal foods and indeed, double our consumption by 2030 as envisioned by the UN FAO.  As a result of this instant change to our energy infrastructure, we stop pumping a majority of the GHGs, especially carbon dioxide (CO2), into the atmosphere and we immediately stop exacerbating human impact on 4 of the 9 planetary boundaries.  That is the good news.  But the bad news is that:

Therefore, in this second experiment, the conversion of the energy infrastructure does nothing to heal the climate and would actually make the situation worse.

As Earth doctors, our diagnosis task is a no-brainer, really.  Considering all the symptoms that the Earth is exhibiting and considering the results of our thought experiment, we can now see that it is primarily Animal Agriculture, with its deliberate, institutionalized violence on other beings on a gargantuan scale, that is the main source of the cancer underlying the Earth’s fever.

However, that doesn’t mean we should stop converting our energy infrastructure over to clean sources.  In fact, the two steps, go vegan and go solar, will be accomplished simultaneously.  Those of us in the global North who have access to food abundance will go vegan right away and then convert the energy infrastructure over to clean sources over the next 1-2 decades, as solar technologies get produced in volume.  This is the optimal order for the change to occur since the carbon sequestration due to the vegan transition will then compensate for the temperature increase due to the atmospheric aerosol reduction from the clean energy transition.