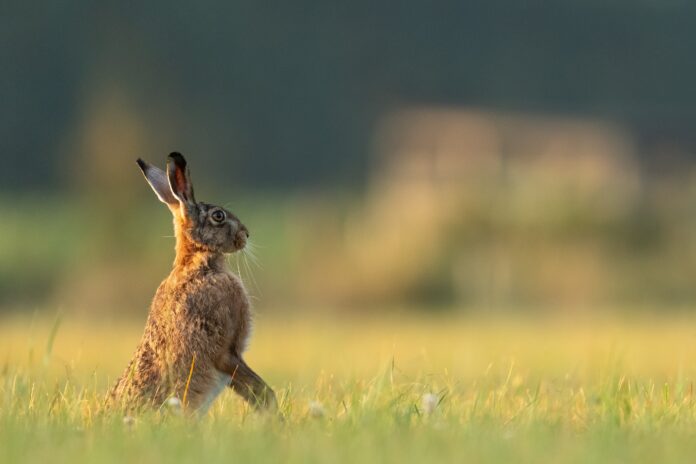 Hare coursing is one of the last bloodsports which is still legal in Ireland.  About a month before a hare coursing event, coursing club members will go into the countryside in order to trap wild hares by forcing terrified hares into a net.  Hares, which are delicate, shy animals, are then transported via boxes to the club – many of them are injured in the trapping and transport process.

For the next month, hares are kept in small, cramped enclosures which are nothing like their natural habitats.  Hares are typically solitary animals and living in confining conditions causes stress, injuries and disease transmission.  The hares are then forcibly familiarised with the coursing field so that they can provide entertaining sport when they are released.

When coursing begins, the hare is given a head start of 100 yards before the greyhounds are released; at the end of the course is an opening through which the hare can escape. However, most hares do not make it to the escape but are instead caught by the greyhounds – even though the greyhounds are muzzled in licensed coursing club events, they are still capable of severely injuring or killing the hare as the dogs are able to easily toss the hares into the air while muzzled.  Even if the odd hare does make it through the opening to escape from the greyhounds, the hare will just be raced again in a subsequent course.

Currently, hare coursing is allowed so that a very small minority of individuals can be entertained by the maiming and killing of thousands of animals – while potentially endangering the community in the process.  Animal advocacy groups have campaigned for an end to hare coursing in Ireland for decades.

Those who are involved in animal advocacy are aware that oftentimes the laws and legal system of a country do not prioritise animal rights, protection and welfare.  Rather, passing legislation which protects animals can be a Herculean– if not Sisyphean – task.  A new area of study – green criminology – may be able to help activists, governments and NGOs tackle animal cruelty and environmental harms more effectively.

Green criminology encompasses a number of different perspectives, fields and areas of study, making it difficult to easily define and categorise.  However, green criminologist Dr. Angus Nurse argues that it can be summarised as “an umbrella term for a criminology concerned with the general neglect of ecological issues within criminology, as well as the incorporation of green perspectives within mainstream criminology.”[1]

The study of green criminology helps to reshape the dialogue around wildlife and animal offences by shifting the focus from crimes to harms.  Often there is not actually a law prohibiting a specific activity, even though that activity has a detrimental effect on the environment or directly harms animal and plant life.  If there is no law prohibiting the behaviour, it cannot be considered illegal and punished as such.  By focusing on harms done to the environment rather than on specific actions which violate laws, a green criminological perspective recognises a wider array of environmental harms and abuses than would otherwise be considered.

Hare coursing is an example of a harm to wildlife that is technically not a crime in Ireland but which creates a direct harm to wildlife.  The Irish government awards licenses for hare coursing which are administered by the Irish Coursing Club, a body that was established under the Greyhound Industry Act 1958.  Unlicensed hare coursing is illegal and typically involves unmuzzled dogs and higher fatality rates for hares.  However, regardless of whether the coursing is licensed or not, animal cruelty, injuries, and deaths are involved.

Understanding why individuals commit crimes helps criminologists to comprehend the crime and to analyse how to prevent, punish, and deter similar crimes more effectively.  Many wildlife crimes are committed as a result of direct financial need, while other wildlife and environmental crimes are committed by organised crime groups or by passionate hobbyists such as egg collectors.

In regards to hare coursing, the type of offender involved would be what is referred to as a masculinities offender; this term describes someone who is “primarily motivated by power and masculine behaviours”.[2]  The crimes in which masculine identity are involved include “offences where deliberate infliction of pain is a factor, such as badger baiting, cock-fighting, dog-fighting, and hare coursing” and these crimes are “intrinsically linked to the exercise of male power over the vulnerable”.[3]  While women do sometimes participate in these offences as well, these types of activities are more likely “to appeal to young men seeking to establish their identity and assert their masculinity and power over others”.[4]

In the case of harms and crimes that are committed as a result of masculinities, Dr. Nurse suggests that law enforcement should consider a more flexible approach. He argues that “the effectiveness of prison or high fines is also questionable”, particularly as “masculinities offenders may come to see prison as simply an occupational hazard as well as reinforcing their male identity and confirmation of society’s lack of understanding of their needs and culture”.[5]  Rather, law enforcement should tailor their approach to such offenders and use situational crime prevention and rehabilitation efforts along with “the traditional law enforcement approach of detection and prosecution”.[6]

Animal advocates and law makers can benefit from a green criminological analysis of those who are involved in hare coursing.  It is one thing to ban hare coursing in Ireland, but it is another thing altogether to effectively prevent hare coursing from taking place – whether it is licensed or unlicensed.  Understanding the socio-cultural forces which lead to hare coursing may help to develop effective policies to combat it.

Are you already a vegan? If not then you need to watch Earthlings -...

Vaquejada is a practice whereby two vaqueiros (cowboys) on horseback aim to knock over...
Previous articleThe EU moves to ban Cages for Farmed Animals
Next articleClimate and the Food System