Magazine - Back IssuesAutumn 2019Research & Reports
August 28, 2019
Via2019 Report - 'Eating away at Climate Change with Negative Emissions'

This is a 2019 report by Harvard Scientists, Helen Harwatt and Matthew Hayek, showing how a UK Plant Based Agricultural System would enable the UK to meet its Climate Change legal obligations while improving its overall food security. 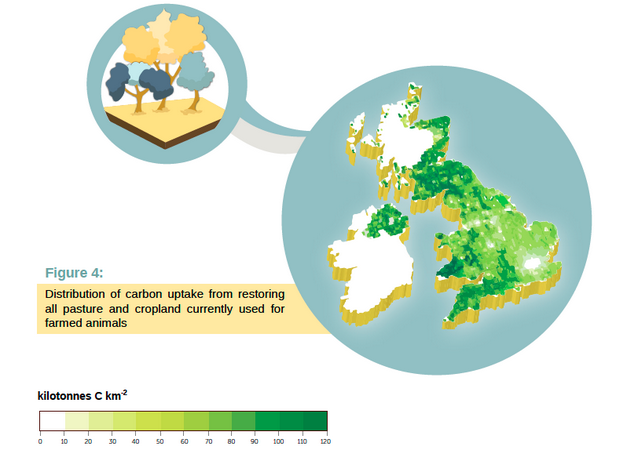 The United Kingdom (UK) is not on track to meet its legally binding commitment to reducing greenhouse gas (GHG) emissions by 80% by 2050 under the UK Climate Change Act, and even further reductions would be required to align with the 1.5°C aspiration of the Paris Agreement.  The GHG budget most consistent with limiting warming to 1.5°C would allow the UK around 12 years of emissions at current levels.  Hence, if UK emissions do not decrease from current levels, they will be consistent with temperatures beyond 1.5°C of warming in just 12 years’ time.  Radical action, far beyond that currently planned, is required to reduce GHGs steeply and rapidly in line with the Paris Agreement.

Limiting warming to 1.5°C above pre-industrial temperatures with little or no overshoot requires carbon dioxide removal (CDR) from the atmosphere.  The most readily deployable CDR option at scale in the UK is the restoration of its native forests.  Reforestation could provide the CDR needed to help meet the UK’s current climate change commitments, and beyond that, to staying within the 1.5°C budget.  Animal agriculture is the biggest land user in the UK.  Due to its relatively low food output to land use ratio, animal agriculture currently occupies 48% of all UK land.  We estimate the CDR potential of returning UK land currently used for animal agriculture to forest cover in two scenarios.

The remaining cropland in both scenarios is sufficient to provide more than the recommended protein and calories for each person in the UK.  In scenario 2, reforesting land currently devoted to pasture results in CDR of 3,236 million tonnes CO2, equal to offsetting 9 years of current UK CO2 emissions!

In scenario 1 (shown below), extending reforestation to include animal feed croplands increases the CDR to 4,472 million tonnes CO2, offsetting 12 years of current UK CO2 emissions!  In relation to the 1.5°C budget, CDR extends the permissible budget by 75% to 103%, for scenarios 2 and 1 respectively, up to 2050.

The above figure shows the spatial distribution of CDR that would occur if all agricultural land currently used for animal agriculture was restored to forest cover (Scenario 1 – Pasture and feed cropland restoration).

Restoring agricultural land currently used for farmed animals back to native forest would contribute substantially to aligning UK GHGs with the Paris Agreement, and provide new opportunities for alternative protein production, fruit and vegetable provisions, and enhanced food security. Reforestation would transform the UK landscape, providing additional benefits including habitats for the reintroduction of wildlife.  The multitude of potential benefits provides opportunities for joining up policy across climate change mitigation, agriculture, food, public health and rewilding.

Creating a Paris-compliant food system is essential – carbon dioxide removal from restoring a portion of agricultural land to forest must be included in the UK’s revised contributions to meeting the Paris Agreement, together with implementation of comprehensive policy measures to enable this shift and optimise for climate, ecosystem and human health benefits.

A study carried out by Professor Patrick Brown of Stanford University and Professor Michael...
Previous articleTransition to an Irish Vegan Agricultural System
Next article12 Detoxifying Foods to Help Your Body Heal Naturally