Comparing the Meat, Fish, and Dairy Industries to Big Tobacco 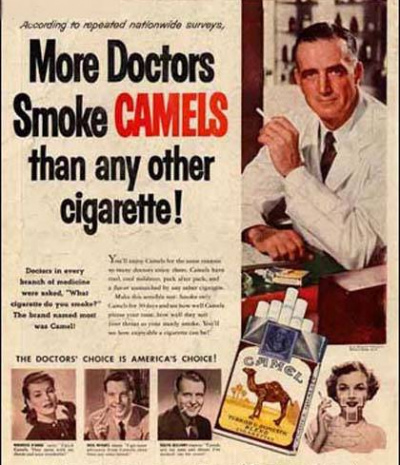 Back in 1912, when hardly anyone smoked cigarettes, lung cancer was like a museum curiosity—extremely rare. But in the next few decades, it rose dramatically around the world, about fifteen-fold. But they had already nailed it back in 1912. By mid-century, the evidence was considered overwhelming. Says who? Says the tobacco industry’s own research scientists, in an internal memo. We now know that senior scientists and executives within the cigarette industry knew about the cancer risks of smoking at least as early as the 1940s.

What was the government saying? Smoke Luckies. I mean who wouldn’t want to give their throat a vacation, not a single case of throat irritation, how could your nose and throat be adversely affected? Cigarettes are just as pure as the water you drink.

And if you do get irritated, no problem, your doctor can write you a prescription for cigarettes. This is an ad from the Journal of the American Medical Association. After all, “don’t smoke” is advice hard for patients to swallow. Reminds me of the recent survey of doctors that found the #1 reason doctors don’t prescribe heart-healthy diets was their perception that patients fear being deprived of all the junk they’re eating. After all, Philip Morris reminds us, we want to keep our patients happy; to make a radical change in habit may do harm. You’re a doctor; you don’t want to harm your patients. Even bunnies prefer Philip Morris (when you instill smoke solutions in their eyes).

The tobacco industry gave medical journals big bucks to run ads like these.  Not a problem, though, Philip Morris claims come from completely reliable sources, based on studies conducted by recognized authorities published in leading medical journals. Even kindly offering to send free packs of cigarettes to doctors, so they can test them out themselves. So, join us at the next AMA convention.

What did the American Medical Association have to say for itself? Like most other medical journals, they accepted tobacco ads. We have yet to see an autopsy with a single lesion that had a Marlboro label on it. No lung tumor has ever been found with a little tag attached that said “Made in the tobacco fields of North Carolina.” Case closed.

In fact, even after the Surgeon General’s report came out, the American Medical Association, American Cancer Society, and Congress were still dragging their feet. The government was still subsidizing tobacco—like our tax dollars subsidize the sugar and meat industries today. The AMA actually went on record withholding endorsement of the Surgeon General’s report. Could that have been because they were just handed ten million dollars from the tobacco industry?

Today, the money is coming from big food. The American Academy of Family Physicians has accepted large sums of money from Coca-Cola to fund patient education on obesity prevention. I wonder what that pamphlet is going to say.

Who was the #1 partner listed on Coca-Cola’s website? The American College of Cardiology.

Summary Fish and seafood are often recommended as good sources of healthy nutrients like protein and...
Previous articleMovie Review: What the Health
Next articleThe Protein Myth