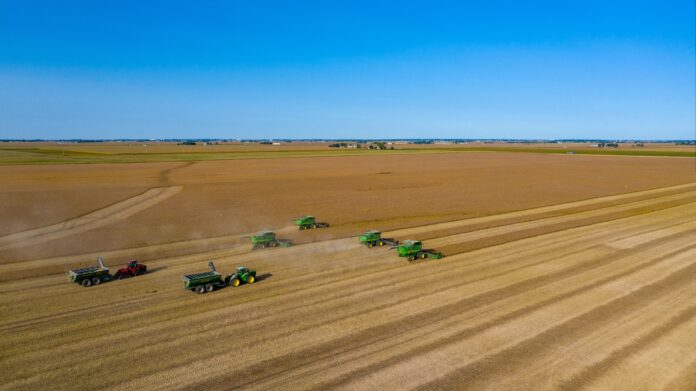 The following is a selection of quotes and images from the above titled research paper with a few explanatory comments by James O’Donovan.

“The current production of crops is sufficient to provide enough food for the projected global population of 9.7 billion in 2050, although very significant changes to the socio-economic conditions of many (ensuring access to the global food supply) and radical changes to the dietary choices of most (replacing most meat and dairy with plant-based alternatives, and greater acceptance of human-edible crops currently fed to animals, especially maize, as directly-consumed human food) would be required. Under all scenarios, the scope for biofuel production is limited. Our analysis finds no nutritional case for feeding human-edible crops to animals, which reduces calorie and protein supplies. If society continues on a ‘business-as-usual’ dietary trajectory, a 119% increase in edible crops grown will be required by 2050.”

“Each year around the world 5935 kcal/p/d of crops directly edible by humans are grown alongside 3812 kcal/p/d of vegetable matter eaten by other animals but not directly digestible by humans (GPS: Grass, Pasture and Stover – wheat stalks, etc.). This total of 9747 kcal/p/d is more than four times the average dietary energy requirement for healthy life, which is 2353 kcal/p/d.”  It’s important to remember that all of the human edible and GPS calories are taken from ecosystems which have been converted to intensive or extensive agricultural systems and are effectively taken from other species (insects, birds and animals) and this process is the leading cause of biodiversity loss on the planet.

“Globally, 808 kcal/p/d are directed to ‘non-food uses’, mainly biofuels, particularly liquid hydrocarbons (Serrano-Ruiz et al., 2012). Other uses include cosmetics, pharmaceuticals, paints etc. (equal to 13.6% of food calories).  A further 126 kcal/p/d are invested for re-planting.”  This includes corn and sugar cane for ethanol and oil seeds (including palm oil, soy and canola) for biofuels.

The human edible food calories fed to farmed animals would be sufficient to feed 4.8 billion people.

“Farmed animals also receive the equivalent of 3812 kcal/p/d from GP&S. Farmed animals therefore consume the equivalent of 5550 kcal/p/d in total. However, they return just 594 kcal/p/d to the human food chain in the form of meat and dairy products.  This includes 54 kcal/p/d of farmed and wild fish. 4956 kcal/p/d are lost from the human food chain because of the inefficiencies of farming animals. This 12% conversion rate of plant material to meat and dairy products is in line with previous estimates.  A recent analysis estimated an overall 7% conversion efficiency of plant to meat and dairy calories in the USA (Shepon et al., 2016).”

“The sum of the separate wastes and losses identified above (excluding animal-related losses, investments, non-food uses and excess consumption) is 1329 kcal/p/d, or 22% of the human-edible crop calories grown globally.”

“2792 kcal/p/d delivered to consumers, who themselves waste 261 kcal/p/d. This leaves 2531 kcal/p/d actually eaten by humans.  This implies that, on average humans consume 178 ‘excess’ kcal/p/d above the ADER.”

81 grams/p/d of protein are eaten compared with a global population-weighted average recommended intake (ARI) of 44 g/p/d.  This implies a net excess consumption of 84%.

Plant foods provide 62% and Meat and Dairy and fish provide 38% of the protein people consume.

The overall effect of feeding human-edible food to animals is to decrease the overall available global protein supply by 51 g/p/d (or 116% of the global average RDA).

This means that enough protein is lost to provide the RDA of protein for the global population because protein rich plant based foods are fed to farmed animals who convert the majority of it to polluting animal manure.

“Our analysis shows no nutritional case for feeding human-edible crops to animals…..Overall, industrialised meat and dairy production……is highly inefficient in terms of the provision of human nutrition, since it reduces the energy, protein, iron and zinc supplies potentially available to humans from crops, and is incompatible with a sustainable global food system as currently conceived.”

When did you set up the Vegan Land Movement, and what prompted you to...

'High Steaks: How focusing on agriculture can ensure the EU meets its methane reduction...

Agricultural GHG emissions in Ireland are now over 35% of our total emissions (the...
Previous articleThe damaging effects of Animal Agriculture are WORSE than we think
Next articleIs there Slavery in your Seafood?