“Degrowth is not about austerity, it’s not about living in a primitive way in a cave — nothing like that. And of course degrowth is not COVID-19 lockdown. It’s about happiness, it’s about wellbeing, it’s about living happy with less things. And what real happiness is for each and every one of us — I think I will leave it up to all of you to decide, what real happiness means for you.” - Marula Tsagkari, University of Barcelona. 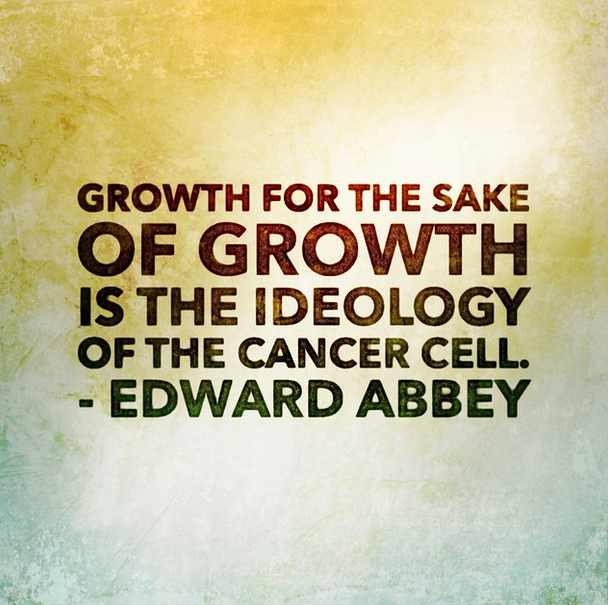 The 20th century saw unprecedented growth in all areas of the economy, mainly in the developed world.  Capitalism is based on the idea of constant economic growth, and GDP (gross domestic product) is used as a measure of economic health.  GDP is the total market value of all goods and services produced by a country in a specific time period. The problem with GDP is that it doesn’t measure important things like environmental health or human happiness.  In fact, it measures “everything except those things which make life worthwhile”, as Robert F. Kennedy pointed out back in the 1960s.  Even in terms of economic growth, GDP is a very skewed measure.  For example, an increase in crime might result in an increase in GDP as it may give rise to increased sales of security systems and house alarms.  So GDP tells us very little about what we really need to know.

We all know the toll that constant unstoppable production has taken on the planet.  We now have less than 10 years in which to massively reduce global CO2 emissions, or else we face a warming of 2°C which would be disastrous for the planet.

Similarly, economic growth does not make people happy.  The U.S. economy is 5 times bigger now than it was in 1960, yet in 2018 Americans only ranked 18th on the World Happiness Report.  We also know that many people don’t particularly enjoy their jobs, or are unhappy or depressed for other reasons – be it alienation, a feeling that life lacks meaning, overwork, stress, addiction, weight or health issues, or a host of other reasons.  Economic growth certainly is not going to solve these problems.  It may even have contributed to them.

The Italian word for degrowth is “la decrescita” – referring to a river going back to its normal flow after a disastrous flood.  Right now the ‘flood’ – both literally and figuratively – is not too far off, so degrowing the economy seems the right thing to do.

Degrowth is defined as a conscious set of policies designed to optimize human and planetary wellbeing while minimizing inequality, poverty and environmental harm.  It is a recognition that ‘more’ doesn’t mean better and that economic growth does not make us happier.  Degrowth acknowledges that economic growth in predominately western nations has come at the expense of developing countries, and at a tremendous cost to the planet and its ability to sustain life – to such an extent that we are now on the brink of environmental disaster.  It calls for a future where societies live within their ecological means.

Degrowth not only challenges the idea of GDP as an overarching policy objective but proposes a shrinking of the economic system to leave more space for human cooperation and ecosystems.

In short, life in a degrowth economy would involve less work and more time together, less individual ownership and more sharing, less debt and more services provided by the government.  It would mean more time doing things we enjoy, and less time working to pay for things that we don’t need and may never use.  It means a greater sense of community and connection, rather than the current focus on individualism and consumerism.

In 1972 a report called “The Limits to Growth” was published by the Club of Rome.  It showed that, in any of a series of computer-generated scenarios, world economic growth would end sometime during the 21st century.  It looked at variables such as population, fertility rates, mortality rates, industrial output, food production, non-renewable resources, the environment and human welfare.  Using simple maths and logic, it showed that growth cannot continue indefinitely within a finite system and that if everything continued in a ‘business as usual’ scenario society would collapse.

A recent study by Herrington showed that the study’s prediction was accurate.  Economic growth, if it continues on its current path, will then decline sharply, resulting in great societal upheaval.

Degrowth is synonymous with the following economic theories:

Degrowth is also synonymous with the following movements:

Additionally, many degrowth commentators point out that inequality and the divide between rich and poor needs to be addressed.  This can be done in a number of ways:

Divestment from fossil fuels is also intrinsic to degrowth, as is the scaling down of industries such private jets, the arms industry, single use plastics and industries with long distance supply chains.  The vegan movement also contributes to degrowth by bringing to an end the exploitative and environmentally damaging animal agriculture and fishing industries.

How can I take action towards degrowth?

Energy in the home:

Many people are already taking steps in their own lives to reduce their consumption of material goods and fossil fuels.  But governments and political parties also need to be on board.  Degrowth articles and websites are often lacking in specifics – they lack detail as to how the various policies could or would be carried out.  A great deal of discussion would be needed before deciding on specific policies.  Degrowth is a complex area, and changing the way we do things may have unseen effects that must be considered in advance.  One thing is certain – we don’t have a lot of time. We really need to start talking about degrowth now.  If we wait any longer it will be too late.

A study carried out by Professor Patrick Brown of Stanford University and Professor Michael...
Previous articleMore Species, but fewer Trees
Next articleIn the Future we may have more time for Leisure