Magazine - Back IssuesAutumn 2022Ecology and Biodiversity
August 30, 2022
By James O'Donovan

Extracts from the WWF Report, The EU Eats the World, Edited by James O’Donovan. 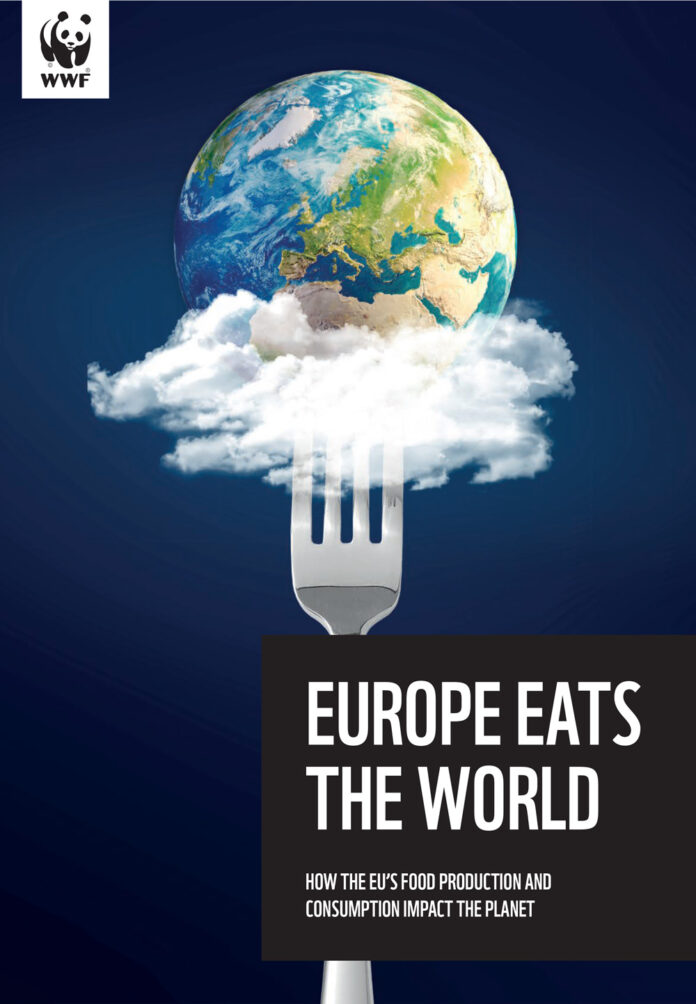 The EU ‘Eats the World’ according to WWF report

You can view the WWF report here.

The EU imports significantly more calories and protein than it exports and its domestic production is heavily dependent on imports of grains and oil crops, as well as fertilisers (and the gas used to manufacture them).

To strengthen food security, the EU should not focus on producing more, but on producing and consuming differently. We need to curb our excessive consumption of animal products, which depends on feeding vast quantities of imported and domestically produced crops to livestock. This would not only reduce our dependence on imports and our environmental footprint, but also improve human health through more balanced diets.

We also need to tackle the scandal of food waste – including food loss on farms. Some 145 million tonnes of food fails to make it off European farms each year. While efforts to increase outputs on our farms yield only marginal gains, there is vast potential to increase the food supply by rescuing a portion of this wasted production.

Rebalancing our diets and reducing waste – goals which an ever-growing number of European citizens actively support – can prepare the ground for more sustainable farming practices. This includes supporting more diverse, nature-friendly agroecological practices within the EU, and ensuring that EU consumption doesn’t lead to the loss of natural ecosystems overseas.

The importance of transforming our food system is recognised in a wide range of recent EU initiatives, including the Farm to Fork and Biodiversity strategies, and upcoming legislation on deforestation, nature restoration and pesticides.

Economic versus Nutritional Value of Food Exports and Imports

In economic terms, the EU is the world’s largest exporter of agri-food products. In 2020, the EU exported food and agricultural products worth €184 billion, with imports valued at €122 billion. These values represent about 9% of our total exported goods and 7% of imports – not insignificant, although less important than other product groups such as machinery and vehicles, chemicals and other manufactured goods

However, this simple fact hides some uncomfortable truths. If we measure what actually matters in nutritional terms, the picture changes drastically. When it comes to protein and calories, the EU has a significant trade deficit. Our high levels of food production, consumption and exports are largely dependent on high imports of agricultural inputs such as animal feed or fertilisers.

When agri-food trade is measured not in economic terms but according to what actually feeds the world, then our surplus becomes a large deficit. The EU is a net importer of both calories and proteins, relying on imports for the equivalent of 11% of the calories we consume and 26% of proteins (as shown below).

Ecological and Social Impacts of EU Meat and Dairy Consumption

The EU’s food system has severe environmental and social impacts, at home and abroad. Over the years, EU consumption has driven the loss of millions of hectares of forests and other natural ecosystems, fuelling climate change, biodiversity loss and social injustices.

Between 2005 and 2017, some 3.5 million hectares of forest were destroyed to produce agricultural commodities for the EU market – an area larger than the Netherlands. This released an estimated 1,807 million tonnes of CO2, equivalent to 40% of the EU’s annual emissions. Soy is the imported agricultural commodity that drives the most deforestation. It was responsible for 31% of the tropical deforestation embedded in EU imports between 2005 and 2017.

The average European consumes 61 kg of soy per year, with 90% of it “hidden” in the consumption of animal products. Most soy is crushed to produce oil, used for food or fuel, and a high-protein meal used for animal feed in intensive farming. In 2020-21, the EU used 25.2 million tonnes of imported soybean meal for feed; domestic production was just 0.9 million tonnes.

Palm oil imports are the next largest driver of deforestation, with EU imports responsible for destroying an average of 69,000 hectares of tropical forest each year between 2005 and 2017 (0.83 Million ha). Clearing these biodiverse, carbon-rich rainforests does little to contribute to food production: In 2018, almost two-thirds of imported palm oil, more than 5 million tonnes, were burnt as biofuel.

We produce more animal products than we consume, and we consume more than is good for us. To sustain this oversized livestock sector, we feed half the grain crops we grow to animals, while our intensive agricultural practices damage biodiversity, soil health, and the climate. Vast quantities of food are also wasted, including on farms – which, contrary to popular belief, is a greater problem in Europe than in low-income countries.

At least half of EU cereal production is usedfor animal feed, according to official statistics. The proportion varies depending on the crop: For example, of the 65 million tonnes of maize produced in the EU in 2020-2021, 50 million tonnes was used for feed. It’s a similar story when it comes topulses and to oilseed crops such as sunflowers and rapeseed, which are used for both feed and oil –most of which is turned into biofuel. Overall, it has been estimated that 63% of the EU’s arable land is directly associated with livestock production.

The EU is the world’s largest seafood importer, importing more than half of what it consumes.

Some of this seafood comes from tropical regions where local communities rely on these fish stocks for protein, but are facing declining catches due to overfishing and climate change.

Europe’s seafood consumption has environmental and social impacts worldwide. More than a third of global fish stocksare exploited beyond sustainable levels. Overfishing is a major threat to marine ecosystems – where vertebrate populations have fallen by half since 1970 – and the millions of people who depend on them for their livelihoods and as a primary source of protein.

Most EU stocks remain overfished, as is the case in many lower-income regions: In North, NorthWest and West Africa, for example, more than 50% of fish stocks are over-exploited, largely by foreign fleets. Human rights abuses, including forced labour and trafficking, are all too common in the fishing sector.

The growing importance of aquaculture also brings sustainability challenges at sea and on land. In 2019, global seafood production(including plant and animal aquaculture) reached a new peak of 214 million tonnes. But production from wild-capture fisheries has remained relatively static since the late 1980s: The continuing growth in seafood consumption has been made possible by aquaculture. Aquaculture produced 120 million tonnes of seafood in 2019, compared to 94 million tonnes harvested from the wild.

The EU produced only a little over 1% of the global aquaculture output, at 1.37 million tonnes, although this represents a growth of 11% over the last decade. Aquaculture, however, brings its own sustainability challenges, both at home and abroad, including energy use, pollution, disease outbreaks and, as with livestock farming, the need to produce feed. Alongside fish meal and fish oil from capture fisheries, which can exacerbate problems of overfishing, fish feed now increasingly includes land-based sources such as soybean meal, which may contribute to deforestation, habitat conversion and other negative impacts.

Food waste is also a major issue globally and in the EU – where food waste is 173 kg per person.

Editor’s Note: The report then outlines a range of ‘less and better’ type solutions but none of them even come close to the benefits attained from a transition to a veganic plant based food system.

This is the fifth edition of Birdlife International’s State of the World’s Birds.  The...

To tackle the ecological, climate and public health crises, meat and dairy consumption must...