Four reasons why fish should not be considered a health food

This article originally appeared on the PCRM website, and is reproduced here with kind permission. 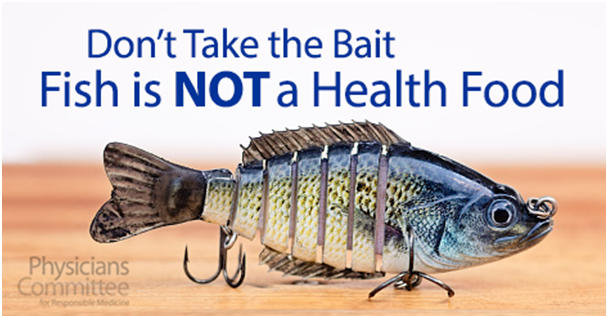 1. Fish is high in cholesterol

Touted as a health food, fish has a reputation for being heart-healthy. People who opt for fish to try to protect their hearts might not realize that fish is often high in cholesterol.

2. Most of the fat in fish is not heart-healthy fat

While fish does contain omega-3 fats, most of the fat in fish is not heart healthy. Between 15 and 30 percent of the fat in fish is actually saturated fat, which stimulates the liver to produce more cholesterol. High-fat foods are associated with poor heart health outcomes. Fish is often celebrated for being low in fat, but this is often not the case: 52 percent of the calories in Chinook salmon come from fat. Plant foods, on the other hand, are often naturally low in fat. Only 2 percent of the calories in rice and 4 percent of the calories in beans come from fat. Research has shown that diets low in fat are best for preventing heart disease. In 1990, Dean Ornish, M.D., demonstrated that a low-fat vegetarian diet is capable of reversing heart disease. He put patients with heart disease on a low-fat, plant-based diet, and in one year, 82 percent showed a measurable reversal of their coronary artery blockages.

3. Supplementing with fish oil may do more harm than good

In recent years, fish oil has been hailed as a miracle cure for everything from heart disease to dementia. Many people supplement with fish oil to increase their intake of omega-3 fatty acids, which are important for maintaining cellular function. Unfortunately, studies have shown that most of the health claims associated with fish oil may be unfounded. A comprehensive analysis in the Journal of the American Medical Association involving 20 studies and more than 68,000 patients showed no link between fish oil and heart health. Similarly, a study published in the New England Journal of Medicine reported that patients who supplemented with fish oil did not reduce their risk of heart disease. Additionally, recent reports indicate no association between fish oil supplementation and the prevention or improvement of dementia symptoms. Research has even shown that omega-3 supplements may increase diabetes and prostate cancer risk. Fortunately, many plant foods contain alpha-linolenic acid or ALA, which is the only essential omega-3 fatty acid. Excellent sources of ALA include walnuts, soybeans, leafy greens, flaxseed, avocado, and broccoli.

By eating a diet rich in these foods, people can reap all the benefits of omega-3 fatty acids without any of the side effects associated with fish consumption. Research has even shown that women who follow vegan diets have higher levels of omega-3 fatty acids in their blood than those who consume diets rich in fish, meat, and dairy.

4. Fish are full of pollutants

Because fish and shellfish live in increasingly polluted environments, toxins from the water accumulate in their bodies. Studies have shown that most of the fish throughout the world contain dangerously high levels of mercury. Exposure to mercury, which is a toxic metal, has serious health consequences, including increased risk for cancer, heart disease, and even death. A recent study revealed a link between mercury exposure and diabetes. Among nearly 3,000 participants, those who consumed the most mercury over an 18-year period had a 65 percent greater risk for developing diabetes. Fish also contain unsafe levels of polychlorinated biphenyls (PCBs), which are dangerous chemicals that have been linked to neurological problems and birth defects in babies who have been exposed. A plant-based diet automatically reduces exposure to these toxins.