A transition to a plant based food system would deliver an 80% reduction in agriculture emissions. This would result in a 58% reduction in emissions across these four sectors by 2030. 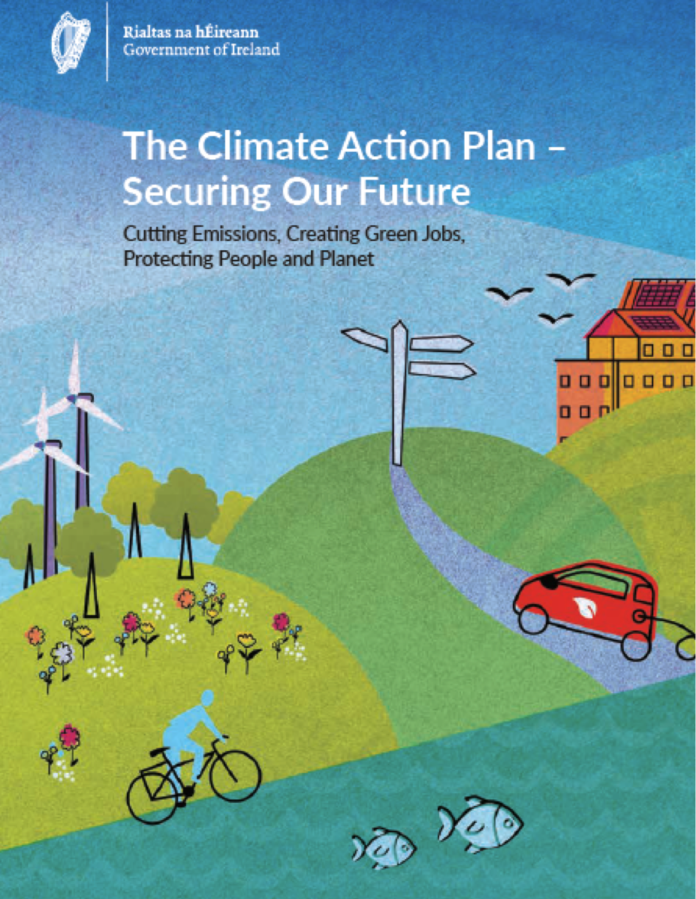 Globally, agriculture subsidies amount to €500 billion with a recent study showing that only 1% of them deliver ecological benefits.  Over a third of the EU Budget goes to farmers who make up just 3% of its population.  According to a Greenpeace Report in 2017 “between 69% (€28.5 billion) and 79% (€32.6 billion) of the CAP direct payments is directed to producers of fodder for animals, or goes directly to livestock producers as coupled support.” In this article we use Ireland as a case study to show how these subsidies are working directly against the many measures the Irish Government is implementing to deliver its goal of a 50% reduction in Green House Gas (GHG) emissions by 2030.

82% of Ireland’s emissions come from agriculture, transport, energy and residential.  87% of all energy used in Ireland in 2019 still came from fossil fuels.  The overall share of renewables in primary energy stood at 11.2% in 2019.  Ireland did not meet any of its EU mandated Renewable Energy Targets for 2020.  The Irish Government is claiming that it is reducing its transport emissions by mixing biofuels with diesel and petrol based on the EU’s discredited assumption that biofuels are carbon neutral.

The Irish Government has identified a range of actions across different sectors as shown below. This will be updated once the new Climate Bill comes into effect.

What is the likelihood of the government achieving the legally mandated 50% reduction by 2030? To assess this we will explore the potential emissions reductions for the main four sectors of electricity, residential, transport, and agriculture, which generate 82% of emissions.

Ireland plans to produce 70% of its electricity from renewable sources by 2030 – up from 32% in 2020. The below image shows the current sources of electricity production. To reach the 70% target the government plans to double its onshore wind capacity to 8.2 GW and install 3.5 GW of offshore capacity.  According to Wind Energy Ireland, this will cost “€8.6 billion” and €4 to €5 Billion respectively.  So lets say a total investment cost of €12 Billion.

The government plans to retrofit half a million homes which will cost €30 – €50K per home.  This includes the cost of a heat pump.  So lets say €40K per home costing €20 billion.  A portion of this will be paid for by the state (approx. €4 billion).  If achieved, residential emissions would be reduced from 6.5m tonnes to 4m tonnes by 2030.

According to the SEAI Energy in Ireland 2020 Report, transport continues to dominate as the largest energy-consuming sector accounting for 41% of energy related emissions.  Electric vehicles made up 3% of new private cars in 2019, but just 0.3% of the total stock of private cars, so not much progress so far.  The main government climate action for transport is to have one million electric vehicles on the road by 2030 (the expected fleet size in 2030 is 2.3 million vehicles).  This “could require up to €10 billion in state subvention – based on the current rate of €13,000 per EV”.  New electric vehicles cost over €35,000.  So this could cost individuals a further €15 billion assuming a second hand market gets established and prices fall.  It’s worth mentioning that when we use an electric car, we can reduce our fuel cost by 80% — that’s €2,000 per year based on a €50/week diesel fill.  But this will only deliver a 20% reduction in transport emissions as personal vehicles use just 40% of transport energy as shown below which would be a reduction of just 2.4 Mt.

Emissions from aviation and goods vehicles continue to grow.  The government also plans to invest in public transport, and working from home could have a significant positive benefit.

Irish agriculture produced 21.1 Mt of GHG emissions in 2019 compared to 18.7 Mt in 2005.  The current government plan for reduction in agricultural emissions is based on the Teagasc publication, An Analysis of Abatement Potential of Greenhouse Gas Emissions in Irish Agriculture 2021-2030.  The below diagram shows that, if farmers adopt all of the additional measures, there will be a 15% reduction in emissions by 2030 compared to 2019, far below the required 50% reduction.

But from 2014 to 2019, dairy cow numbers increased by 24.5% with just a minor decrease in the numbers of other cattle by 0.4%.  There has also been an increase in the numbers of sheep (+0.9%), pigs (+5.5%) and poultry (+9.6%).  As a result, the EPA expects agricultural emissions to continue to increase.  The government is subsidising these huge GHG emissions by €2 billion a year.  These subsidies come directly from the EU CAP System and indirectly through government measures including subsidies for agricultural diesel.

Potential of a Plant Based Food System

In Transition to an Irish Vegan Agricultural System I outline how moving to a plant based food system would reduce emissions by 17 Mt.  Obviously this would be a massive change but its benefits for biodiversity, climate and food security are unquestionable.  By converting 62% of our agricultural land (2.8 Mha) to permanent forest and native grasslands and wetlands we could sequester a further 15 Mt of CO2/yr.  Ireland’s Total Emissions would drop to 28 Mt per Year – a reduction of 53% just by profoundly changing our agricultural system.  If we stopped subsidising animal agriculture but maintain the payments at the same level for ecosystem restoration then we would see a significant change.  If farmers could keep their payments for these changes most farmers would experience increases in income.  For further information please see our website (Nature Rising) for supporting information.

The below table summarises the costs and projected reductions in emissions, leaving out emissions from the remaining sectors (industry, manufacturing, waste, etc.).

What this shows is that €67 billion of state, private and individual finance will be invested over the next ten years to meet Ireland’s climate goals.  The above measures will deliver about a 40% reduction.  But the common agriculture policy is working directly against these investments by investing in the most climate polluting food production system possible.

Animal agriculture is simply a cost that can no longer be afforded if Ireland wants to take its climate ambitions seriously and the EU CAP needs to stop undermining the Paris Climate Agreement for all our futures.

A study carried out by Professor Patrick Brown of Stanford University and Professor Michael...
Previous articleCarl Safina: What are animals thinking or feeling?
Next articleHow dangerous are Microplastics?