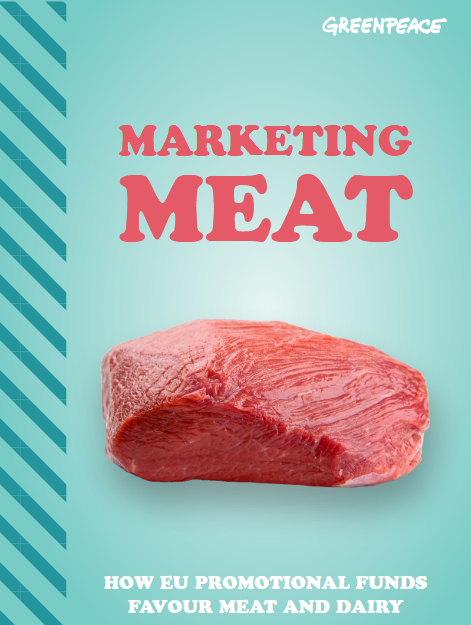 To tackle the ecological, climate and public health crises, meat and dairy consumption must fall,  but so far the EU commission has refrained from committing to scaling down the promotion of meat and dairy products.  Last reviewed in 2014, the policy’s objectives include no reference to advancing healthier diets among consumers, nor to promoting farming methods with less harmful impacts on nature and the climate.  The stated intention is clear: to increase consumption and sales.

Greenpeace is demanding that funding is aligned with the urgent need to shift European diets to protect public health, nature and the climate. In its report from 2021 entitled ‘Marketing Meat’, Greenpeace states:

“In the period 2016–2020, the EU spent €252.4 million to exclusively promote European meat and dairy products, 32%  of the overall €776.7 million  spending on the promotion of agricultural products in the EU and abroad.

Funding for campaigns promoting fruit and vegetables, or more plant-based diets, has been smaller.  Over the years 2016–2020, fruits and vegetables were promoted with only €146.4 million, 19% of the budget.

Promotional projects that included some organic food (but didn’t necessarily promote exclusively organic products) covered only 9% of all the EU funding in 2016–2019.

The objectives in the approved funding applications of several meat and dairy promotional campaigns funded by the EU explicitly state they aim to reverse declines in, or maintain the growth of, meat and dairy consumption in Europe – even if this reduction is much needed according to health and environmental research.”

Science tells us that to restore nature, avoid the worst of climate breakdown and protect public health, we must produce and consume much less meat and dairy.  The EU’s promotional programme is actively pushing consumption in the wrong direction.

The above extracts are taken directly from the Greenpeace report.

This month, the European Court of Auditors, the EU spending watchdog, pointed out that...
Previous articleReducing your Climate Footprint
Next articleState of the World’s Bird’s 2022 – from Birdlife International