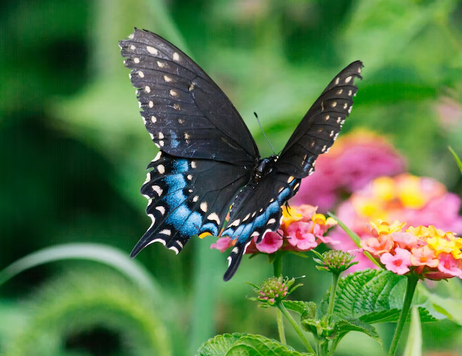 Scientists have discovered what is now believed to be the biggest plant anywhere on Earth. The plant – a type of seagrass known as Posidonia australis or ribbon weed – occupies about 20,000 hectares (77 square miles) of Shark Bay, a World Heritage Site off the west coast of Australia, and is believed to be about 4,500 years old. Genetic testing has shown that the seagrass ‘meadow’ is formed by a single plant, providing habitat for a huge array of marine species including turtles, dolphins, dugongs, crabs and fish. We should be particularly grateful: coastal seagrass beds protect shorelines by absorbing storm wave energy and sequester carbon up to 40 times faster than pristine tropical rainforest.

The Shark Bay ribbon weed takes over as the world’s largest plant from a clonal colony of an individual male quaking aspen tree (Populus tremuloides) in Utah, USA, which by comparison occupies a mere 43.6 hectares (108 acres). Pando, also known as the trembling giant, is estimated to weigh 6,000 tonnes (6 million kg) in total, making it the world’s heaviest known organism. Quaking aspen is the most widely distributed tree in North America and clonal colonies are common, so who’s to say that Pando doesn’t have an even larger sibling out there?

If you think that a clonal colony of ‘trees’ with an interconnected root system is a bit of a cheat, the largest known living single-stem tree in the world is General Sherman, a giant sequoia (Sequoiadendron giganteum) located in the Sequoia National Park of California. The tree has an estimated volume of 1,487 cubic metres (52,508 cubic feet) and is thought to be 2,200 to 2,700 years old. At 83.8 metres (nearly 275 ft) high, General Sherman is not, however, the tallest living tree, an honour that goes to Hyperion, a coast redwood (Sequoia sempervirens) also found in California, which measures 115.92 metres (380.3 ft) in height, but is a relatively puny 530 cubic metres in volume.

So much for arboreal superlatives, but does any of this matter? “If we are to successfully tackle the climate emergency … we need to plant trees – lots of them and as fast as we can”, writes Bill McGuire, Professor Emeritus of Geophysical and Climate Hazards at University College London, in an article for the Word Forest Organisation. However, as he points out: “The singular act of planting trees alone just won’t cut it. Saplings need to be protected and well managed, particularly in the early days when they’re setting down their roots.” In other words, tree planting schemes require nurturing and management of the trees, a consideration that governments, local authorities and NGOs need to bear in mind.

Britain has committed to planting 30,000 hectares of trees per year by 2025, but current planting rates are well below the target (only 13,000 hectares of new trees were planted in 2021, mostly in Scotland). Indeed, with felling rates exceeding replacement rates, the amount of carbon dioxide absorbed by the UK’s woodland is projected to decrease by 25% by 2025 compared with the peak reached in 2009. We also need to do more to protect existing trees and woodland, with a recent newspaper article identifying overgrazing by sheep and deer as a major barrier to the regeneration of woodlands in the UK and other countries. In the words of Rewilding Britain’s Richard Bunting: “Britain remains one of Europe’s least wooded countries, and we urgently need to turn this around.”

Successful replanting schemes can be done.  Carrifran is a 1,600-acre ice-carved valley in the Moffat Hills in the southern uplands of Scotland, one of the country’s least populated regions. In 1996, plans were put together by the Borders Forest Trust to restore woodland in the glen.  Sheep grazing was brought to an end, and on 1 January 2000 the first trees were planted, while a boundary fence was erected to prevent deer from grazing on the saplings. The transformation is profound. The pictures below show, on the left, bare landscape at Carrifran before planting (2004), and on the right, newly planted trees in Carrifran indicating a return to forest cover (2013).

Also in Scotland,“Glen Finglas estate was a hill farm that had been heavily grazed by sheep when it was taken over by the Woodland Trust charity 25 years ago.  Now, after extensive work to plant over a million trees and repair peatlands, it is a thriving wildlife site, home to myriad species – including black grouse, beavers, golden eagles, pine martens, otters and red squirrels.” The pictures below show Glen Finglas ‘before’ and ‘after’ one million native trees were planted and extensive restoration work carried out.

The complete lack of any regulation of the exotic pet trade is a major...
Previous articleThe EU needs to address Agricultural Methane Emissions
Next articleWhat the Puck? An attempt to unpack the Puck Fair and public response