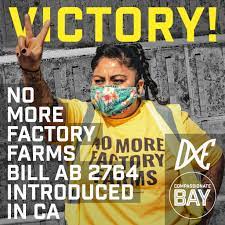 Following the EU’s launch in February of a 4 billion euro Beating Cancer Plan, the Parliament has adopted a resolution in support of a healthier, plant-based diet and reduced consumption of meat.  Cancer is Europe’s second biggest killer with 1.3 million deaths every year – a quarter of the world’s cancer cases, despite constituting only an eighth of the world’s population.  The resolution stresses that individual cancer risks can be reduced by an increased consumption of plant-based foods, such as fresh fruits and vegetables, whole grains and legumes.

It also calls for greater investment in non-animal-based testing methods in cancer research.  Animal use in experimentation is increasing despite the very poor translation of animal data to human use.  95% of the drugs that seem to offer hope for cancer treatment when tested on animals fail in human trials.

EU Ban on Routine use of Antibiotics but will Enforcement Fail?

A European Union (EU) law to ban the routine use of antibiotics was introduced in January, 2022. But, like many other EU livestock regulations, critics fear the new law will be flouted.  Intensive farming relies on antibiotics, also known as antimicrobials, to prevent animals from getting sick in farm conditions that create disease due to imprisonment, crowding, stress, poor ventilation, limited access to nature, etc.

If the ban were properly enforced it would “effectively end cheap animal protein and intensive animal farming,” said Peter Stevenson, a lawyer with NGO, Compassion in World Farming. But, he said, “given the huge business interests involved in both the livestock and pharma sector” there is every reason to think enforcement will fail. You can read more in a Sentient Media article here.

A study carried out by scientists from the universities of Stanford and Berkeley demonstrates that ending animal agriculture and planting trees on the empty fields “is our best and most immediate chance to turn back the clock on climate change.”

Professor Patrick Brown of Stanford University and the chief executive officer of vegan food brand Impossible Foods, and Professor Michael Eisen of the University of California, Berkeley, who is a consultant for the company, modelled the impact of a global end to livestock farming.

The study says that the effect on global warming would be the same as reducing carbon dioxide emissions by two thirds, and that their plan would take the planet half way to the net emissions reductions needed to limit global warming to 2°C, the minimum threshold for avoiding the worst impacts of climate change.

They say livestock farming needs to end within 15 years – a time frame which Professor Brown said was “not unrealistic”.  You can read our full article on their research here.

Assembly member Nazarian said, “These operations have a notorious track record of poor working conditions where health and safety are sacrificed for the maximum profit.”  Assembly member Alex Lee (D-San José) who is also a joint author on the bill commented “I’m proud to be joint author of AB 2764. Mass industrial slaughterhouses impose inhumane cruelty on animals and workers and have detrimental environmental and health impacts.”

Groups are organising to ensure that the Bill gets passed.  A key step will be for the bill to be approved by the State’s Agriculture Committee.  You can get involved in this campaign, especially if you live in California, with the organisations listed above.

Netherlands announces Plans to cut Livestock Numbers by a third

The Netherlands has proposed a radical new plan to take on climate change by reducing its livestock herd.  The €25 billion plan, unveiled by the Dutch government in December, 2021, involves buying out farmers in order to slash cattle herds over a 13-year period.  Livestock farmers will be compensated if they voluntarily leave the industry or transition to less intensive forms of animal farming. You can read our full article on the proposal here.

Greenpeace has welcomed the plan: “Some call it a radical plan – but what’s really radical is continuing to allow intensive dairy corporates to pollute our rivers, poison the drinking water of local communities, and blaze the climate – all in the interests of private profit”, a spokesman for the environmental group said.  The proposals have been met by criticism and protests within the Dutch agriculture community.

On February 8th, 2022, the UK Scrap Factory Farming campaign (SFF) went to court to seek a judicial review into the government’s approval of factory farms.  The campaign contends that the government is failing to consider evidence that keeping animals in intensive farming conditions is a serious risk for the emergence of new zoonotic diseases and antibiotic resistance. The scientific community recognises these risks but the UK Government has not yet incorporated this reality into their decisions even though they have a duty to protect their populations.

The hearing at the Royal Courts of Justice in London was a world first as a legal challenge to a government on the issue of intensive animal agriculture. However, the Judge agreed with the UK government’s position that the regulations are adequate to deal with the risks and scrutiny is not needed.  SFF plans to appeal the judge’s decision not to grant the review.

“Today we lost in court in our Scrap Factory Farming legal challenge. We all know that our chosen pathway is not an easy one but the only defeat would be not to try at all. We lodge now for appeal,” said Jane Tredgett, founder of Humane Being, the non-profit group behind the SFF campaign.

The Scrap Factory Farming crowdfund campaign, which has already raised over £41,500 via Crowdjustice.com, continues.

New research has found that the world’s governments spend $1.8tn in subsidies which are harmful to the environment. Of the $1.8tn in subsidies to all sectors about $0.52 trillion is spent every year on agriculture payments which are driving the annihilation of wildlife and contributing to global warming.  Government subsidies for animal agriculture are working directly against the goals of the Paris agreement and draft targets on reversing biodiversity loss, the study says.

The authors of the report say a significant portion of the $1.8tn could be repurposed to support policies that are beneficial for nature and a transition to net zero.  The report calls for governments to agree a target to eradicate environmentally harmful subsidies by the end of the decade at the upcoming Biodiversity COP15 gathering in China later this year.

Iceland to end Whaling from 2024

The Icelandic government has signaled an end to whaling with the announcement that no new quotas will be issued for the industry.  A number of animal advocacy organisations have worked closely with Icelandic advocates, researchers and ecotourism operators since the country resumed whaling in 2006 after a 13-year hiatus.  More than 1,500 fin and Minke whales have been killed in Iceland since that time.

For the past 3 years no commercial whaling has taken place in the country’s waters.  Japan was the biggest export market but consumption of whale meat in Japan has been declining for many years.  Iceland’s Minister for Fisheries said the lack of economic benefits was a key factor in the decision to no longer issue licences after existing quotas expire in 2023.