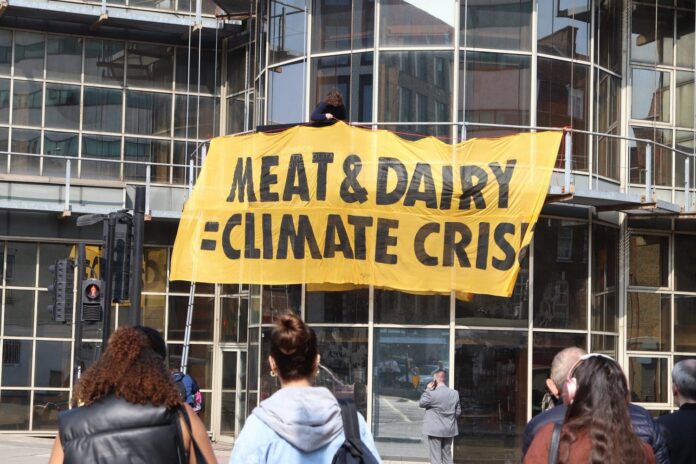 Haarlem, about ten miles from Amsterdam, will become the first city in the world to ban the advertising of meat in most public spaces. That could include everything from supermarket chicken to fast-food burgers.

The ban has been drafted by green political party GroenLinks and could come into effect as soon as 2024. Opponents of the ban – many of whom are, as you’d expect, from the meat sector – say it’s patronising and that it would stifle free speech.

Haarlem’s policy is part of a wider ban on advertising things that increase fossil-fuel consumption. It also includes things like holiday flights and cars, as well as advertisements for oil and gas.  It is not the only city to have done so.  Amsterdam has banned ads from fossil fuel and aviation companies, while Norwich in the UK has also banned adverts for ‘environmentally damaging’ products.

Catastrophic declines in the number of birds and other wildlife are likely if countries do not act urgently to change the way animals are farmed, wildlife health scientists have warned. The unprecedented die-off of seabirds from highly pathogenic avian flu (HPAI) being witnessed in breeding colonies across Europe, North America and Africa has been traced back to a commercial goose farm in southern China in 1996.

A poultry farm worker in Spain is reported to have tested positive for avian flu. It is the first case in Spain and the second in Europe after a UK case in December 2021. It comes as new figures reveal the “unprecedented” number of cases of avian flu this summer across the UK and Europe. Almost 50 million farm birds have been culled, with cases reported from Norway’s Svalbard islands to southern Portugal.

A new survey by grassroots organisation Stockfree Farming has found that most Scottish farmers are willing to move away from livestock rearing – for various reasons, including the environment and climate change.

The survey asked 51 farmers and from across Scotland a series of questions over a 12-month period between 2021 and 2022.  64% of respondents said they were willing to entirely move away from livestock if financial supports were in place to allow them to do so.

80% demonstrated a willingness to reconsider their focus areas, in light of the increased  demand for plant-based foods. “It seems we are reaching a tipping point where more people are realizing that growing valuable protein to feed animals which are then killed to provide less protein, in a less healthy form, is an outdated model,” one farmer said.

Despite being willing to ditch animal agriculture, many participants cited a lack of financial support for arable farming as a primary reason for not embracing it.  53% of respondents have already diversified their interests, taking up farm shops, conservation and renewable energy production to subsidise their income.

New York City Hospitals to Serve Plant Based by Default

New York City Mayor Eric Adams announced a revolutionary plant-based initiative — one that was quietly rolled out six months ago and has been chugging right along without a hitch. New York City is serving plant-based meals by default at all eleven of the city’s hospitals.  Beginning in March of this year, NYC Health + Hospital’s eleven campuses began offering 2 plant-based “Chef’s Specials” each day for lunch.  If patients want neither of the specials, they are then offered a wider array of choices that includes both meat and vegetarian options.  The approach aims to nudge patients toward healthy, more sustainable eating.

Nature may get Constitutional Protection in Ireland

Ireland’s Citizens’ Assembly on Biodiversity Loss has voted overwhelmingly to recommend that there should be a constitutional referendum to amend the constitution with a view to protecting biodiversity.

The assembly concluded that the State has comprehensively failed to adequately fund, implement and enforce existing national legislation, national policies, EU biodiversity-related laws and directives related to biodiversity. It said this must change.

For people, such an amendment if passed in a referendum, would confer a constitutional right to a clean, healthy, safe environment, a right to a stable and healthy climate, and rights of future generations to these or other environmental rights.

For nature, the proposed constitutional change would recognise nature as a holder of legal rights, comparable to companies or people. It would also give nature the right not to be polluted, harmed or degraded.

Stirling University Students’ Union has become the first in the UK to ban meat and dairy products from its campus.  The motion aims to have 50% of the university’s options being plant-based by the 2023-24 academic year, and to be serving only plant-based food by 2025.

The move was proposed by the Plant-Based Universities (PBU) campaign, whose co-founder Nathan McGovern said that the transition to a plant-based food system was the “key solution to the climate crisis”.  “The students’ union is setting a gold standard in environmental policy for other universities to follow”, McGovern said.

The campaign and has been supported by BBC presenter and conservationist Chris Packham and environmental activist George Monbiot.  Monbiot said it was “fantastic” to see the next generation taking control of their future, adding: “the Plant-Based Universities campaigners at the University of Stirling are leading the way in tackling the climate crisis and creating a sustainable food system.”

New Zealand will ban live animal exports from next April, two years after storms sank a livestock ship, killing 41 crew members and 6,000 cattle. The death of two New Zealanders among the crew of the Gulf Livestock 1, which sank in a typhoon in September 2020, helped galvanise the movement to ban exports of live sheep and cattle.

Calls are growing for an EU ban on the live export of farm animals after a botched shipment of calves from France to Algeria.  The young bulls were destined for slaughter but unloading was refused because of incorrect health certificates. The bureaucratic spat lasted three weeks, leaving the bulls stuck on the vessel before being “emergency killed” back in France.

How do we escape from an economy that is based on continual growth, while at the same time ensuring social well-being and planetary sustainability?  A new international study led by the Institute of Environmental Science and Technology of the Universitat Autònoma de Barcelona and the University of Lausanne in Switzerland will address this question.  The project is being funded by a €10 million grant from the European Research Council (ERC).

Over the next 6 years, the project will produce “A Post-Growth Deal”, which promises to advance ecological economics in radical new directions.

To reduce emissions fast enough to meet the Paris targets, and to reverse other ecological pressures, high-income economies will need to dramatically reduce their use of energy and material resources.  But sufficient reductions may be difficult to achieve if countries continue to pursue economic growth.

Scientists increasingly recognize the need to explore post-growth pathways. Recent calls for post-growth transition have been discussed in major reports by the Intergovernmental Panel on Climate Change (IPCC), the UN panel on biodiversity (IPBES), and the European Environment Agency.  But the existing knowledge base cannot yet meet this demand.

“This project is nothing short of revolutionary”, said Julia Steinberger, ecological economist at the University of Lausanne. “It gives us what we think is the best chance to explore the transformative ideas necessary to protect humanity from the intertwined crises of the coming decades: to reorient our economies away from risky growth dependence, and towards human flourishing.”