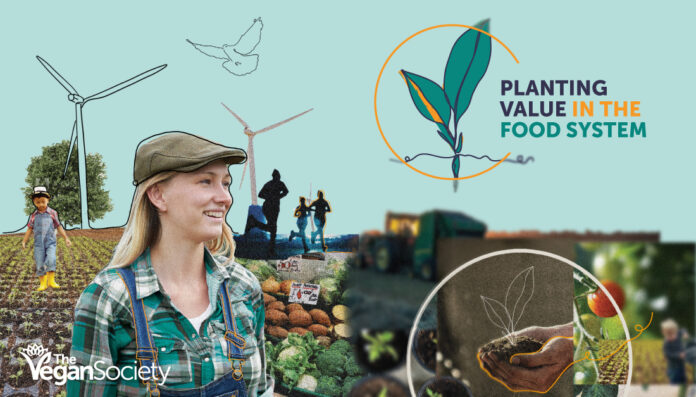 The Vegan Society launched its report Planting Value in the Food System at a meeting of the All Party Parliamentary Group for Vegetarianism and Veganism (VegAPPG) on the 15th of July 2021. The meeting was chaired by the vegan Labour MP for Neath, Christina Rees, and featured the report’s author, Dr. Alex Lockwood from the University of Sunderland, Vegan Society CEO Louise Davies, Dr. Helen Harwatt, senior research fellow in the Energy, Environment and Resources programme at Chatham House, and Alexandra Clarke, an advisor at Veg Capital.

The two-part report presents the Society’s vision for a vegan food system and how it might be realised. Part One sets out the Society’s legislative proposals, while Part Two describes “the research”, drawing on interviews with farmers, environmentalists, food producers and food policy experts, and a review of more than 50 reports on the state of the UK food environment. This article describes the first part.

The report maintains that after seven decades following a ‘productionist’ model, in which farmers were encouraged to produce as much food as possible, with an emphasis on efficiency and high yields, the current UK food system is “unhealthy, unsustainable and unfair … over-reliant on overseas producers – with poor health impacts spread unequally through society, a destructive environmental inheritance, [and] a continued and unsustainable use of animals.” Adopting a multi-criteria approach to food policy, the report recognises the need for farmers to shape policy and practice within a plant-based (vegan) food system that provides fairness for all, including non-human animals, and real ‘public value’.

In order to achieve these lofty aims, the Society proposes two new Bills, intended to lead to Acts of Parliament to be implemented within the next six years “to bring UK food policy into alignment with existing legal commitments to tackle climate change and achieve the 2030 Sustainable Development Goals. The first of these is a Food Sustainability Bill covering the key areas of health, economy and just work, environment and climate, social and cultural values, governance and food quality, and including the establishment of a National Food Sustainability Council. This would be followed by a Well-being of Future Generations Bill for England, Scotland and Northern Ireland, inspired by the Act adopted by the Welsh Assembly in 2015 and a Bill introduced by Green Party MP Caroline Lucas in March 2020, extended to include the appointment of a “Plant-Based Transition Commissioner”.  Eventually, as society transitions towards a plant-based diet, the report envisages an End to Animal Slaughter Bill “beyond 2030”.

Would a UK government ever pass any of the proposed legislation?

Aside from the handful of vegetarian and vegan members of VegAPPG it is difficult to see where parliamentary support for the proposals will come from.  The vegan / animal rights movement will need to develop much greater political power for this to happen.  However, the report presents “a vision” of the future and the Vegan Society is to be congratulated on seeking the views of a wide range of experts in making a worthwhile contribution to the debate on the UK food system.

The Government-commissioned National Food Strategy for England, was published on the same day as the VegAPPG meeting.  Although the report falls well short of the Vegan Society Vision, it is at least a step in the right direction. The National Food Strategy sets a goal of a 30% reduction in meat consumption over the next 10 years and a 30% increase in intake of fruit and vegetables. Achieving these targets in the face of apparent Government indifference, hostility from some sectors of the food industry and powerful voices within the farming community will be difficult enough.  However as the costs to society of reducing GHG emissions by 50% by 2030 become clearer, governments may well be forced to look for food system transformation where significant emissions can be achieved for much lower costs and with many additional benefits.

Grow Green: This report from the Vegan Society UK outlines the ways that a transition...
Previous articleEuropean Parliament approves budget to continue the destruction of nature at sea
Next articleThe EU moves to ban Cages for Farmed Animals