Extracts from the Report, High Steaks edited by James O’Donovan. 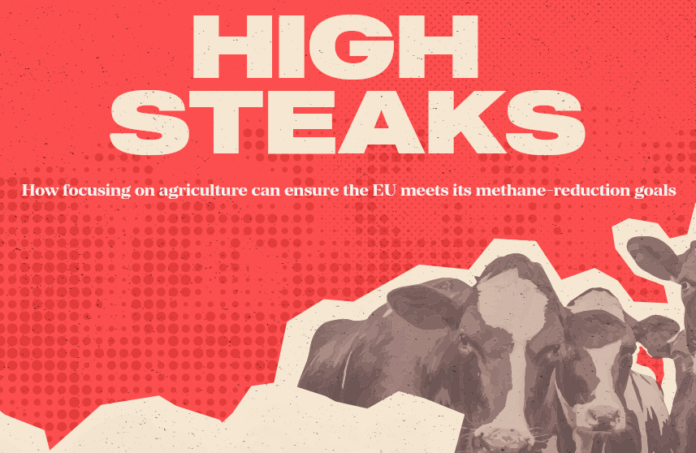 ‘High Steaks: How focusing on agriculture can ensure the EU meets its methane reduction goals‘

This report presents information on methane emissions in Europe and critiques the EU’s legislative approach for reducing methane in the agricultural sector.

In the EU, domestic anthropogenic sources of methane emissions amount to 15.2 megatonnes (Million tonnes Mt) per year. This is roughly equivalent to the total emissions from 100 coal-fired power plants. The majority of methane emissions come from three sectors, agriculture, waste and energy. In 2019, 53% of emissions came from the agricultural sector (largely from meat and dairy production as cattle contribute a disproportionate proportion of these emissions), 27% from the waste sector and 13% from the energy sector.

Despite agriculture’s being the largest emitter of methane in the EU it is also the sector that current EU policies neglect the most. From now to 2030, a mere 3.7% reduction of non-CO2 emissions (including methane) in the agriculture sector is expected under current policies and developments.

EU policies are increasingly turning to fostering anaerobic digestion of manure in digestion units. This allows manure to be converted into biogas, which, once upgraded to biomethane by removing CO2 and other gases, has a gas composition similar to that of natural gas. The sooner manure is digested, the lower the methane emissions from manure storage. However, methane emissions are also released from the digestate (the material remaining after anaerobic digestion), and methane leakages occur during the digestion process, which is why a limited methane reduction was estimated for these measures. It is worth noting that anaerobic digestion, because of the economic incentive from biogas production, can have the perverse effect of increasing livestock production, and therefore methane emissions overall (especially because livestock’s enteric fermentation contributes far more than their manure).  According to the non-vegan organisation Feedback, “The Anaerobic Digestion (AD) industry – which produces “biogas” from organic wastes and crops – at best provides a sticking plaster to problems like food waste and the intensive livestock industry, and at worst it is actively expands polluting industries. We need to redirect the millions in public subsidies currently spent on AD to better causes like preventing food waste, planting trees, solar and wind energy and dietary shifts to plant-based diets.”

In 2020, the EU Methane Strategy was adopted, which sets out plans to cut methane across all three high-emitting sectors (energy, agriculture and waste). The European Parliament welcomed this and, in October 2021, called on the European Commission to propose a fair, comprehensive and clear legislative framework, setting binding measures and methane-reduction targets across all sectors. The EU is also an instigator of the Global Methane Pledge, and must therefore set an example by adopting ambitious policies to drive methane reductions across all three sectors.

However, the European Commission’s current efforts to reduce methane emissions in the agricultural sector lack ambition and urgency, despite significant potential. While the revision of the Industrial Emissions Directive (IED) to include large cattle farms is a step in the right direction, this will have very limited impact by 2030. In addition, the IED proposal foresees a “lighter permitting regime” and many exclusions from general obligations and enforcement rules under the IED which create significant loopholes. Strategies laid out in the REPowerEU plans to increase biomethane production from manure will also have limited impact.

Equally, strategies to include the agriculture sector in Land Use, Land Use Change and Forestry, so as to balance emissions with carbon sinks and ‘reach climate neutrality by 2035’, risk hiding true emissions from the agricultural sector post-2031 and will fail to incentivise absolute reduction in methane emissions from animal farming.

This report explores three scenarios representing different levels of ambitions in terms of EU methane-reduction targets: A 30% reduction as committed to in the Global Methane Reduction Pledge, a 45% reduction of EU methane emissions, as recommended by the UNEP Global Methane Assessment and the ‘maximum potential scenario’ where all methane-mitigation measures are included. The report identifies the mitigation measures that would be needed to achieve these three targets.  To achieve the greatest reduction in methane, 100% of EU consumers would need to switch to a diet that aligns with dietary guidelines (a 50% reduction in meat and dairy), and all the other technical measures across the three sectors would need to be implemented. This scenario would lead to a reduction of 49–68% in the EU’s annual methane emissions – as much as 7.5 to 10.3 Mt per year.

Crucially, none of these scenarios can be realised without implementing policies that drive the uptake of measures in the livestock agriculture sector. The adoption of healthier consumer diets alone could reduce EU methane emissions by 15–19%.

Editor’s Note: The report does not consider the greater reductions possible with a fully plant based food system nor does it estimate the carbon sequestration potential of restoring ecosystems on the agricultural land freed up by this action.

When did you set up the Vegan Land Movement, and what prompted you to...
Previous articleEuropeans Undermine Nature and Global Food Security
Next articleNature Needs Room To Flourish